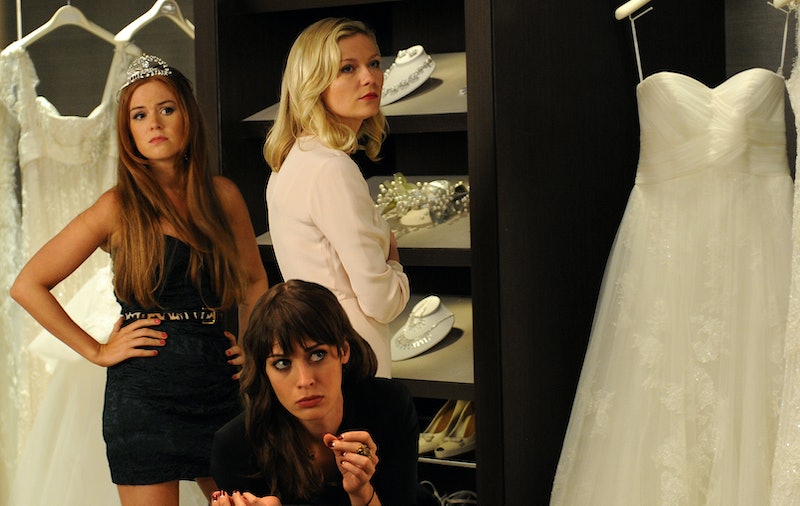 It's hard to believe that women didn't really have bachelorette parties until the 1960s, when they decided they wanted to get in on the pre-marital rowdiness just like the boys. However, those bachelorettes definitely weren't like the parties thrown today. They were more of a wedding shower where the bride could get lingerie instead of kitchenware and dishes. According to Vicki Santallino of Divine Caroline, it wasn’t until the 1980s and 1990s that bachelorette parties acquired the reputation of being as wild as their male equivalents.

And it seems like every year bachelorettes get more extravagant, taking place in exotic destinations and involving multiple activities over several days. There is nothing wrong with going all out for a bachelorette — after all, these are the brides' last days as a single woman. But there are some pitfalls you should avoid when planning one of these parties — or even attending one:

Unless a bride specifically requests one (or you know her sense of humor really well), don't hire a stripper. (Plus, they can cost a lot. Plus, none of them look like Channing Tatum.)

Monica Murphy, co-founder of shoe company The Solemates, whose heel attachments keep wedding guests from sinking into lawns, has become something of a wedding expert. She advises Bustle readers not to use a bachelorette weekend as a way to embarrass the bride-to-be about ex-boyfriends (no trivia games where they might be the answer) or other things she may be uncomfortable talking about.

According to USA Today, 69 million Americans will attend at least one wedding this year, and they expect to spend a lot on them. According to a 2013 American Express Spending & Savings tracker, on average you can expect to shell out $539 per wedding! From travel ($167) to apparel ($161) to the actual gift ($108), it adds up quickly. And that's just if you're attending! If you're in the wedding (or a very close friend of the bride), you also have to pay for a dress and definitely a shower gift and now the world's most elaborate bachelorette? If you are planning a bachelorette, keep in mind that not everyone can or wants to spend all of their spare cash on one party and choose the venue and activities accordingly. For instance, if the wedding requires travel, try to do the party locally.

And if you are a guest being asked to spend a lot of money, reach out to the organizer (not the bride) and talk about other options. Maybe if it is a weekend getaway, you only come for one night or suggest alternative cheaper activities. Spending more money doesn't mean you love the bride more.

Don't Get the bride in trouble

Murphy advises not forcing the bride to do anything that, if photographed, could call the wedding into question. Good advice, no?

Along those lines, not every photo from the night or weekend needs to be shared with the world. Lifestyle guru Lauren Conrad (an upcoming bride) recently wrote on her blog, “Bachelorettes can get a bit wild (depending on who you’re with and who you’re celebrating), and some of the photos you take should never see the light of day.” If LC says it, you know it's the truth. You may want to set some rules on social media before the party.

Don't make it your intention to get wasted

This is supposed to be a memorable event, so it would be nice to actually remember it. Drinking can definitely be a part of the festivities, but don't make the whole purpose of the bachelorette to get obliterated. You especially don't want the bride getting so drunk that she may embarrass herself in front of any of the groom's family members who may be attending.

Unless you're having a combined bachelor/bachelorette for the groom and bride together (an increasingly popular option), try to keep the guest list female-only. Bachelorettes often end up being unofficial celebrations of the bride's female friendships, and a party attended by her straight male friends won't have that vibe. Including her gay male friends may feel like the right thing to do, but keep in mind that gay men aren't women and won't necessarily appreciate being referred to or treated as "one of the girls." When in doubt, ask the bride who she wants on the guest list.

Don't make it about you

Yes, it seems like you are celebrating the bride a lot these days, but the bachelorette really needs to be about her and what she wants to do. Don't plan activities that are your favorite, but not hers.

This is also not the time to dredge up old arguments or how you really feel about your bridesmaid dress. Even if you can't stand the brides' friends or relatives, do not be the one who stirs the pot.

Do not wear white

Sorry if you like white ensembles, but the bride has dibs on that color for the bachelorette, too. Plus, do you really want to wear something that would be ruined if you spilled on it?

This seems harmless, but unless the bride is stone cold sober or the most delightful drunk on earth, this is probably just not a good idea. She can relay selected highlights after the party.

More like this
Black Women's Equal Pay Day Highlights An Upsetting Problem
By Brandi Neal
'Survivor' Host Jeff Probst's Salary Per Season After 22 Years Is The Real Winner
By Hugh McIntyre
Where Is Former Bachelor Host Chris Harrison Now & What Is His Net Worth?
By Hugh McIntyre
10 Ways To Be More Empathetic To Your Partner
By Raven Ishak and Lexi Inks
Get Even More From Bustle — Sign Up For The Newsletter