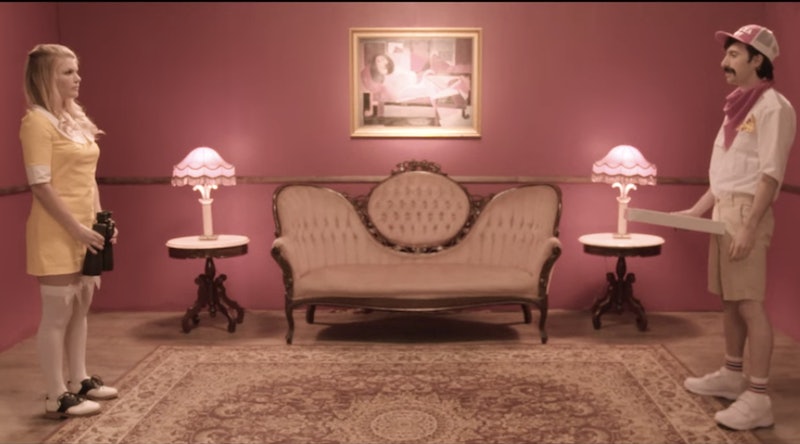 Sebastian then finds a woman, with a striking resemblance to Suzy from Moonrise Kingdom, inside the apartment, looking through a pair of very large binoculars. While the video is only three minutes long, the awkwardness stuffed into that short window is rather impressive. Any fan of Anderson's flicks (or really anyone who can appreciate some serious sexual innuendo) is sure to find this parody hilarious.

And just wait for the unexpected visitor at the end. You'll be amazed by the uncanny impression of your favorite Midnight In Paris actor. I guarantee it.

Image: The STATION by MAKER

More like this
12 Aphrodisiac Desserts To Spice Up Your Valentine’s Day
By Kaitlyn Wylde
Learning To Love, Not Judge, The Lunchbox Wives Of TikTok
By Esther Zuckerman
18 Hinge Prompt Answers To Try If You’re Looking For Something Casual
By Lexi Inks
Dunkin’s Valentine’s Day Lineup Includes A Drink That Tastes Like Dessert
By Alexis Morillo
Get Even More From Bustle — Sign Up For The Newsletter
From hair trends to relationship advice, our daily newsletter has everything you need to sound like a person who’s on TikTok, even if you aren’t.