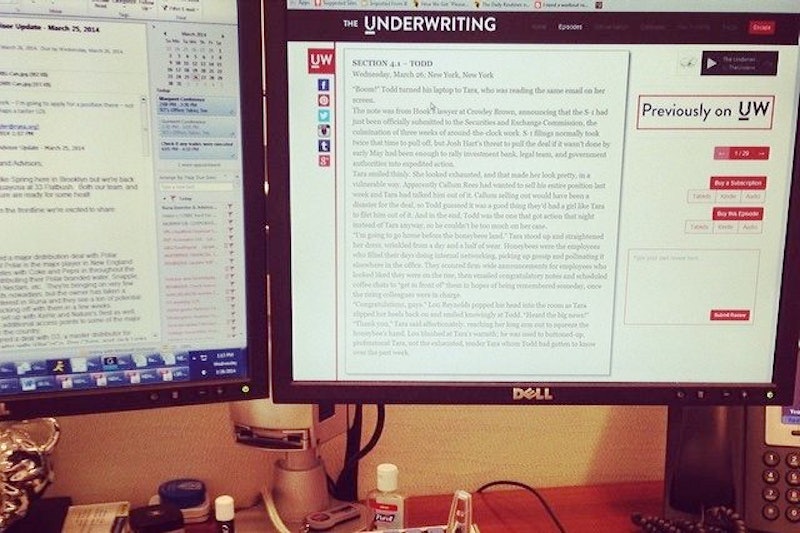 A former Chase banker may be changing the face of commercial publishing with her first novel — well, with the help of some venture capitalists, who are probably having a series of heart attacks about how they just invested in something involving the word fiction.

Michelle Miller worked long hours at JP Morgan, clicking through list after Top Ten list, and missed reading something, anything, with narrative. But her big book idea came to her while she was doing something much more housewife-with-vodka-martini-at-3-P.M.: watching the soap opera All My Children. Miller began musing about how soap operas have been getting people to tune in at a certain time each week for decades, and wondered why a model like that couldn't work for fiction.

So she came up with a catchy story. It's called The Underwriting, and it's about "Wall Street, Silicon Valley and urban life in the digital age." But Miller decided against finding an agent, pitching to publishing houses, or even self-publishing through a company like Amazon. She released The Underwriting under her terms — as something that she calls an "e-series." Every Wednesday, a new chapter is uploaded to the story's website; it's free for 24 hours, then available for $1.50. (You can also subscribe to the "season" for $10.) When readers purchase an episode, they also get a deal with that week's sponsor, like the hotel app Hotel Tonight. In short, it's like a soap opera, but on the (e)-page.

This would sound like a total vanity project (anyone with an Internet connection can "release" one chapter a week; it's called "getting a free Blogspot account"), except for the fact that Miller has people backing her up. She raised money from angel investors and venture capitalists, then hired a team: editor, designer, photographer, composer, web developer, and audio narrators. As Miller told Venture Beat, she's making more money off of this web-based format than she would if she'd published with Amazon.

Is it quality writing? No. But what's interesting about Miller's method is that it may provide a much-needed stepping stone between the self-publishers and the traditional publishers, who have been at teeth-baring odds with each other for years. With Miller's "e-series" format, the writer gets far more creative control — and royalties! — than he or she would with a traditional publishing house, but the venture capitalist backing makes the project seem more legitimate than self-publishing.

The problem, of course, is that it's not just a non-traditional mode of publishing — The Underwriting requires a non-traditional mode of reading. Miller may have craved narrative after her long days at JP Morgan, but The Underwriting isn't a book you can come home to and curl up with. It's exactly like waiting for the next episode of Mad Men to be released; thrilling and tantalizing, but highly unsatisfactory. To be fair, Charles Dickens published his work in serial form, so serialization doesn't automatically mean a lack of narrative heft or less reader engagement. Still, Dickens wasn't publishing on the Internet.

It's likely that unknown authors will find it difficult to raise the financial backing necessary to provide a polished online experience, the way The Underwriting does. ("Hire a photographer?" "Get a sound guy?" Let's start with "Look into health insurance.") However, this could be a lucrative publishing model for established authors who are fed up with both self- and traditional publishing. An author with a giant following could make some serious money off an e-series — can you imagine Stephanie Meyer serializing a new Twilight book on her own personal website for $1.50 a chapter? It's less likely that the e-series format will be a publishing game-changer for literary fiction — no one wants to read Infinite Jest in 10-minute chunks once a week — but for commercial fiction and established writers, the idea of creative control and enough money to buy that gold standard health insurance is surely appealing.