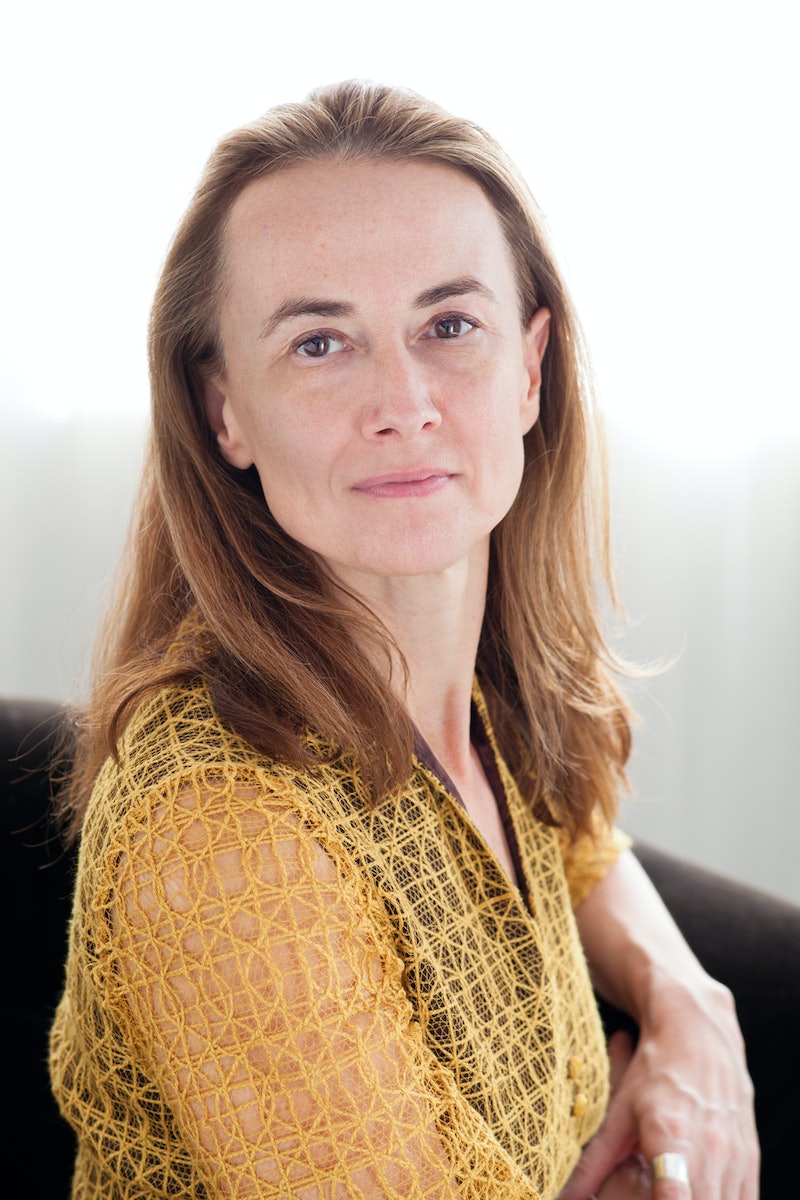 Who hasn’t at some point or another fantasized about becoming a rock star? Been curious or fascinated by the luxurious life of a musician on the road? It’s a dreamy, “when I grow up” scenario to which many of us can relate. Author Stacey D’Erasmo too, while not musically inclined, found herself interested in the complicated world of rising musicians, most significantly the notion of “making a comeback."

In her latest novel, Wonderland, she explores that dreamed-of world through the eyes of 44-year-old Anna Brundage, an indie musician who, after achieving a significant amount of musical fame and then taking a seven-year hiatus, makes an attempt to reenter the cultural scene.

D’Erasmo talked with Bustle about touring Europe with an indie rock band, belting her favorite go-to karaoke songs, discovering what it means to make a comeback, and feeling like a rock star.

BUSTLE: So what sparked the idea for this novel and why did you choose this particular protagonist?

STACEY D'ERASMO: I kept noticing this phenomenon of people actually making a comeback. Probably the biggest example of that in music would be Patti Smith who left for 10 years and has had this whole second career. I was noticing that there were other musicians who also had come backs, like Lee Bontecou who was off the scene for decades, so what interested me initially was, what is that moment of coming back like, and trying to actually do something new?

For some reason the protagonist was always a musician. I don't know why because I'm not a musician at all and its not a world I knew all that much about, but that was my first thought, possibly because for an indie musicians, or really any kind of more popular musician, it's a miracle, right? It's incredible. I mean, people are lucky if they last six months, and yet every once in a while there's someone who just comes back, is a legend, and i was just very interested in trying to get inside that experience.

I wanted to soak it all in. Everything about being on stage.

You mention that you're not a musician at all — don't play any instruments, were never in a rock band as a teen. What kind of research did you do to prepare for this novel?

The boring part of the research was I read a bunch of biographies and autobiographies, things like When I Grow Up by Juliana Hatfield and Keith Richards's book Life, although none of that was boring to me … I would also go around to gigs with musicians and talk to them. Then I went on the road with Scissor Sisters. That was fantastic and invaluable. We were in Europe and the Scissor Sisters were very big in Europe. I had been looking for a kind of ratty tour actually, but what I got was a deluxe tour, so I had the best traveling experience I may ever have in my life. It was just so fun on a personal level and everything about that experience was completely interesting. It was all new to me and I would just fill up my notebook with details, like, what does a tour bus look like? It's actually not that messy and there are rules because people are in close quarters for what can be a long time. It's like collective living but on wheels.

I wanted to soak it all in. Everything about being on stage. I would just walk around and annoy people with questions and watch everything.

We all have an idea in our head of what touring is like. What did you find most surprising or unexpected?

One thing was how much down time there is … on one level its a different city every day or every two days, so that's quite fast, but on a daily level there can be hours that go by and the feeling that that produced, I mean you’re so far out of ordinary life and there’s something really pleasurable about that. You're everywhere and nowhere at the same time.

The other thing that was really astonishing was that I would often go and stand in the wings during a show … I had never experienced this before because I'm a writer. I don't read for 20,000 people, right? The energy that comes off the audience onto the band is unbelievable, unbelievable. I got a draft of that energy. Just being on the edge of that was incredible. It was thrilling, but it was also startling because that's a lot of energy coming at you. You have to be able to handle that.

You’re so far out of ordinary life and there’s something really pleasurable about that. You're everywhere and nowhere at the same time.

Anna comes from a creative family. Both of her parents are artists. What role does that play in the novel?

Her parents are both artists which my parents are not. Her father is a kind of major conceptual sculptor and her mother is basically a painter, I guess you could say. They have a profound effect on Anna because they have both been very deeply involved in one kind of artistic medium and Anna's is in another and she's trying to locate herself between these two very strong parents, particularly her father who, in the book, revolutionized sculpture. She really wants to know if she can do something as powerful in music as he did in sculpture and she wrestles with his legacy. She wrestles with the fact that he kind of gave up at a certain point, he lost heart, and with her parents, as in throughout the book, the question is, how do you go on? It's not the first time that is the hardest. It's very hard to get up the nerve for the first time, the first record, the first scultpure, the first book. That does take one kind of drive and inspiration, but its the sixth one where that question can get very, very hard to answer.

Why the fragmented structure in the novel?

If you ever had the experience of traveling somewhere, being out of your normal circumstances provokes a lot of memories and feelings that you maybe wouldn’t necessarily be feeling back at home. You’re sitting on a train going somewhere looking at the scenery and you’re flooded with these various thoughts. Your mind has to go somewhere and it goes a lot of places. I really wanted to capture that feeling and that energy, and I think the fragments helped convey that.

The novel has a somewhat vague ending. What were you hoping to accomplish with that?

I hoped it would leave the reader with an open-ended, kind of optimistic feeling. I think its safe to say that the book doesn’t end with Anna winning the lottery, meeting the person she’s going to marry and living happily ever after. It’s not a wish fulfillment, but she gets what she came for.

Why did you feel it was important to write a rock 'n' roll novel with a female protagonist?

You know I always knew that my protagonist was going to be this woman, so I didn’t choose it in the kind of conscious way, but obviously making a female character who has a lot of freedom, agency, and responsibility for her own life is something that I really like doing.

We can sit here right now and write down 20 women who are major forces in indie rock music without even having to think that hard.

Also, when I finished the book, you always get asked, “What other books is your book like?” so I went online and I searched ‘books with female rock star protagonists.’ There were barely a handful! In literary fiction there is a list as long as your arm featuring males. Women, not so much. Then I got really interested because in the real world, in the wild, there are lots of female rock stars … We can sit here right now and write down 20 women who are major forces in indie rock music without even having to think that hard so that was fascinating to me … I thought, Why has no one does this? When these incredible stories are happening all around us and they are so compelling and so rich and so complicated? They make for great material … so I feel honestly like I stumbled into a treasure house.

How do you identify with Anna's character and how did you anticipate your reader would identify with her? ` I identified very much with her passion for her vocation and her sense that she might be going all in for something that really would not work out. As a writer, that's my life. Welcome to my world. For a peformer like Anna she can rise or fall in one performance, in two hours, and I can't even imagine how terrifying that would be. For a novelist it's on a different scale, but it's also equally terrifying. You could work for a decade on a novel and it just goes dead. Nothing happens. So I definitely identify with that feeling of not knowing if you can do it or not and just going ahead anyway, taking that leap.I hoped my readers would identify with would be that too, and also with the feeling — because we all of those feelings in life, whether you're a rock musician or a writer or a doctor or a mom — of those moments when you think, What am I doing? Did I choose the right career path? Was this the right road? Is it too late? What did I want, what did i get into this for? We even feel that way sometimes in relationships, right? I feel like that is such a tender place for everyone.

I believe that many people, in their hearts, are rock stars.

Also, honestly, I have to say I believe that many people, in their hearts, are rock stars. It's just that no one knows it yet. Everyone singing in their car on the highway, everyone killing it on karaoke night. There are those moments when everybody feels like, I've got the magic, so I hoped they would identify with that.

What is your go-to karaoke song?

Oh, I can totally answer that. I have no shame around this question: "Sister Christian," which I did perform in karaoke as recently as January at a booksellers' convention. Night Ranger, "Sister Christian." I would do that in a heartbeat.