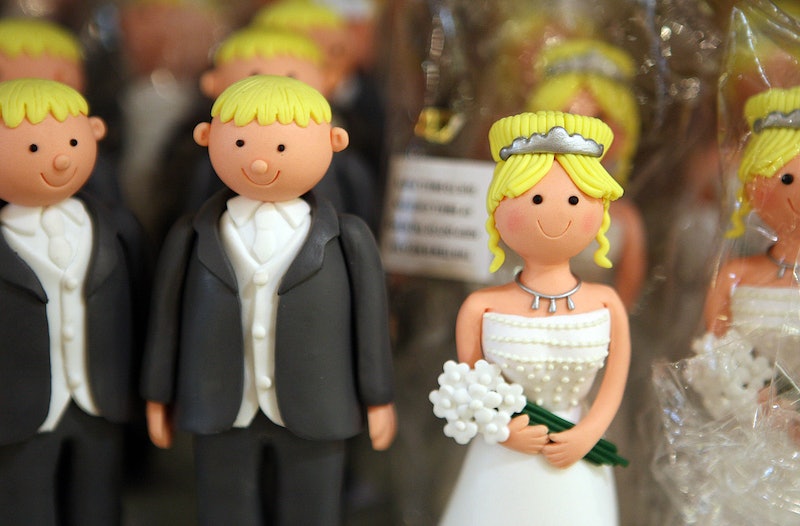 Mention the idea of marriage advice from your mother, and people immediately have a rose-tinted vision straight from a Norman Rockwell picture. The mother, tenderly buttoning a gown or lacing a bridal shoe, bestows her years of marital wisdom on the winsome, eager bride. There might be a hand-me-down ring involved, and there is definitely some picturesque tear-shedding.

But given that my mother is an AC/DC-loving hellion who swears like a Navy SEAL, this scenario was always a tad unlikely.

Anecdotes tend to follow my mother around: the time she nearly managed to cut her lip off with a ski. The time she fell off a floating Chinese restaurant onto an anchor. The time she had to be smuggled out of a country at night to avoid a fatwa. The time she commanded an office of 100 male stockbrokers, and once jumped out of a window to escape an axe murderer. (All true.)

But there is one thing that is traditional about my mother: She's been married since the dawn of time, or rather, since she was 20. She won a local newspaper’s Most Beautiful Bride contest despite (or perhaps because of) her dress; a polyester high-necked leg-of-mutton-sleeved monstrosity. We still have the newspaper clippings, my dad beaming under a halo of hair the size of a watermelon, my mother looking round-cheeked and highly flammable.

So when she decided, three weeks before my wedding, to dole out wedding advice over a crackling phone line from Australia, I got out a pen. I could preserve her thoughts on marriage and the secrets to a long, happy relationship! My grandchildren could hear this venerable wisdom! I could pass it down through the generations!

This, verbatim, is the list that I ended up with, and what I tried to glean from it.

“You will want to leave each other. But hopefully not at the same time.”

My parents have at least one bicker every day — 20 minutes, regularly, like exercise. Their arguments are always about the silliest subjects imaginable. They have fought about who read a psychology book first, whether it’s going to rain, and how to get a dead possum out of the pool. I once witnessed a blowout over the phrase "as the crow flies."

This appears to be the secret to a 40-year marriage — try to agree on all the deep issues, and have half-hour arguments about oyster forks.

Lesson: Constant marital harmony is a myth. If people say they are happy with each other all the time, they are either lying or on Valium.

“I took my wedding ring off to get clients to sign contracts. Don't do that."

This was followed by: "Then I made them millions and they didn’t care that I was married. [Pause.] Don’t do that, either.”

Having spent most of my life in both awe and mortal fear of her, the notion of my mother flirting with anybody seems odd. It’s like picturing a wolverine wearing a bonnet.

Many of her stories about surviving the corporate culture in the '80s run along the same lines: She ruthlessly used her own femininity to get ahead in a deeply misogynistic world, but would rather I don’t, because these days, I shouldn’t have to.

These stories are always told with a mixture of deep pride at manipulating the system so successfully, and self-conscious horror that she ever had to distort herself — her marriage, her body, her availability — to get ahead.

Lesson: Don’t pretend to be single.

“If you’re going to leave your husband, try to do it for a woman. Apparently that makes it easier.”

This is a perfectly legitimate piece of life experience. A brace of wives in my mother’s circle divorced their husbands at 55, moved to remote Australian beach communities with ceramic artists called Sherry-Lynn, and now wear linen tunics while talking about holistic wellness. Everybody seems happy.

Lesson: People can change in many ways as they age, and the marriages that fail are the ones that can’t navigate those changes. And sometimes, that’s really OK.

“Don’t have babies till you’ve had success. Babies are not success."

"They are horrible shit-screaming monsters." This, from a woman who spent years trying to conceive, and finally had to have her two babies surgically excised because her hips are the size of an espresso cup. Babies, to my mother, were miracles. But that didn’t mean that she had to like us.

“Give me something that can have a conversation,” is what she says on the topic of small children. “Or a dog.”

I was raised to believe that babies didn’t have to be the Prime Goal, or indeed a goal at all, and certainly not until you’d explored all the avenues of life without a child. When I told her in a restaurant in Paris that I was thinking of getting married at 25, she yelled “NO BABIES TILL AFTER 30” and hit me on the head with a paper menu.

This is a point of view that was still shocking in the late '80s, when my brother and I were born, and it hasn’t lost its political resonance now.

Lesson: You are not only a bride, a mother, or a daughter. Also, babies are very poor conversationalists.

Should I ever hand my mother's advice down to my children, I expect a fair amount will be lost in translation. But the overall messages of my mother’s marriage advice — be kind, be trusting, define yourself, work with change — will probably endure, even after the anecdotes are gone. And for that, I'm grateful.