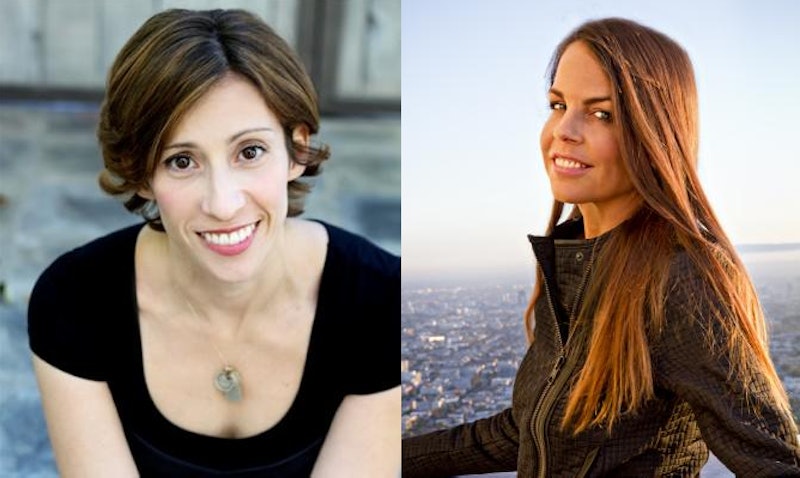 Kami Garcia and Margaret Stohl are two very busy women. Their first novel together, the YA book Beautiful Creatures, was a massive hit, spawning three sequels in the series, a movie adaptation, and now, a spinoff series in the same universe. But neither Kami nor Margaret rested on their laurels. Between time writing and revising their novels together, both have individually found success in young adult publishing with Kami's Unbreakable to-be series and Margaret's to-be Icons series.

Beautiful Creatures is a four-part series focusing on highschoolers Ethan and Lena, a Caster, and it created a fully formed and epic universe of characters and mythology behind it. Dangerous Creatures takes fan favorite character Ridley Duchannes, a Dark Caster, a Siren, and pits her relationship with Link front and center.

Bustle talked with Kami and Margaret about the world of Dangerous Creatures, their partnership, and whether a "bad girl" can carry a series as the heroine.

BUSTLE: So you have a new book, the beginning of a new series, Dangerous Creatures. When did you decide that your next project together would be a spin-off and why?

MARGARET STOHL: We spent a lot of time touring together for the Beautiful Creatures movie. It was my birthday in France, I was in Paris with Kami, and we just kept talking about what we thought was going on back in our world of Gatlin, and it was like, we couldn't let it drop. We just had all of these thoughts on how the story had continued. And finally we just said, "Oh my gosh, we just have to write this out, we're never going to get it out of our systems. ... We missed everybody and we missed writing together.

KAMI GARCIA: Yeah, we really realized, we needed to write by ourselves to prove to ourselves that we could do it, but we also realized when we were writing alone how much easier it is to write with a writing partner, and how much more fun it is. And we misesd that. As much as we like writing on our own, we also like writing together.

You both have been working together for several years now, professionally. How has your partnership and collaborative style evolved since book one of the Caster Chronicles, which you weren't even writing for publication?

Kami: The original method that we used was passing chapters back and forth and editing over each other's work. And that didn't change at all through the Beautiful Creatures novels. But with these, because we were also doing our individual projects — which is a scheduling nightmare — we kind of went at it from a different perspective where we would outline together and then one of us would take the lead. Margy took the lead on Dangerous Creatures, writing a draft, then she would give it to me and I was kind of her editor. And again, our real editors would get in too, but essentially I was her first editor. And then for the second book, which we are about to revise, I did the same thing for her...

Most writers are riddled with self-doubt, so when you have someone telling you that what you're doing is great, it's a lot easier to keep going.

It really kind of worked out the same way in the end, because we talk a lot also on the phone, when we're collaborating, so we get constant feedback, which is the thing that's fun about writing with a partner. You always have someone to tell you if your stuff is funny or if you're on the right track. Most writers are riddled with self-doubt, so when you have someone telling you that what you're doing is great, it's a lot easier to keep going and fight the internal editor.

Ridley, the Siren cousin of Lena, is front and center in the new series. How did you choose her as your protagonist, as she's such a contrast to Lena and Ethan?

Margaret: We wanted to do something different. We knew that Lena and Ethan's story had four books, and we wanted to expand the universe and take our readers in another direction. There was no question, it was always going to be Ridley. [Ridley and Link] were our fan favorites from the very beginning. They have the same sort of following as Lena and Ethan do, and we already had fun doing the short story with Link by himself, so we knew there was a lot to mine in that still. And it was a big challenge; taking Ridley from being a sidekick and a dark character into the main focus of the book and really exploring what makes her tick. Is everyone really truly a "bad girl?" And can anyone be the hero of their own story? It was a really challenge as writers, but it was just so, so compelling and we loved doing it.

There was no question, it was always going to be Ridley.

You read a lot about having 'unlikable' female characters in YA, and it's interesting to see your thoughts on taking someone who was considered the "bad girl" and making her the protagonist.

Kami: Ridley was always sort of the bad girl, but at the same time, I don't think she was unlikable. I think when she first came, she was. But as the series evolved and we found out that she was the bad girl with a heart of gold — she really did love her cousin and her family; she really couldn't resist being there for them when the chips were down — I think she just became a different kind of hero. And Margie and I like to say, 'Everybody can be a hero in their own story.' ... A lot of the time we might feel like we're a bad girl or a bad guy, and we make mistakes and we stumble, but you can get back up.

Margaret: What makes a character unlikable isn't really if a character does bad things. It's really interesting; I've thought a lot about this. Because we have to put together a voice for Ridley.

And Margie and I like to say, "Everybody can be a hero in their own story." ... A lot of the time we might feel like we're a bad girl or a bad guy, and we make mistakes and we stumble, but you can get back up.

Sometimes, what makes a character likable is that you can relate to them. I find a lot of times the characters I connect with the least, or like the least, are characters who don't show any flaws and don't seem real to me, and I can't make that kind of connection to them. Being inside Ridley's head and seeing how exposed and vulnerable she is, I just really started to love her. And not that she was doing anything particularly loveable, but I understood her.

I find a lot of times the characters I connect with the least, or like the least, are characters who don't show any flaws and don't seem real to me, and I can't make that kind of connection to them.

Part of what really drives your Caster Chronicles series is its setting. What made you uproot the characters of Link and Ridley to New York City, such a contrast, for Dangerous Creatures? And how did that change your writing.

Kami: We didn't want to create a spin-off that just sort of churned back through Beautiful Creatures territory. We've always talked about the fact that in the book Link's big dream is to graduate high school and get out of Gatlin and go to New York City and make it big as a rockstar. I think it's fun on many levels because, obviously, it's such a fantastic setting and a fantastic place, and like the South, the city feels like a character. There are so many interesting aspects, but also it's weird to see Link, this small-town Southern boy, how he deals with and reacts to being in a place that has all these things and is much more progressive than where he's from.

Another big driver of the series is its rich, generations-spanning mythology and backstory. Working as co-writers, how did the two of you hammer out these details and keep track?

Margaret: They're like our family; they're real people to us. We see those characters a lot more than we see some of our family. We've always said about Beautiful Creatures, the weirder the characters, the more likely it is they're one of our actual relatives. The normal-seeming people we made up, but my grandfather is the one who read everyone's mail and Kami's great aunts, who are the sisters. It's all real. We know that world really well.

Taking them into New York gave us the chance to do the fish-out-of-water thing and do something different with them. But I know that world really well too. I have a daughter living in Harlem to go to Columbia...

Can you let us in on what's coming next for you two, both individually and in the series?

Margaret: My series, Icons, is sci-fi and it takes place in Southeast Asia, in a jungle in Northern Thailand. Kami's book is also much more Buffy the Vampire Slayer or The DaVinci Code; it's really, really a different world than Beautiful Creatures. We've been interested in takings fans into these other sides of our personalities, and that's been a fun ride too. We'll go from being so deeply immersed in the revisions for the second Dangerous Creatures book and then we'll go right into our sci-fi, paranormal thriller world, then we'll get to go back into Gatlin. And that's the balance that has worked out perfectly for us. Full of everything we love.

So you two know how to keep busy!

Kami: That's for sure!

Margaret: The Dangerous Creatures books for us are like family reunions. It's so fun to check in with our readers who are so loyal and have been there now for six years. It's been like a homecoming.