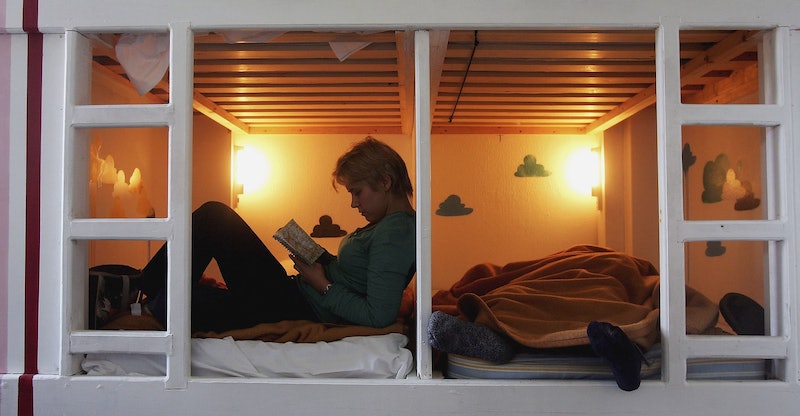 When you’re in your early twenties, having a roommate can be the difference between making it and having to admit defeat and move back in with your parents. Splitting the bills and having someone to share a bottle of wine with may sound nice, but choosing a roommate is a much bigger decision than just finding someone who you like to hang out with on your nights off.

Whether you’re signing your first post-college lease, or you’ve chosen to live off campus for the first time, living with a roommate outside the structures of dorm life comes with its share of challenges. Luckily, most common roommate spats can easily be solved with a little basic courtesy. Before you even make the leap and choose to live with another person, I've come up with a list of seven essential rules (based on my own past experiences with roommates) that, if followed, are guaranteed to make both of your lives so much easier.

1. Pay your bills on time

This is the essential rule for roommates, and it should never be broken. No one should have to pay for your mistakes, like buying that Kate Spade bag knowing damn well that the rent is due. Knowing that your roommate is going to be able to pull her weight is the most important part of building a good relationship, especially if money is tight. There may be times when you need to rely on each other, like when emergency car problems or unexpected illnesses pop up, but that should be the exception rather than the rule. If you're really proactive, you'll stash away a slush fund of emergency cash. (Note: my roommate and I can only aspire to be this responsible.)

2. You don’t have to be best friends

It isn’t necessary for you and your new roommate to spend every waking moment together, and it probably isn’t healthy, either. Spending too much time with the person you live with can lead to burnout, which inevitably leads to fights, so make sure that you’re giving each other enough space away from one another even when you're both at home. You can still enjoy TV marathons and bottles of wine with your roommate without being completely co-dependent. Trust me on this one — my roommate and I have been friends for more than 10 years, and I can attribute a lot of that success to the fact that both of us know when to back off a bit and give each other room to breath.

3. Know what you’re getting into

When my roommate and I got an apartment together, it was because we both just happened to be broke and in need of a place to live at the same time. Our lives and schedules were very different, which sometimes caused tension. Many days, I would wake up for work and hear her winding down from the night before.

Now that we’re in our fifth lease together, we’ve worked out a rhythm that makes sense for us. It’s never a good idea to move in with someone who is in a much different place in their life, as it will inevitably lead to serious problems. You don't have to be carbon copies, but make sure you're both on the same page. If you're stumbling in from the club with a group of friends at three in the morning, you probably shouldn’t get an apartment with your friend who winds down with Downton Abbey and a cup of tea before going to bed at 10 p.m.

It is difficult to make a roommate relationship work if you don’t get together to make big decisions. If you want to get a pet, it’s probably not a good idea to go pick up that puppy without telling your roommate first. Shared spaces mean shared responsibility, and that includes letting your roommate know if you’re planning to do something that will ultimately impact them as well. I’m not saying you have to hold a family meeting every time you want to buy a new rug, but it’s easy to shoot a quick text to your roommate to let them know what is going on.

Unless you have arranged otherwise, don’t eat their food or drink their booze. No one likes to wake up and find an empty carton of milk in the fridge, especially if that milk was intended for a recipe, or worse, your coffee. If you do end up eating the rest of your roommate’s fancy cheese, you’re obligated to replace what you’ve taken within the next day or so. And don’t just leave cash, because you’re practically telling your roommate to go buy some more of the stuff you just ate, and that’s rude.

Living with someone quickly exposes you to who they really are, and it’s not your job as a roommate to be judgmental. You may not approve of your roommate’s new boyfriend or how late she stayed out last night, but it's also none of your business. Holding imaginary grudges about things that aren’t even your problem will make the roommate relationship deteriorate quickly, and it's likely that there are things about you that drive your roommate crazy too, so it's important to keep that in perspective. My roommate hates that I leave my shoes all over the apartment, and I can't stand her music sometimes, but we've figured out a way to make it work.

In my experience, I've found that a little basic courtesy is really all that’s needed to make sure that you and your roommate are getting along. If your roommate has to wake up early, don’t play loud music and attempt home improvement projects at 11 o'clock at night. Conversely, it's also important to remember that everyone makes mistakes, and it is entirely possible to be a complete dick without knowing it. Being considerate is essential, but don’t forget to cut your roommate a little slack every now and then. Especially when they're hungover and grouchy.

Having a roommate is a great way to save a little cash and hang out more regularly with someone you enjoy, but there will be arguments and fights no matter how great your relationship. Following these seven rules, though, can help ensure that you don’t end up killing each other before the ink on the lease has even dried.

More like this
5 Signs You Have A Toxic Relationship With Yourself
By Lexi Inks
These 3 Signs Are The Master Chefs Of The Zodiac
By Kristine Fellizar
These 4 Zodiac Signs Make The Best Bridesmaids
By Nina Kahn
The Zodiac Sign Pairs Most Likely To Have A Sibling Rivalry
By Kristine Fellizar
Get Even More From Bustle — Sign Up For The Newsletter
From hair trends to relationship advice, our daily newsletter has everything you need to sound like a person who’s on TikTok, even if you aren’t.