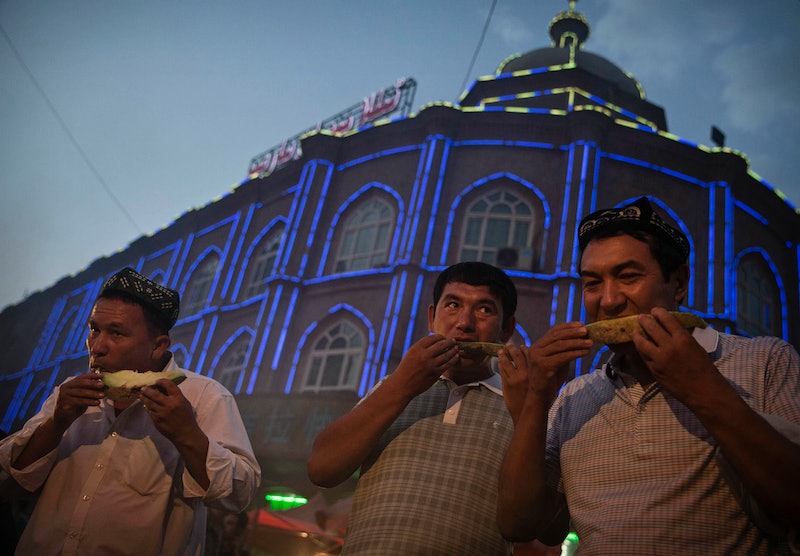 Over my decade-plus on the dating scene, I carried a terrible secret. Or, at least, it felt like a terrible secret. No, I didn’t have an arcane STD, an esoteric fetish, or nipples that looked like a silhouette drawing of Abraham Lincoln. And yet, I felt just as confused and ashamed as if any of those things had been true. For, you see, I do not enjoy receiving oral sex.

Back when your parents were young (sorry), oral sex was typically considered downright kinky, and doing it carried a lot of emotional baggage and moral hang-ups. Based on my own sexual experiences as a straight woman, that way of thinking seems to have gone the way of the flip-phone — over the past decade, I've met nothing but guys who performed oral sex with great gusto (if not always with great skill).

Now, I’m hardly arguing that people performing oral sex freely and comfortably is a problem; and in fact, a 2012 study showed that college women who wanted to receive oral sex during hook-ups by and large still had to go out of their way to ask for it, so it hardly comes standard in all situations nowadays. But in a lot of communities, performing oral sex on women has come to represent all the qualities that make one a caring sexual partner/relationship material: a sense of selflessness, a commitment to someone else’s pleasure, an ability to subvert one’s own desires in the moment as part of a larger goal.

The opinions on what, exactly, is wrong with you vary: You’re either too uptight about sex and embarrassed about your body to enjoy it properly; you’re frigid (as recently as 2000, you could write an article about cunnilingus for a major website that put down women who were reluctant to engage in it as outdated prudes); or, most popularly, “no one’s done it right to you yet.” Worst of all, some partners have assumed that I’m covertly critiquing their oral sex style, and when I say that I don’t like oral sex, what I mean is that I don’t like receiving oral sex from them.

I have been sexually active for a good chunk of time now, and I can tell you, if I have not yet run into a man who can perform oral sex properly yet, it must be about 5 percent more difficult than splitting the atom.

A more likely answer is that it simply doesn’t do anything for me. While there can be hang-ups about bodies or sex in play here, some of us just don’t respond physically to the subtle physical pressure provided by oral sex. I have my suspicions as to why it doesn’t quite work for me — I spent my entire adolescence masturbating so forcefully, anything short of an industrial-strength back massager doesn’t really do it for me anymore — but the real question isn’t why one doesn’t enjoy it. It’s actually, why is enjoying this so important? And how do you explain to a partner that their attentions would be better spent elsewhere if they’re, uh, looking for results?

So if you, like me, have given it a fair shot, and just don’t see what the fuss is about, read on. Here are the answers to five questions you may be asking yourself with regards to your oral sex preferences.

1. IS THERE SOMETHING WRONG WITH ME?

If you do a search on “women who don’t like receiving oral sex,” one of the first things that comes up is a Reddit thread called “I don't like receiving oral sex. Is there something wrong with me?”. This is as sad as it is ironic, to see a sexual act that was supposed to symbolize women’s sexual liberation now turned into one more sexual standard we can feel that we don’t measure up to.

So, if you’re wondering this right now: No, there is nothing wrong with you. If you feel like you might not be able to fully enjoy receiving oral sex due to some lingering moral or body hang-ups, then by all means, please investigate and come back later. But if you’ve genuinely given it the old college try, and found that you’d simply like to spend your time in bed doing something else, then no, there is nothing wrong with you.

2. WHAT'S THE BEST WAY TO EXPLAIN THAT YOU'RE JUST NOT INTO IT?

It’s that hard to override the aforementioned cultural conditioning that says that receiving oral sex is the ultimate in female sexual pleasure. I’ve found that the only solution is repetition. This can be a hot-button ego issue for some people, so try to phrase it in terms of “This is how it always has been for me,” not “I didn’t like it when you went down on me just now.” It also helps to bring it up outside of bed, where it won't be as emotionally loaded — try bringing it up if you’re having a conversation with your clothes on about kinks or other sexual matters.

3. WHAT'S THE BEST WAY TO END AN ORAL SEX SESSION WITHOUT HURT FEELINGS?

I can tell you from personal experience that there’s almost no good verbal way to end an oral sex session (the last thing anyone wants to hear when they’re face-deep in your genitals is, “OK, that’s quite enough”); I’ve found that the best method is to immediately replace the oral sex with a different sexual act. Pull your partner up from your vulva and start doing something you really enjoy, like having them manually stimulate your clit. Generally, the sight of a partner really enjoying themselves will banish any weird feelings someone might have about getting called back to base mid-dive.

4. WHAT'S THE BEST WAY TO SHOW MY PARTNER THAT I STILL TOTALLY VALUE THEM, EVEN IF I DIDN'T LIKE THEIR ORAL OFFERINGS?

5. COULD I HAVE ACTUALLY "JUST NOT HAD IT DONE RIGHT" YET?

If you’re pretty early in your sexual career, and mostly hooking up with folks who have the same experience level as you, then that’s totally possible; leave it on the backburner to revisit when you have a few more notches in your belt. However, if you have been with multiple partners with varied styles and experience levels, and still think it just kind of feels like a B- backrub, then it’s probably just not for you. Which can still get to you. Even I, someone who feels strongly enough about this issue to write an article about it, have a voice in the back of my head that tells me that maybe I just haven’t had the “right” oral sex yet. But that feeling is rooted in the shame that society puts on women — that there’s something wrong with you if you don’t have sex the way you’re told that women are supposed to have sex.

More like this
The 19 Best Tweets & Memes About Bisexual Awareness Week
By Lexi Inks
These 4 Signs Are The Seductive Sirens Of The Zodiac
By Brittany Beringer
Are Quality Time & Gift-Receiving Love Languages Compatible?
By Lexi Inks
10 Creative Sexting Ideas That Don't Involve Nudes
By Lexi Inks
Get Even More From Bustle — Sign Up For The Newsletter