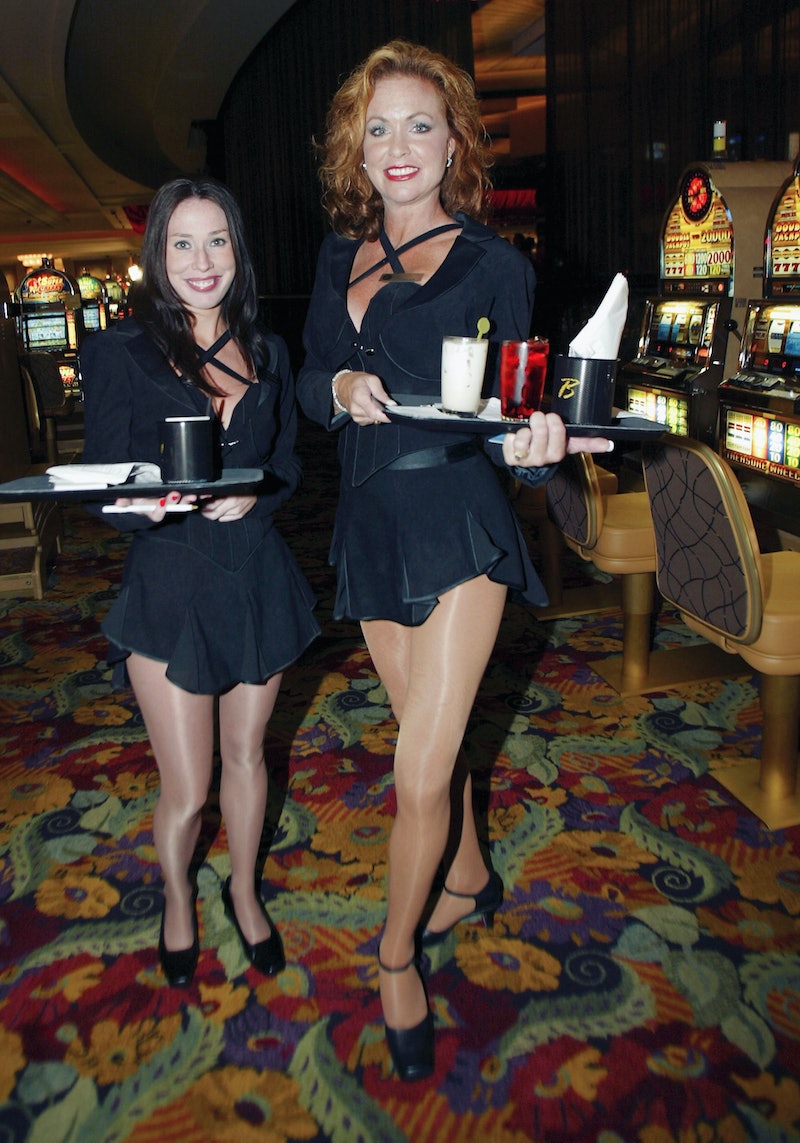 Think you can't get fired for gaining 10 pounds? Think again. Last week, an Atlantic County Superior Court judge in New Jersey ruled against the Borgata Babes, judging that casino bosses were entitled to expect their waitresses to look a certain way. People are claiming that this officially makes casino waitresses "sex objects," meant to be looked at by the clientele.

22 waitresses (dubbed the Borgata Babes) from the Borgata Hotel Casino & Spa filed suit against their employers for alleged weight discrimination. The casino's policy specified that these cocktail waitresses could not gain more than 7 percent of their original body weight, and allegedly told them to take laxatives before the mandatory weigh-ins.

Just to be clear, these Babes knew fully well what they were getting themselves into. “The Borgata Babe program has a sufficient level of trapping and adornments to render its participants akin to ‘sex objects’ to the Borgata’s patrons," Johnson wrote. "Nevertheless, for the individual labeled a babe to become a sex object requires that person’s participation.”

“The court noted that our personal appearance standards are fully and openly disclosed to all team members, and that every plaintiff voluntarily accepted them before starting work,” said Joe Lupo, Borgata’s senior vice president of operations. So the Borgata Babes were hired at least in part for the way they looked.

It's a tricky line to draw. Firing someone for gaining weight when they can still do their job as per their agreement upon hiring is one thing. Firing a casino waitress, whose job is arguably part serving and part physically representing the casino brand, for breaking her contract is another. No one would blink if a working model were fired for gaining weight, even if she could still perfectly pose.

It's unclear whether the issue people have with this case is whether or not the waitresses are meant to be looked at or whether or not we tend to see heavier women as less beautiful. It's a sad fact, but looking good is part of what these employers require. It's to be expected — if you don't like to be ogled, don't work in a casino, where everything is meant to be flashy and attractive. If these women found the weight restriction so appalling, why did they take the job in the first place?

I'm not arguing with the overall need to have more policies preventing weight-discrimination. Firing a teacher or an office clerk for putting on weight is a totally different ballgame: They're not part of a Atlantic City beauty show. But having modestly dressed casino waitresses of all sizes is going to take much more than a lawsuit, it'll take a major shift in casino culture and a change in what the clientele expects.