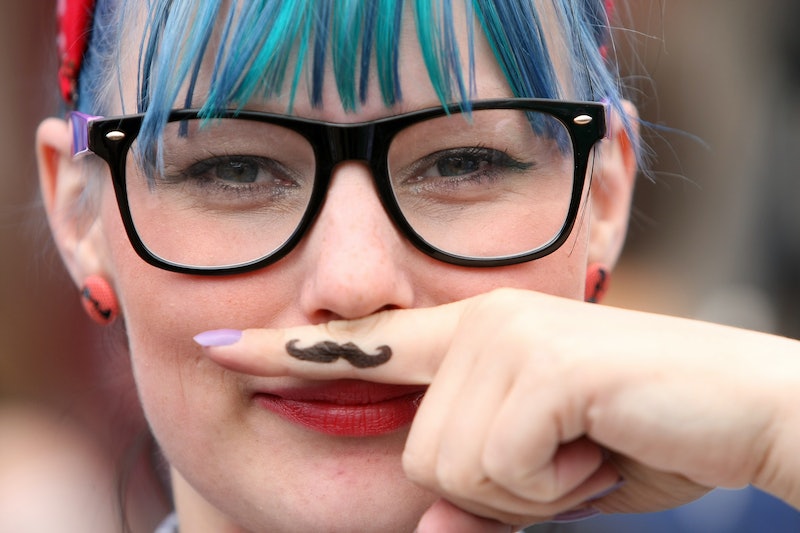 In an effort to gain converts, the dwindling German neo-Nazi movement has been trying to appeal to young people. They're putting out viral videos, appropriating hipster fashion, and even staging hip hop concerts (yes, you read that right), reports a recent Rolling Stone profile. By increasingly trying to absorb themselves into German youth culture, the misguided bigots want to skinny-jeans-and-Converse their way into the hearts and minds of the country's impressionable 13-year-olds, all the while concealing their message of anti-immigrant hate — or at least making it less obvious. Go look at the #nipster tag on Instagram and prepare to be horrified.

In addition to dressing like Williamsburg hipsters from a decade ago, they're starting their own clothing labels, emblazoning shirts with logos like "88" (see above), which replaces "Heil Hitler" — because "H" is the eighth letter in the alphabet. Gone is the once-ubiquitous skinhead of the 1990s, with his shaved head, combat boots, and bomber jacket — the article compares one of the late-20s Nazis they interviewed, wearing a gingham shirt, to a character on Silicon Valley. There's a new, "relaxed" approach that portrays itself as inclusive — except for the fact that it excludes almost everybody in the whole entire world.

Activists and academics who are trying to prevent kids from being swallowed up by the movement are understandably pissed off: You can't tell what a neo-Nazi looks like anymore, which makes it easier for them to commit violent acts. Cynthia Miller-Idriss, a professor at American University who researches schoolchildren in Berlin who are at-risk for joining the far-right party, tells Rolling Stone that it's now harder than ever to identify a neo-Nazi. "If you were a teacher," she says, "you used to be able to identify a skinhead in your class and you could think of ways to intervene. But now it's harder to mainstream society to understand who these young people are and to engage with them."

Trends and subcultures spread across borders all the time, and it makes sense to use signifiers your audience is familiar with when trying to introduce them to something new. But in this case, a bunch of asshats are using music and fashion to lure aimless kids into a dangerous doctrine.

More like this
42 Black Owned Fashion & Beauty Brands To Support Today & Always
By Mekita Rivas, Shea Simmons, Kui Mwai and Dominique Norman
8 Charities To Donate To During Black History Month
By Alexis Morillo
These Artists Are Reimagining Black History Month To Create A Better Future
By Katie Mitchell
Gen Z Are Twice As Likely To Identify As Queer, According To New Data
By Sam Ramsden
Get Even More From Bustle — Sign Up For The Newsletter
From hair trends to relationship advice, our daily newsletter has everything you need to sound like a person who’s on TikTok, even if you aren’t.