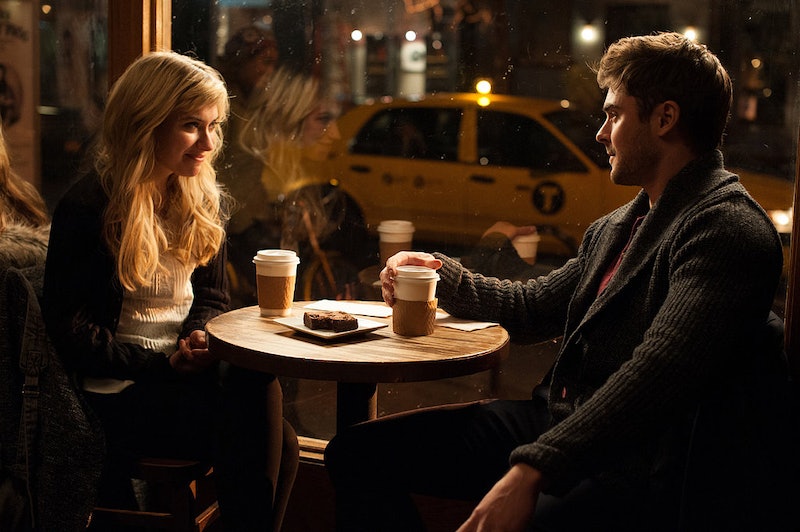 First dates are hard. I don't consider myself someone who needs alcohol to have a good time, but I do consider myself someone who needs alcohol to survive a first date. Of course alcohol should be involved when you throw yourself into a rendezvous with a random guy you've only chatted with on Tinder about bagels and your respective occupations. After a glass of wine or three, the talking gets easier, which is key, because all you really know about him is that he likes to “live, laugh, and love,” according to his profile. You lean closer. You take off your cardigan. Your legs touch. You go to a second location for a cocktail. Even if there's no chemistry, the alcohol will have made it less awkward and maybe even fun.

Yet I think I'm done with boozy first dates, despite these obvious advantages. Alcohol can facilitate physical, emotional, or intellectual connections with someone who, in a well-lit and sober scenario, you'd recognize as completely incompatible. You'll have a good time; maybe you'll hook up, maybe you'll see him again. But fast-forward a few weeks or months, and whatever weird thing you developed with this guy will likely fizzle out. Drunken bonds are not, in fact, for life. You grow to realize his obsession with Nascar is unacceptable. He grows to despise your nasally laugh. Had that first date been sober, well, you may have saved yourself some time and a substantial amount of mediocre sex.

So I decided to conduct a terrifying experiment. I went on two weeks of exclusively sober first dates. Here are seven things I learned.

1. There will be fewer second dates.

While a non-boozy, daytime first date of museum-hopping or brunch-eating would formerly have terrified me, these two weeks were crucial: I learned the importance of experiencing a person — and deciding if you mesh — when the sun is out and you're only drinking water. However, after two weeks, I discovered that sober first dates meant fewer second dates. Why? Because it becomes clearer, faster whether you're a fit with someone. Of these eight sober dates, I've made plans to see only one of the guys again. This one guy, though, is far more promising than most of the dudes I've gone on second dates with after a boozy first encounter.

2. You probably won't hook up right away; this is probably a good thing.

One of my sober dates, had there been alcohol, may have led to a one-off (or series of) unsatisfying hookups. The date, sans alcohol but with lots of delicious pizza, was a perfectly pleasant encounter. Pizza Guy and I had texted for a few days prior, about random things like the possible radioactivity of East River fish and the utility of philosophy degrees. We bonded over our profound love and respect for pizza, so he suggested we grab lunch. Pizza lunch — the dream.

We met at noon on a Friday. Aside from the first awkward second — hug? Cheek kiss? Hand shake? A little bit of everything? — we split a wonderful pizza at Patsy’s. I laughed at things Pizza Guy said; Pizza Guy laughed at things I said. After about an hour, we split the bill and headed our separate ways. I was correct when I suspected I’d never see him again.

The thing about dating is this: A prospective mate can have all the qualities you’re looking for — intelligence, humor, good hair, ambition — but lack a certain element (chemistry) that you can’t quite place. When you’re sober, you are far more equipped to sense this missing element. And at Patsy's, we both sensed it. When you’re four glasses of sangria glasses deep, you sense other things: his lips, his arms, the fact that you haven’t had sex in months, etc. etc.

3. If you're looking for a casual hookup, sober first dates are NOT for you.

If you want a fun date that leads to a hookup, there is no question that alcohol should be involved, in my humble opinion.

4. Sober first dates save you lots of time and aggravation.

If you’re looking for something even slightly more serious than a random hookup, take the plunge and try a sober first date. Your “success” rate might drop — you’ll be able to determine much quicker whether you’re long-term compatible with someone — but consider all the time and aggravation this saves you. In an alternate scenario, if I’d met up with Pizza Guy at a bar on a Friday night, I’m sure we would have made out, and I probably would have seen him again, and again, until things gradually fizzled out and one of us found someone we wanted to be serious about.

Sometimes we forget all of the possible post-date outcomes. I know I'm guilty of frequently approaching dates with one outcome in mind — I want a boyfriend, or I want a hookup, or I want a good meal —when really, if you're open to a range of possibilities, you might be pleasantly surprised.

One of my sober dates was with a guy I'll call Pad Thai because he suggested we meet up for Thai food at this wonderful hole-in-the-wall spot in the East Village. Pad Thai was cute, supremely nice, and won all the points for choosing such an amazing restaurant. We had a lot in common: love of goofy-looking dogs, tacos, and Louis CK (in fact, the three most important categories of things). Yet I felt no sexual chemistry. None. But unlike after my date with Pizza Guy, I could envision a potential friendship future with Pad Thai when we parted ways. Once again, had I been tipsy or buzzed, I may have mistaken common interests (tacos! weird-looking dogs!) for sexual chemistry. Sobriety lent me the wisdom and insight to recognize that Pad Thai was not a romantic match, but very likely a friend.

6. Oh, yeah, they can be incredibly awkward.

This wouldn't be a fair-balanced piece if I didn't acknowledge that sober first dates can be HORRIBLY awkward. When I met up with a guy I'll call Small Latté at an adorable coffee shop, we didn't click almost instantly. He was a vocal libertarian; he was significantly shorter than me and seemed to have a complex about it; he ordered a small latté with almond syrup. I hate almond syrup! Almost immediately, I wish I'd brought a flask of whiskey or Bailey's to spike my coffee. Yet, I believe I am a stronger woman for having survived this date. Making conversation with people you'd rather not hear speak is an important life skill, and I was able to practice it.

7. If you’re ready to be “Drunk in Love,” ditch drunk first dates.