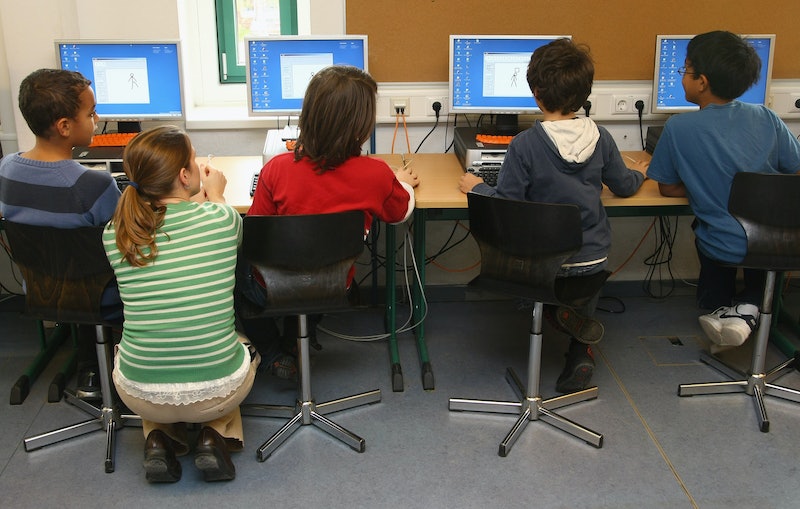 Social media is increasingly becoming the most dominant form of online communication, which has some people clutching their pearls over the dumbing-down of our society thanks to "text-speak" and a generation that has practically learned to read and type online. Unfortunately, the critics of Facebook and Twitter may be onto something — a new tool developed by TIME magazine shows that most of us are tweeting like a bunch of elementary schoolers.

After analyzing over a million tweets, TIME found that over a third of Twitter users are tweeting at a fourth-grade level. Using a test called the Simple Method of Gobbledygook, or SMOG, to analyze the complexity of words used in tweets, they found results that were less than inspiring. The SMOG test defines “complex” words as those with three syllables or more, and found that, on average, tweets from the analyzed users could be understood by the typical fourth-grader.

You can use TIME’s online tool to get a rough reading level of any public Twitter account. President Obama and Stephen Hawking’s tweets are in the seventh-grade range, while Neil DeGrasse Tyson is more of a sixth-grade level tweeter. The study only found a few accounts that were tweeting at a twelfth-grade level, but these findings really don’t indicate that most of us are a bunch of drooling idiots.

Our tweets may be at the fifth-grade level, but our own reading levels are not much higher. According to a Harvard University study, the average adult in the United States reads at an eighth or ninth-grade level. In 2012, a study found that President Obama’s past three State of the Union addresses were written at an eighth-grade level. Most of the media that we consume in the form of newspapers and online content is at a similar level, so it's really not much of a surprise that our Tweets aren't much more advanced.

The beauty of Twitter is that it allows people to communicate both quickly and simply, and that means staying away from too much jargon or long words. When you have only 140 characters per message, most users tend to stay away from making the message overly complicated.

Want to know the reading level of your tweets? Check out the tool here.

More like this
Ashamed Of Your Screen Time Stats? Here's How To Change That
By Alexis Morillo
11 Super Bowl Instagram Captions To Use On Game Day — Even If You Don’t Like Sports
By Alexis Morillo
25 Galentine's Day Games To Play On Zoom With Your Long-Distance Besties
By Mia Mercado
Everything You Need To Know About The Samsung Galaxy S23 Ultra’s New Camera
By Alexis Morillo
Get Even More From Bustle — Sign Up For The Newsletter
From hair trends to relationship advice, our daily newsletter has everything you need to sound like a person who’s on TikTok, even if you aren’t.