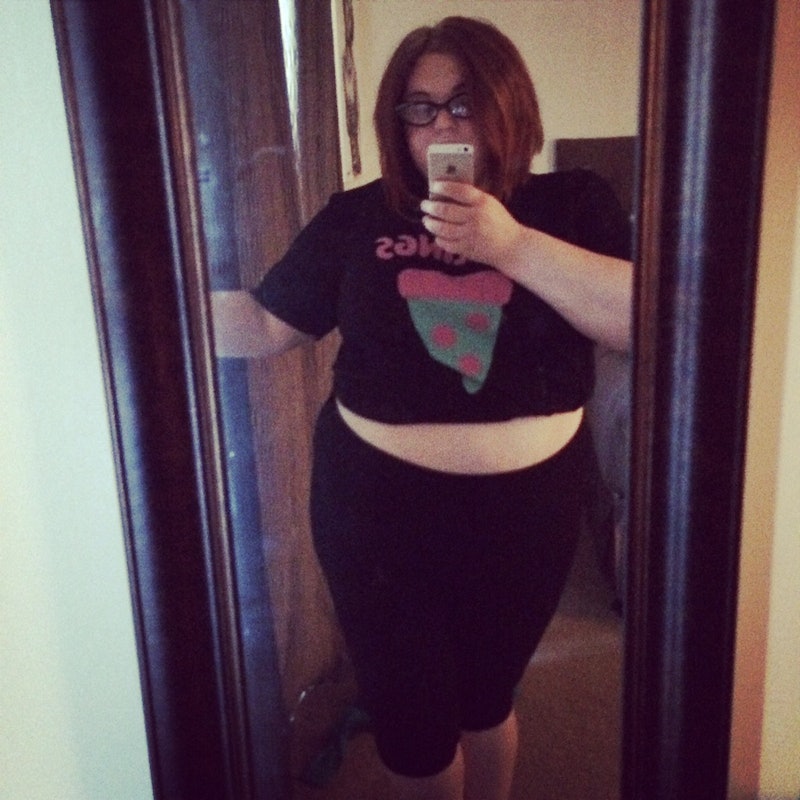 Being fat in a society that is increasingly hostile to the way your body looks means navigating a lot of bullshit in your day-to-day life. Fat people experience harassment from strangers on the street, are shamed by people who love them, and often have to deal with medical professionals who act as if they’re perilously hanging on to life by a thread. The person latest to advance the fat shaming cause? Self-described “fattist” and newly-minted-by-me Asshole of the Year Linda Kelsey, a writer who took to the Daily Mail to express her disgust after seeing a group of fat women hanging out at the airport.

“They were not chubby, but fat. They had bulging bellies and billowing pillows of back and shoulder stuffing, punctured by flabby arms and lardy legs that no amount of fake-tan could disguise,” she writes. “And what struck me even more forcefully about these lumpen individuals was how obviously unconcerned they were about it.”

As a “lumpen individual,” I’d like to extend a hearty “fuck you” to Linda Kelsey and anyone else who is offended by the mere existence of fat people — especially fat people who do not appear to hate themselves. The women that Kelsey has a problem with, a group of 20-somethings headed out on vacation, did nothing to deserve this kind of vitriol from someone who admittedly doesn’t like people based on the size of their bodies, and neither do the fat people who will take abuse from Linda Kelsey and people like her in the future.

Kelsey cites all the stats about health problems that are linked with obesity, and how much money this is costing England's National Health Service. But even if Kelsey's concerns with regards to fat people pertained solely to their health, someone who has exactly zero expertise in the medical field shouldn’t be judging the healthiness of total strangers. Being fat doesn’t mean that someone has diabetes or high cholesterol in the same way that being thin doesn’t mean having anorexia or bulimia. Even if a fat person is sick, there’s no proof that adipose tissue is solely to blame. More than that, no person, fat or thin, has any obligation to other people to be healthy, and they certainly don’t deserve discrimination if they aren’t.

Kelsey doubles-down on her indictment of fat people by calling them “greedy, ill-disciplined, and or ignorant,” which is not an uncommon belief. Most people tend to express these beliefs more subtly, but that doesn’t mean make them any less harmful. When society believes that fat people can simply eat a little less and walk a little more to “fix” their bodies, they begin to associate fatness with bad morals and poor character.

You may think that these kinds of hateful, inane rants are harmless words from someone who doesn’t matter, but fat people hear these criticisms from people every day. If there isn’t someone in the media telling us that our bodies must change, a stranger on the street or even a friend will take it upon themselves to remind us. It’s no wonder that so many of us are killing ourselves with unhealthy diets and potentially unsafe diet supplements. The pressure to be thin is constant and unrelenting, and the shaming if you’re not dropping the pounds comes just as often.

Still, plenty of people radically and unapologetically exist in fat bodies. They wear short shorts and crop tops, advocate for fat acceptance, and don’t give one solitary shit about what people who shame them think about their bodies. No matter what people like Linda Kelsey think, I’m going to continue loving my fat body and posting crop-top selfies. But there are still millions of women who will feel like this kind of hate was directed at them. These women will continue to hate their bodies, something Kelsey thinks they should do more of, but they probably won't lose any weight. In fact, they might get fatter.

It’s extremely refreshing, though, to hear that the young women that Kelsey writes about were enjoying themselves and being comfortable in clothes they love, like white leggings and short crochet shorts. It isn’t easy to find a silver lining in this kind of ugliness, but if young fat women are falling more in love with their bodies, then I’d say that’s a good thing, no matter what fat-shaming assholes have to say about it.