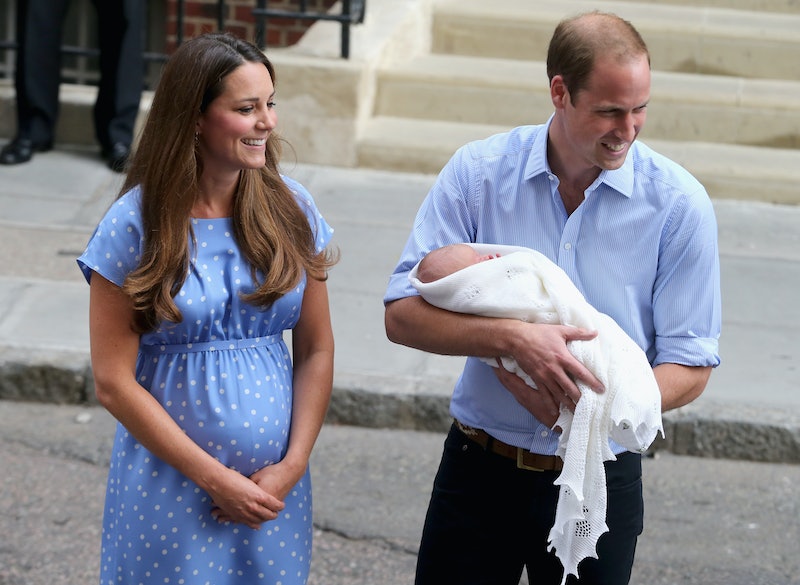 The U.K. website Fashionperks has conducted a survey about the most stylistically inspiring mothers, and no surprise here, Kate Middleton topped the list. After all, her baby blue Jenny Packham dress was basically the dress heard round the world, and another post-baby look — the Seraphine "Blossom" dress — sold out within three hours.

But these dresses are the only looks that Kate has been seen wearing post-pregnancy. Sure, she looked great each time — her hair was flowing like we've come to expect and her smile was luminous — but we've seen her in two blue dresses. That's it. Does that really make her one of the most fashionable moms ever?

What's even weirder is that Kim Kardashian earned a number five spot on the list, and she's been seen once since giving birth. That is, she's been partially seen: Her upper half appeared in a video message during her mom's new talk show. Kim's hair was straightened and her crisp white collar looked nice, but she could've been wearing muppet fur from the waist down for all we know. And since when does a white collar and a nice blowout make one a fashion icon?

The thing is, fashion can be pretty subjective, but it's also objective in many ways. There are definable trends that we can all follow. There are iconic outfits that pretty much everyone loves (Marilyn Monroe's white dress!), and trends that we all generally loathe. And naturally, the most noted fashion takes place in the world of celebrities — a highly visible canvas for a highly visual art form. What's Victoria Beckham wearing? Who wore what to the Met Ball? Best Oscar dresses! We could Google this stuff all day.

Don't get me wrong, I love the thrill of seeing the Olsen twins' latest diaphanous red carpet wear, and I'm always scrolling through "Best" and "Worst" lists after the Golden Globes. But celebrity alone is not enough to make someone fashionable, and I think this poll is a striking example of how people often conflate the two. Fame is not the same as style. Influence is not the same as creativity. Kate Middleton and Kim Kardashian have been the most famous pregnant ladies in the universe for about, let's see, nine months now, and they'll continue to be the most famous, most watched, and most imitated postpartum figures for a long time. However, we've witnessed exactly two and a half examples of "mom" style between them both. Let's not let our swooning love for the British princess (and for our American royalty, Ms. Kardashian) cloud our sharp sartorial judgment.