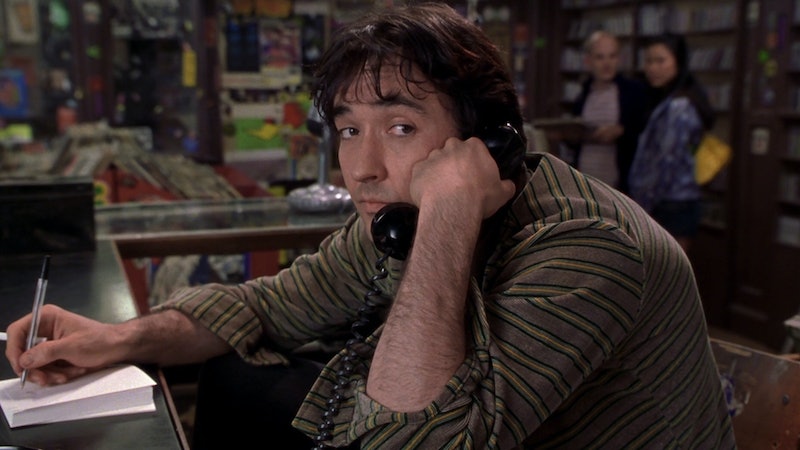 I was having a High Fidelity moment recently. Although I’m married and don’t really dwell on my past (except after a half bottle of wine, of course), I still sometimes catch myself wondering what might have been with past romantic interests. It’s not that I long for them in any way, but I just find it interesting to think about how things transpire in life and who ends up with who, and where we find ourselves, as opposed to where we thought we’d be.

Then, after having my High Fidelity moment, I watched High Fidelity for the first time in years. Again, I found myself smitten with the John Cusack’s character, Rob Gordon, because who doesn’t love a pretentious music snob in a Cosby sweater? But it also got me thinking about possibly feeding my curiosity about boyfriends past.

If you haven’t seen the movie, let me quickly recap: guy gets dumped, then decides to go back through the other big relationships in his life to see what went wrong. Did he mess up? Was it the other person? While I’d like to say that this character learns something and grows from it, his selfishness prevents any major change. What it does finally come down to is the realization that “great” may be overrated when it comes to dating.

“She didn't make me miserable, or anxious, or ill at ease. You know, it sounds boring, but it wasn't. It wasn't spectacular either. It was just good. But really good,” Rob says about his most recent break-up, and it’s something he hasn’t been able to say before. It took going down memory lane with the loves he had and lost to get to that place where you finally understand that what you have, that level of comfort and intimacy that can sometimes be labeled lackluster, is actually really awesome.

So, I decided to ask five men from my past their thoughts, in a couple sentences, on our demise. Was it me? Was it them? Or was the timing just off? As one who naturally overanalyzes everything, it was a project that suited me.

Here’s what they had to say.

EX NO. 1: DATED FOR TWO YEARS IN HIGH SCHOOL

“You were a bitch. You’re still a bitch.”

I thought I was on fairly civil terms with all my exes, but this response proved otherwise. He may be correct in his choice of adjective, but I don’t recall being a bitch back then. In fact, we parted as friends. I think it was the handful of interactions over the next couple years after high school that had made things go south. I wanted to prove I was over him, and I guess it came off as bitchy. Well then.

I can't say that I was deeply affected by his comment. Knowing what real love is, I know that I didn't love him, and although he was technically my first boyfriend, it was so long ago that I don't even recognize those two people. I decided not to push the topic of why he still refuses to accept my Facebook friend request.

EX No. 2: DATED FOR SIX MONTHS IN COLLEGE

“I should have never dated you, because the whole time I was waiting for [his now wife] to break up with her boyfriend so I could be with her.”

Yep, I was a placeholder in that case. I even remember asking him when he broke up with me if there was someone else. I mean, there had to have been, because it seemed so sudden. One day he’s having dinner at my parents’ house and two days later, he’s telling me we have to end things.

After he broke up with me, he immediately went to her house. I found that out because she, the other woman, lived with a friend of mine. So, I took it upon myself, after several shots of Grey Goose vodka, to call him and demand he tell me what it was that she had that I did not. “You don’t want to do that to yourself,” he said quietly. I think that hurt more than the break-up.

EX No. 3: DATED FOR A YEAR AND A HALF IN COLLEGE

“We were too young. I was too young. And you wanted more for me than I wanted for myself and it pissed me off.”

It’s true; I did want more for him. He was an artist, and as a fellow artist, I wanted him to put his art above all else, but he didn’t. Yes, we were both too young to take the relationship all the way to Marriage Town, but I wasn’t too young to see how much he was fucking up his future career with his drinking and drugs.

So, yes, I harped on him about it, and even now, I still do. I want to make sure he’s painting. I want proof that he’s creating. I don’t (and didn’t) mean to piss him off about it. I just wanted him to succeed, apparently more than he wanted to. It's tragic, because he had the talent to go all the way, but didn't.

“You didn’t have your life in order. I didn’t either, but you were out of control and I couldn’t handle it.”

He speaks the truth: I was out of control. My depression was at an all-time low; I was new to the city; I was broke, miserable, and what extra money I had, I spent on numbing my pain with alcohol. But, as I’ve learned, I should never drink when I’m sad, because I become insanely out of my mind, and I can’t control my actions, my emotions, and especially my tongue. The hate that I spewed at him in those moments was horrifying. I’m just happy I barely remember any of it, because of the drinking. Before the year was over, I’d end up in the psych ward at Beth Israel for a suicide attempt, which actually saved my life in the long run.

“The one thing that kept me away was that I had the fear I would have to live up your rich friends' and parents' expectations. I did love the wild madness of your mind and you were a hellcat in bed. You still are on my mind, Zelda.”

He calls me “Zelda” after Zelda Fitzgerald, in both an ode and a testament, to my flair for the dramatic. I may have cleaned up my act a bit by my early 30s by cutting back on the drinking, but the drama queen in me never ceases.

As for my “rich friends,” I’m not sure what he means, because he met most of my friends and they all adored him. However, I wasn’t about to get into an argument with him about it, and told him I’d buy him a beer for giving me the best response.

Similarly to Rob Gordon in High Fidelity, my research didn’t offer me any major insight, or even teach me something I didn’t already know. I’m no more grateful for my awesome husband than I was before I started sniffing around the past. If anything, it proved what I already knew: that things happen for a reason. I’m exactly where I’m supposed to be, and they’re where they’re supposed to be, and that’s not just good, but great.