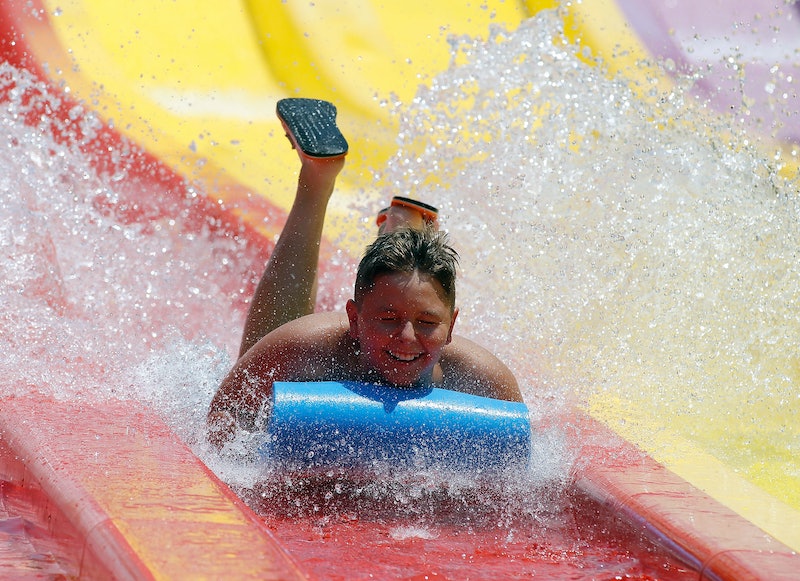 America is so hot right now. The roads in Yellowstone are melting. Average temperatures in some parts of the nation, climatologists say, could increase by as much as 12 degrees by 2100. The bleakest forecasters claim there’s probably nothing we can do. Even health experts have chimed in: Hot temperatures = increased risk for kidney stones! It’s a sultry, scary world out there. What’s a regular summer citizen like you to do? Well, you should go to a water park, obviously.

There are, of course, loads of crappy water parks out there. I recently drove by the one I used to go as a child (and have held dear in my memory ever since) only to discover that it’s really just two big slides next to the parking lot of a roller rink that look like they haven’t been inspected for safety in years. If you’re going to live out the last livable days on Earth amid tide pools and screaming kids, then the venue better be pretty supreme.

To help you find the best place to soak and scream, we’ve ranked the 10 best water parks in the country, factoring in size, amount of rides, general insanity of said rides, and bonus features. Throw on your swimsuit and dive in.

This water park in Indiana sports plenty of slides and two water coasters, but it’s really its Bahari Wave Pool — a veritable aqua plaza spread out over three-quarters of an acre that includes geysers and kiddie sections — that sets this water park apart. If that sounds tame, try Zoombabwe, the world’s largest enclosed water slide.

Usually, water slides simply don’t lend themselves to narrative experiments in the way that roller coasters do. One place making all the right exceptions to this rule is Water World in Denver, which features attractions with well-developed “storylines” and killer set decorations. One of these is Lost River of the Pharaohs, a raft ride whose spooky, ancient-burial-grounds feel calls to mind the Pyramids at Giza, or, for the TV geeks among us, the final season of Lost.

Water Country is located in the same irresistibly quaint city as Busch Gardens and, like that famously well-manicured theme park, balances its thrills with a beautiful setting. Among its 25 rides, Water Country, which is the largest water park in Virginia, includes Vanish Point, a 75-foot tall tower that drops you through a floor and sends you down one of two dual winding waterslides.

This German-themed water park in Kansas City makes the cut by virtue of having what is beyond a shadow of a doubt the freakiest water slide in America. Verruckt, which debuted this year, is the world’s tallest, fastest, and steepest water slide in the world. If superlatives don’t do it for you, hear out these stats — height: 168 feet; speed: around 65 mph; slope: 60 degrees. (Watch the surely non-justice-doing POV video here.) If plunging down a slide taller than Niagara Falls isn’t your thing, Schlitterbahn also features milder attractions, including a number of less reminiscent-of-death slides and Boogie Bahn, a wave pool that creates the experience of surfing.

Silver Dollar City’s White Water Park in Missouri goes for thrills. The park’s KaPau Plummet consists of two 245-foot slides that drop riders through a trapdoor before whisking them down a 70-degree-incline hill (we recommend the park website’s delightfully trippy video of the ride). Then, there’s the Racing Slides, a 300-plus-foot four-lane water slide that drops riders from a height of five stories at more than twenty miles per hour.

This Disney-owned water park features one of the most thrilling water rides in the country, Summit Plummet, which sends passengers down a 120-foot near-vertical chute at roughly 60 miles per hour. It also goes big in the chill-out department, with Teamboat Springs, the longest family raft ride in the world.

Water parks are usually considered a strictly summer-time destination, but that reasoning probably doesn’t go over well with Wisconsiners (or anyone north of the Mason-Dixon line, for that matter), who spend a considerable number of months out of the year mummified under layers of sweaters and scarves. Kalahari Water Park in Wisconsin Dells was the country’s first indoor water park when it opened in 1994 and, today, it’s the largest under a single roof, measuring 125,000 square feet. Packed into the space are more than a dozen rides and attractions, including Master Blaster, a 500-plus-foot uphill water coaster, and Mud Hut, a 1,000-foot swim-up bar (because who needs rides when there are strawberry daiquiris?

It’s hard to decide whether a water park in already-paradiscal Hawaii is a gross extravagance ... or just the best idea ever. The sheer beauty of Wet ‘n’ Wild in Oahu would indicate the latter. Spread over 29 acres and surrounded by natural cliffs, the park includes a number of attractions, such as the Flyin’ Hawaiian (rhyme forgiven), a slide that drops riders twelve feet into a pool blow, and Tornado, which drops passengers from a height of 50 foot through a 130-foot tunnel into a large funnel slide. The gem of this park is its 400,000-gallon Hawaiian Waters wave pool.

Even if Noah’s Ark in Wisconsin Dells, Wisconsin weren’t the largest water park in the country (it measures 70 acres all told), it would probably still top this list owing to its several record-breaking rides. Its Time Warp is the world’s largest funnel water slide (or “family bowl” ride), and its Black Anaconda, measuring a quarter-mile, is one of the longest and fastest water coaster in the country. Plus, hands down, this place has the best name.