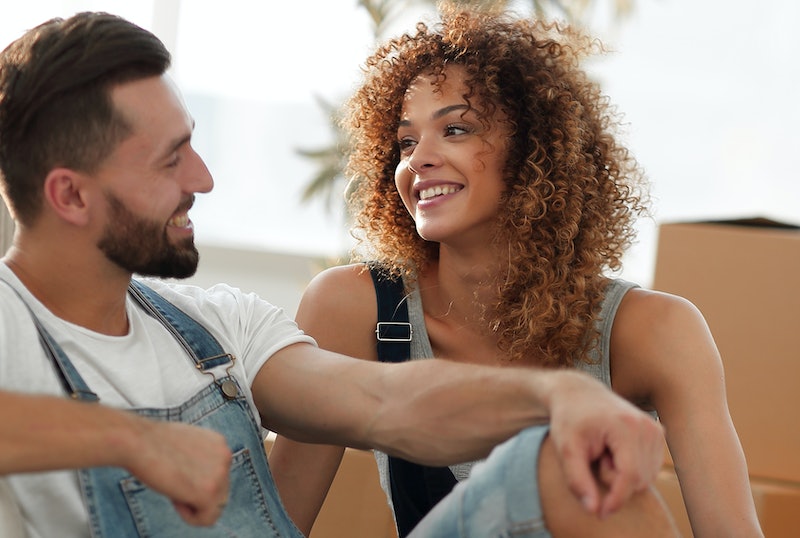 Moving in together before marriage used to be completely taboo. Just ask your parents: It's unlikely that they lived together before tying the knot. But today, it seems like everyone is shacking up. According to a 2013 report by the Centers for Disease Control and Prevention, between 2006 and 2010, about half of married women said they lived with their partners before the wedding. And 75 percent of women under 30 said they had cohabited with a partner.

While decades of studies have suggested that living together before marriage is more likely to lead to divorce, a recent investigation by sociologist Arielle Kuperberg of The University of North Carolina at Greensboro found no link between the two. Instead, she concluded, cohabitation makes no difference if you're already mature and experienced enough to sustain a long-term relationship. And that maturity, she noticed, often comes around a particular age. "Early entry into marriage or cohabitation, especially prior to age 23, is the critical risk factor for divorce," she told Contemporary Families.

Provided you're over 23 (or exceptionally mature, since some will argue that age ain't nothing but a number), there are a few other things you need to consider before signing that lease.

1. Are you listening to your spidey sense?

If your gut is telling you to be wary of moving in, listen to your instincts and try to figure out whether there's some concrete issue you two have that's keeping you from being 100 percent sure about the big move (see "finances" and "future" below). But don't confuse that initial gut feeling with normal nervousness. "Feeling scared is a good sign," Tracy McMillan, author of Why You’re Not Married…Yet: The Straight Talk You Need to Get the Relationship You Deserve , tells Glamour.com. "You understand that it’s a decision of big magnitude, and you’re undertaking something that’s a big deal and will impact your life."

2. Are you comfortable with each other?

If you can't go to the bathroom with your partner in the same house, or if you're a woman and your guy has never seen you without makeup, you're still in that awkward we-just-started-dating stage. That'll fade eventually (sorry), but you definitely don't know each other well enough to move in yet. Give it time. "If you’re already spending quite a few nights a week together, the transition to cohabitation will seem natural," according to eHarmony.com. "You’ve seen the bed hair, experienced the morning breath, observed hygiene and tidiness habits, and understand sleeping patterns."

3. Are you on the same page financially?

This is a biggie, since money comes up every day in ways big and small. You'll need to talk about how to split expenses, whether you'll have a joint account, whose name will be on the lease, and more — as well as figure out how to divvy up little daily expenses, like running to the deli for milk. Plus, you should discuss contingency plans, like what'll happen if one of you loses his or her job. Money might be a hard subject to talk about, but it's important to have similar values if you want to establish a firm foundation for the future.

4. Have you had your first fight?

If you never ever fight, that might not be a good thing (not to mention unrealistic), since being able to productively work through conflict can make a couple much stronger and help them gain essential problem-solving skills. "You’re going to need those tools when you move in full time," professional matchmaker Amy Laurent tells Glamour.com.

5. Have you had the "where is this going" talk?

Make sure you're on the same page about the f-word (you know, future). Does your partner want kids while you're more than happy just parenting your puppies? When it comes to the major issues, you're not going to change his mind, nor should he try to change yours. Talk about your expectations to avoid surprises and disappointment down the road.

More like this
How Ovulation Affects Your Sense Of Smell, Libido, & More
By JR Thorpe and Lexi Inks
I Spent 2 Years Trying TikTok’s Dating Advice
By Kailynn Johnson
5 Signs You Have A Toxic Relationship With Yourself
By Lexi Inks
Adam Levine & Behati Prinsloo Welcome Their Third Child Together
By Jake Viswanath
Get Even More From Bustle — Sign Up For The Newsletter
From hair trends to relationship advice, our daily newsletter has everything you need to sound like a person who’s on TikTok, even if you aren’t.