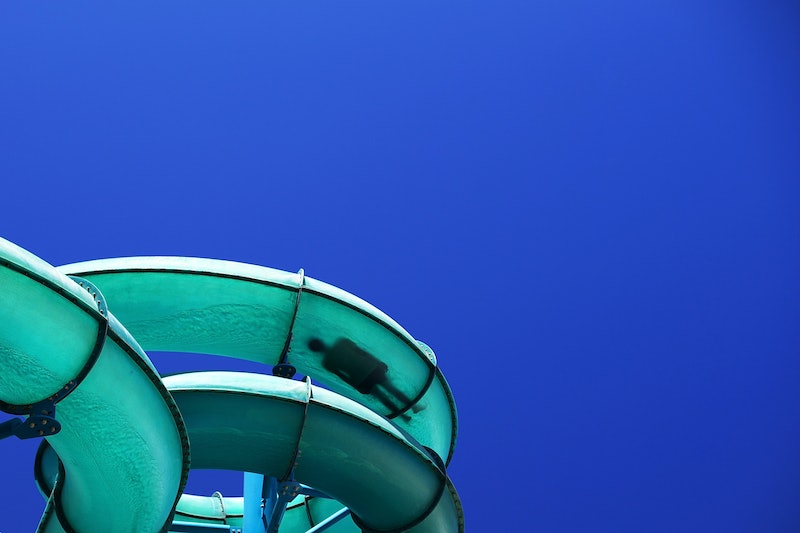 The brains behind Verruckt — a new water ride at Schlitterbahn in Kansas City, Kansas that’s taller than Niagara falls and faster than most roller coasters — has been stirring conversation on the Internet for the past month. Surely, it's owners would like you to believe that their new fear machine is the most extreme water ride in States. And don’t get us wrong: It definitely makes this list. But is it the only water ride to consider? We guessed not. As it turns out, there are lots of water rides all over America competing for the title of wildest aquatic experience.

Below, we look to the biggest and most insane water parks in America and highlight the extremest rides they have to offer. While many wow with their height and speed, others fascinate with the thematic adornments and innovative tricks — like upward-propelling jets, waterslide loops, zero-G funnels — just to name a few. From a military jet that’s been converted into a water-ride, to a slide that offers an up-close view of dolphins, to a tower that drops you through a floor from seven stories in the air, to the longest water coaster in the country, these are the 11 scariest and most fascinating water park attractions in the country.

If you’ve ever wanted the experience of riding down those inflatable emergency ramps off the sides of airplanes without, well, actually having that experience, try the Boeing 747 water ride at Evergreen Wings & Waves Waterpark in Oregon. It consists of dual water slides emitting from an actual Boeing 747. While the ride doesn’t offer the same height and speed stats that others do, this has got to be one of the most thematically-unique water thrills in the country.

Dolphin Plunge isn’t scary or even especially crazy — it’s just plain magical. The water slide begins by taking riders through a series of leisurely turns in enclosed tube. After that, the tube goes clear, and suddenly you’re underwater in a lagoon filled with swimming dolphins. Free Willy fans and seekers of Lisa-Frank-grade splendor need look no further than this ride.

Discovery Plunge combines the user’s-rights appeal of those Choose Your Own Adventure books with the trippiness of Mario Kart’s Rainbow Road. Riders choose which imagery they’d like to see on the ride, and then, in the midst of drops and curves within a series of enclosed tunnels, multicolor lights and holographic images appear. It ups the water-slide game considerably, and may very well be every Iowan kid’s anti-drug.

Imagine taking one of those family-sized circular boats from a raft ride and putting it on the track of the world’s longest roller coaster. That’s exactly the idea behind Mammoth, and the result is awesome. Covering three acres of the Indiana theme and water park, the ride uses savvy technology — LIMS (linear induction motors) — to send groups of six up and down a range of hills and around turns at incredible speeds.

This raft ride includes an enclosed 720-degree turn followed by a seven-story drop followed by — and this is the best part — a near-vertical “wave” section (think of a funnel ride tipped on its side) that gives riders the sensation of zero-gravity. It’s not often that such thrills, typically found in the domain of roller coasters, can also be paired with splashes.

In the movie Anaconda, a big snake swallows a man (Jon Voight!) and then spits him back out whole. Something similar happens to riders of Black Anaconda, at Noah’s Ark in Wisconsin Dells, Wisconsin. The black covered slide-coaster combo reaches speeds of 30 mph and stretches for a quarter-mile, making it one of the longest water coaster in the world. In addition to serpentine coils, it also has parts where jets of water push you up hills. Which I guess is supposed to mimic a snake’s digestion? Ew? (Cool.)

If you think waterslides are a plunge-and-splash deal with little capacity for roller-coaster-like longevity, then you haven’t been on Wildebeest at Holiday World & Splashin’ Safari, the longest waterslide in the world. Granted, there’s more to it than gravity: Conveyors and LIMS (linear induction motors) propel riders up several inclines, through tunnels, and around turns. At a third of mile in length, the ride has been named the best waterslide in America by Amusement Today for four years in a row.

With Verruckt, at least, you can see the drop you’re about to experience from the top of the ride. But Bomb Bay, in Orlando, Florida, doesn’t grant its riders such niceties. You begin the ride in a small phone-booth-like chamber, waiting with bated breath until the floor drops out beneath you. After that, it’s all terror: A 75-foot near-vertical free-fall to the bottom (where, incidentally, you can see a picture taken of you the moment the floor opened).

Summit Plummet at Disney’s Blizzard Beach in Florida is one of a few truly extreme waterslides in the country. From a height of 120 feet, riders slide down a near-vertical incline, reaching speeds of around 60 mph. The scariest part about Summit Plummet? Unlike many extreme water rides, it doesn’t use any tracks or vehicles. It’s just you, the slide, and a dizzying plunge.

Scorpion’s Tail makes use of the the door-in-the-floor suspense of Bomb Bay, but instead of sending riders down a plain ol’ drop, it sends them through a near-vertical loop — the first (according to the park) of its kind in America. You are sure to be terrified ... and very wet.

Verruckt doesn’t need much of an intro. With a height of 168 feet, a top speed of 65 mph, and a slope of 60 degrees, it’s a triple record-breaker: This ride is the tallest, fastest, steepest waterslide in the world. And, until another park steals the throne, Verruckt wins out as the most extreme water ride in the United States.

More like this
Andie From 'How To Lose A Guy In 10 Days' Is A Total Gemini
By Nina Kahn
The 3 Best Heated Steering Wheel Covers
By Margeaux Baulch Klein
Here’s Your Daily Horoscope For January 30, 2023
By Mecca Woods
Here’s Your Astrological Forecast For February
By Nina Kahn
Get Even More From Bustle — Sign Up For The Newsletter
From hair trends to relationship advice, our daily newsletter has everything you need to sound like a person who’s on TikTok, even if you aren’t.