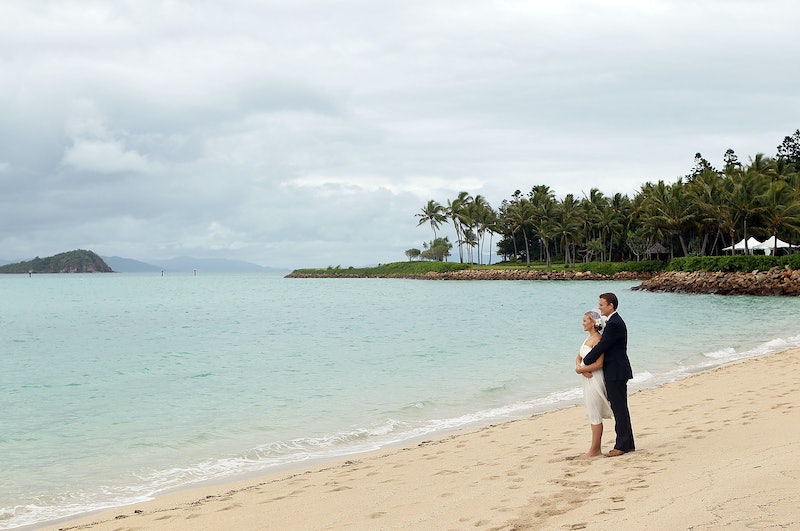 To be clear, I’ve never planned a wedding. I’ve never even been engaged. But at the ripe young(ish) age of 28, more and more of my friends and acquaintances are tying the knot. Like many straight American women, I’ve thought a lot about the “institution of marriage,” and whether it’s something I even want to be a part of. In many places, marriage is still a right reserved for heterosexual couples, and we’re not exactly a nation of people exalting the holy institution (looking at you, Britney Spears). If anything, straight people are kind of ruining marriage — at least the image of marriage we were exposed to via the early-'90s crop of Disney films. I’d like to see a follow-up mockumentary where Prince Eric and Ariel get divorced and have to navigate shared custody of their mer-children. Ariel will struggle to adapt back into civilian life and contemplate ways to find employment as someone who only recently learned how to walk, but is too recognizable to work in an entry-level job. Statistically, it’s not unlikely that at least a handful of the princesses would be on marriage number two by now.

I also take issue with the gendered nature of heterosexual marriage in the U.S. Women seek two-thirds of divorces, and are more likely to report discontent in their marriages. Even in egalitarian marriages where both partners work outside the home, housework and childcare are overwhelmingly left to women. “Heterosexual marriage, especially among white, educated, and well-off couples, is still a gendered social reality and a gendered institution,” say sociologists Karyn Loscocco and Susan Walzer in Gender and the Culture of Heterosexual Marriage in the United States. Also, “divorce is a big factor in the feminization of poverty,” Dr Zora Simic of University of New South Wales argues. Many of our mothers quit their jobs to raise us, got divorced, and were left with less money than their earning exes. Think back to dystopian future Ariel. Without the income of her land-dwelling Prince, how will she enter into an employment culture that doesn’t value former mermaids? In certain lights, marriage doesn’t look so hot.

There are parts of the whole process, from pre-engagement traditions to baby-making to old age, that sound downright oppressive. And yet, I think it’s something I will want to be a part of some day. I’m a romantic, and I believe that having a partner to experience the greater part of my life with sounds sort of dreamy. I like the idea of standing in front of our friends and loved ones and saying “Hey, we’re going to take care of each other and hold each other accountable to all of you. We are going to move through the world together and lift each other up, because we think each other are beautiful.” I believe, perhaps naively, that it’s possible to have a successful, loving, equal marriage. Realistically, I know that my hypothetical marriage is no safer than anyone else's, but that won’t stop me from giving it a go! Also, I like throwing parties and giving my friends an opportunity to dress up (read: give me presents).

Dr. Simic suggests that a healthy, progressive marriage starts with the wedding. So knowing what we know about marriage, and holding our feminist ideals close to our hearts throughout the process, how can we get off on the right foot? Welcome to Feminist Wedding Planning 101. The syllabus has seven steps.

1.) Talk about changing or keeping your pre-marriage last name before the wedding.

The reasons married couples choose to have one last name make sense to me, particularly if they plan to have children. There’s something sweet about a name for a family unit. It’s certainly easier to say that the Blah Blah Blah family is coming over, rather than naming both people and/or their children individually. We’re lazy, really.

Whether you decide to keep your name, change it to his name, hyphenate, or come up with a whole new family name, talk about it. Remember that a woman taking a man’s name symbolically means leaving her own family and entering his. If that’s something that speaks to you, great. If it doesn’t, come up with a different idea. A study by weddingdays.co.uk involving 200 brides-to-be found that about a quarter of women planned to keep their own last name after getting married. Whatever you choose, make it a conscious decision that you make together. Oh, and clue your DJ in. I was at the wedding of a couple who were keeping their own last names and the DJ went on and on about Mr. and Mrs. so and so.

2.) Do away with the antiquated “asking permission” ridiculousness.

If any of us are still living at home when we get engaged, it’s probably for financial reasons rather than traditional ideas about leaving the family home. The average age of marriage has been steadily creeping up for decades. By the time we’re getting engaged, many of us have lived away from home, held down jobs, and filed our own taxes. Although we may decide to keep our parents in the loop, we don’t need to ask permission anymore. So why oh why should your boyfriend be expected to ask your parents — in particular your father — for permission to marry you? Sure, it’s courteous to alert your parents of any change in your marital status. Of course you want them to celebrate your love alongside you (and...maybe pay for that celebration). I would hope that if a man asked my parents for permission to marry me, my parents would direct him to the person who is responsible for making the important decisions about my life: me. As Laura Bates, founder of Everyday Sexism, so eloquently puts it “If I'm going to get married, I sure as hell want to be the first to know about it.” You don’t need to be given to anyone.

And on that note,

3.) Walk your damn self down the aisle.

Or, if you like the idea of involving parents or older loved ones, do it for that reason and not the “giving away” piece. You’re already away, remember? Depending on your relationship with your family, they will be involved in your courtship and wedding and marriage. But in the developed world, thankfully most of us are entering marriages of our own accord. Our parents don’t have anything to do with it. Also, I would like people to be gawking at how incredible I look, thankyouverymuch. My parents included!

If you’re like many women walking down the aisle today, you’re old and employed and already sleeping with your fiancé. Frankly, a 32-year-old women being handed to her fiancé by her daddy could look a little ridiculous.

Premarital sex is an almost universal experience in America, with 95 percent of us deciding not to wait until the big day. The big poofy white dress is pretty, and if white suits you and it makes you feel good, get your David’s Bridal on, girl. But if you decide that actually, you look better in purple, then wear that. Part of having a feminist wedding is doing you, whatever that means. I personally will not be wearing a white wedding dress on my eventual big day, lest anyone think I’m anything other than a sexpot.

Use your dress as a conversation point, because everyone else will. Wedding dresses are expensive and often stunning, and guests do give them the attention they warrant. Tell your confused auntie that you decided to wear yellow because you think it’s silly that brides are still expected to exude purity on their big days. Buy a fair trade dress from Celia Grace and tell guests that you wanted to make sure the women making your dress did so under safe working conditions.

5.) Adapt the ceremony to fit your beliefs.

This is the age of vow and ceremony creativity, but it’s still a legal or religious ceremony. You may come across some language in the traditional or required text that doesn’t fit with your worldview. In order for a marriage to be nationally recognized in Australia, for example, the celebrant (officiant) must say that the marriage is “the union of a man and a woman.” Friends of mine opted to have their celebrant follow up with “but Dan and Katie believe that marriage should be available to all Australians, and will work hard to make that happen.” One of the bridal party on Katie’s side was her oldest dearest friend, a “bridesman,” and it was important to her that what was said about her marriage was reflective of their values and respectful of their loved ones.

In particular, those who have religious weddings may find that some of what is typically said at a wedding doesn’t jive with their feminist values. In Jewish weddings, the bride traditionally circles her new husband seven times, a practice which has been interpreted in many ways, most of which are rooted in archaic ideas of being a “wife.” Many Reform or progressive Jews have opted to circle each other, to keep the tradition but modernize it to fit their views of gender equity in marriage. Get creative.

I say this less for political reasons and more because everyone scrambling to catch the symbolic betrothal roses looks stupid. But seriously, the imagery is problematic, and it’s not even problematic in the name of fun! It makes it look like marriage is some sort of prize that all single women have a hankering for. People get seriously hurt in these flower catching contests.

Since we’re thinking critically about traditional wedding practices, what does it even mean? Why do we have to compete with other women to determine who will be next in line for the poofy dress and multi-tiered cake? Maybe at my wedding I’ll throw a handful of gift certificates for massages into a group of women. That’s a prize worth diving for, and it doesn’t reinforce the stereotype that single women at weddings are just waiting in an imaginary line for their turn.

7.) Everyone wears an engagement ring.

In the lead-up to your wedding, you’re equally on or off the market. However the engagement went down (however you wanted it to, that is), you both have decided to get married. No one belongs to anyone. Or rather, everyone belongs to each other equally. Or however you articulate it to each other and the world. Feminism! And according to a survey conducted by XO Group Inc (parent company of wedding site The Knot), 5 percent of engaged men are wearing rings these days. Let's keep things equal.