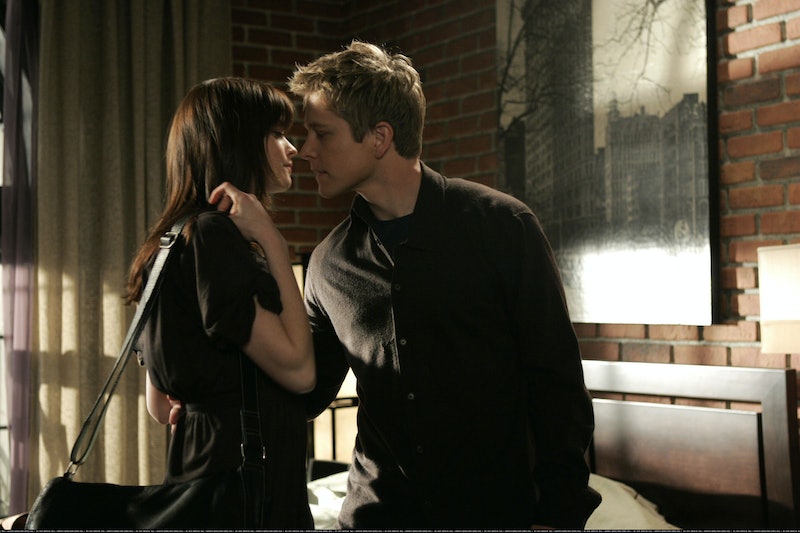 College is tough enough as it is — you have tests, epic amounts of work, a usually minuscule budget (hello ramen, my old friend), and of course, the occasional (fine, frequent) existential crisis. To make things even more difficult, there's that little thing called college dating . While some lucky ladies travel through the hapless sea of college sexuality with soulmates in their arms at all times, the majority of us opt for a more adventurous route — and have the walks of awesome to prove it.

And let's face it — in college, while no man is the same (unless you went to clone school, in which case, let's chat later 'cause I love me some Orphan Black ), there are certainly tropes that you run into. Sometimes, these guys are just a one-night fling, and other times, they become such a fixture in your romantic timeline that they become the reason you take up songwriting. But either way, if you're into dudes, these guys are a bonafide part of your college experience. So whether you've dated a handful of these guys, one of them or all of them, these are the 17 guys you will probably date — or might have already dated — in college. Ain't no shame. We've all been there.

Things seemed like they made sense when you first met. It was love at first sight! Actually, it was just really, really convenient. But oh, when the "we live next door to each other" goggles come off, mornings have never been more awkward. It's just so hard to be cordial and look at someone in the face when all you can see in his eyes ... is his penis.

But you should give it a shot, right? I mean, you had chemistry that night so, why not? Oh, he wants to argue with you about how he doesn't think climate change is a thing that is happening? Yeah, this isn't going to work.

He's got soooo much knowledge since he's three years older than you — or so he says. He keeps referring to you as "so young," and that's just mean and weird because you're only three years apart, and that's not a lot by any means. Learn to count, dude. And also, stop being such a patronizing a-hole while you're at it.

"It's a passing phase," you tell yourself freshman year, as you spend your weekends downing red Solo cups of Jungle Juice and playing beer pong, wondering if this phase will ever pass for him, too.

The Guy In Your Class You're Doing A Project With

The Guy With The Drugs

I also listen to great music and sincerely love wearing Birkenstocks, you tell yourself sophomore year during your stoner phase. Our conversations seem so deep! But wait — what were they about? What do you two talk about? Maybe it's time to end this.

The Guy Who Wrote You A Song

It sounded really deep, but then you found out he writes songs for every girl he gets involved with. Also, he seems to be more in love with his guitar than anything else. His guitar is named Sheila, which is also shameful in retrospect.

This is my personal CW show, you tell yourself during your illicit affair. He ends it, blaming it on "all of those papers he has to grade ... including yours."

He's so smart. He's probably going to be a doctor or biophysicist or maybe he'll move to Indonesia and develop a radioactive cure for something. Unfortunately, he never lets you get a word in, either. He also wears ties to class in preparation for his future. Nope.

Wait. What exactly is he doing here anyway?

This might have been during your All-American, "I have really intense school spirit" phase. You might also have been going through a political phase and thought this was the way you could affect The Man (or just the school administration). You might have also just wanted your dining hall to have more Chinese food nights.

The Actor and/or a cappella guy

"Caught in a bad showmance," as some say. But the lights come on and you're like: "Oh. So you are not Danny Zuko IRL, and you are not the one that I want. Sorry for getting my spandex in a twist for a semester."

Your Ex From Back Home

JUST TO GET AWAY FROM ALL OF THIS.

The Guy Who Breaks Your Heart

There's always one guy who actually stings — the one that you actually thought was "The One." Getting over him sucks, and it's a painful long haul through the rest of the semester, but hey — just like college, it's a learning experience that makes you smarter and wiser. ... and at least now you know not to date whatever his name is again.

Benedict Cumberbatch (In Your Head)

Hey, TV relationships can be real. Sometimes, little floating clouds of dreams and fantasies are just easier than the smog-filled testosterone jungle of reality that's in front of you. Plus, he's probably super mature.

Provided your snack bar sells them, then yes, absolutely. Those two men will never let you down.

No One At All, Bitches

Screw needing a dude in your college years. Unless he's imaginary Benedict Cumberbatch or Cherry Garcia incarnate. Then maybe.