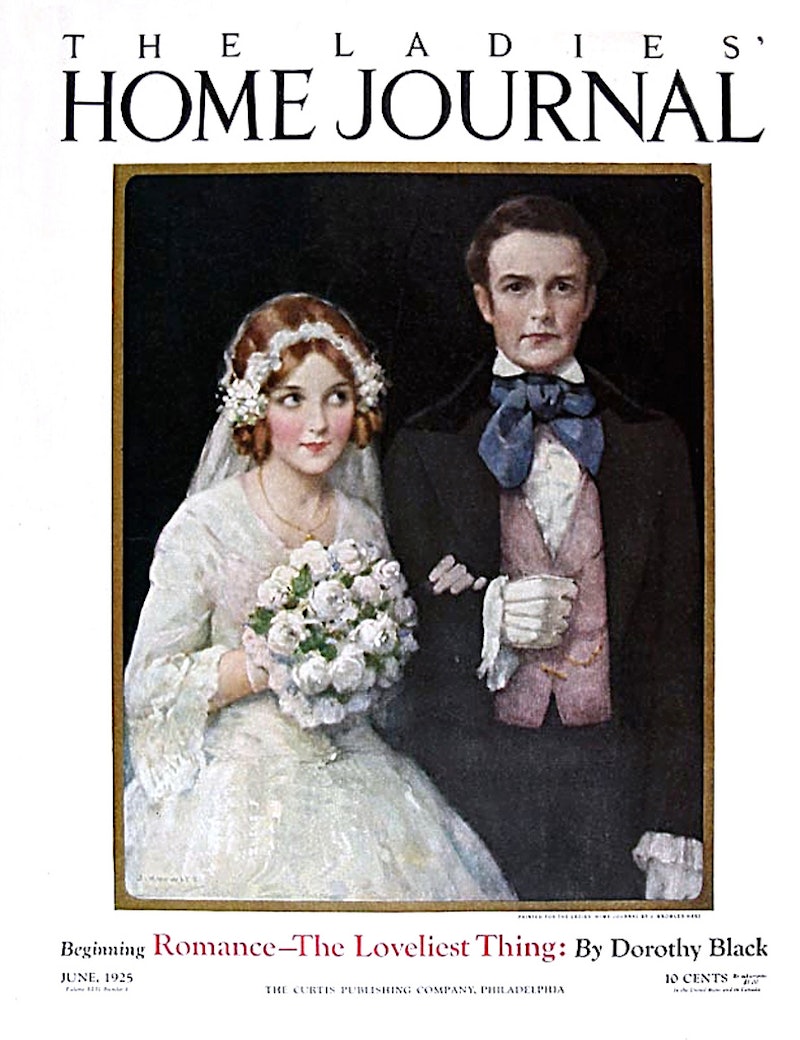 Wedding magazines aren't exactly known for being socially progressive. And because the average length of time people read them (or at least admit to reading them) for is only about a year and a half, a lot of the same stories keep getting repackaged again and again. Also, let's be honest: To sell newsstand copies, they make the cover lines almost unrealistically positive. That's why our lifestyle editor Julie Alvin made her own, honest bridal magazine covers, urging readers to flip to stories like "12 Things Your Bridesmaids Will Say Behind Your Back" and "30 Songs For When the Dance Floor Is Awkwardly Empty." I bet they'd sell like hotcakes if they were real.

But all of these things don't mean I don't love poring over the gorgeous photos in good ol' bridal mags once in awhile, especially if I get my hands on some older ones. And because they are, for the most part, a little staid, it's awesome when they do something unexpected. Brides, for example, put Hayden Panettiere in a strapless dress that shows off her back tattoo on their April/May 2014 cover, despite lots of people still frowning on tattoos these days. So good to see them recognize that it's the 21st century and not every bride is a cookie-cutter picture of innocence. Looking through bridal mags of years past reminds me how much they really do change with the times, however slowly. Just take a look at these covers from the last 100 years.

La Gazette du Bon Ton was a French fashion magazine published by Condé Nast from 1912 to 1925. I love how older mags featured frame-able illustrations on their covers.

The rosy-cheeked bride looks a bit uneasy in this remarkably pretty, yet somber illustration.

Watercolor-style covers and ads were popular in the 1930s, and it seems non-white wedding dresses were a trend, too, much like today. The caption explains: "There was a small fad for colored wedding dresses during the early 1930s, including blush pink, pale blue, and seafoam green. Sleek calla lilies were also popular for bouquets."

Country Gentlewoman was a section of the agricultural magazine Country Gentleman. The cover girl's impeccable eyebrows, red lipstick, and curls are characteristic of post-war weddings.

Folded in 2002, McCall's was a general-interest women's magazine. Here, a typical bride of the era with an empire waist dress and long sleeves.

Buenhogar, the Mexican version of Good Housekeeping, featured a bride in a flowing gown with bell sleeves on their 1970 cover. That's one super-sized train!

Look how fat bridal magazines were before the recession truly hit (keep in mind that they're prepared months ahead).

Just to compare with the vintage ones, here's the Hayden Panettiere cover with the tattoo.

More like this
'Bachelorette' Vet Clare Crawley Unveiled 2 Special Wedding Day Accessories
By Stephanie Topacio Long
These 4 Zodiac Signs Make The Best Bridesmaids
By Nina Kahn
'RHOP' Stars Robyn & Juan Reportedly Got Remarried & Filmed The Ceremony
By Brad Witter
Phoebe Dynevor Serves ‘Bridgerton’ Underboob In Stunning Floral Gown
By El Hunt
Get Even More From Bustle — Sign Up For The Newsletter
From hair trends to relationship advice, our daily newsletter has everything you need to sound like a person who’s on TikTok, even if you aren’t.