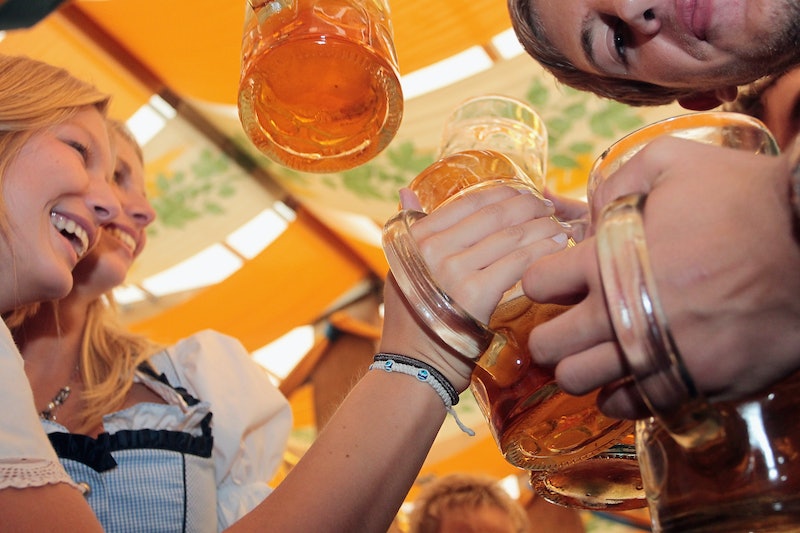 But while you may continue your drinking (or you may not, because you have substituted it for something else, like soberly eating piles of mac 'n' cheese), you may notice that something changes dramatically over time: your hangovers. It's not just that they get worse (and holy mother of Jack Daniels, do they get worse), they get ... different — and you come to feel differently about them, too. By the time you've graduated, you're no longer posting a Facebook status that says, "OMG so hungover, NEVER AGAIN LOL." Because you just know better.

It ain't pretty. It burns. Oh, how that headache hurts. It's probably because you consumed copious amounts of Keystone Light and Jungle Juice, is it not? Or is it because you've never drank so much before in all 18 years of your life? But there is nothing — NOTHING — that will stop you from partying just as hard the next day. Besides, the more hungover you are, the more of a badge of pride it is.

Now you know how to drink multiple days in a row. You've discovered the most important secret pretty quickly: EATING INCESSANTLY. The hangovers are dulled (sort of) and you've at least stopped posting about them on Facebook. You let the pictures do the talking, and you feel slightly weird that you pose in all of your pictures with one hand on your hip and the other holding up a red Solo cup, but you're not going to tell anyone about that.

You've now discovered that there are two kinds of hangovers — weekend hangovers (brutal, mind numbing, do-not-leave-the-dorm the next day kinds) and weekday hangovers (far less painful, and in fact, barely even hangovers at all). You're just proud that you went out during the week, and you sport sunglasses in class the next day to show that you are fearless individual who doesn't let the days of the week define her.

On weekends, you post cryptic Facebook statuses the morning after you go out saying things like, "Why do I say things like that to people. Never opening my mouth again. Listening to Taylor Swift all day."

Your hangovers are not as bad as they were first semester freshman year, but that might be attributable to the fact that you can't stomach that much Jungle Juice anymore. It just tastes like sugar, urine, and rubbing alcohol. Since your palate is changing (or maturing, shall we say), you're starting to eschew that old colorful alcoholic "drink" or whatever it is (sugar, urine, and rubbing alcohol, probably) for cheap bottles of wine.

You're a classy lady now. You've even stopped wearing sunglasses to class. Your Facebook posts have even gotten more esoteric, so people just think you're quoting really obscure indie bands and not reporting about your night's events.

You're so classy that you've taken to only drinking wine, and therefore, while in the midst of your bourgeois consumption of Woodford Reserve, you've begun to discover that wine hangovers actually hurt like hell. Shouldn't you have gotten stronger by now?

Come to think of it, all hangovers really hurt. But you'll fight it with some ill-advised coffee (BAD CHOICE, my friend) and still have productive Sundays! Actually — nope. Nothing productive happening over here on Sunday. That trip to Wal-Mart will have to wait till next month.

In an attempt to ride out of your college years in a blaze of glory, you quaff boxes of wine and vodka plus the mixer of your choice. Every morning is filled with a painful, pounding headache but YOU. WILL. NOT. BE. STOPPED. Wait. Was this fun a few years ago? You used to be a champion! But at least you know the remedy: sweatpants and Chinese food, please ... and Vitamin Water Excedrin. Definitely the Excedrin.

You are still a champion, but you're slowly but ever so surely retiring because for the love of whiskey — hangovers freakin' hurt. And besides, you've begun to find yourself filled with fantasies and thoughts like wouldn't Sundays be nice if I did something other than roll around in bed reaching for Excedrin? It would be so fun to do crafts or clean your room or anything that isn't "feeling like shit!"

For 22, you feel ... old. But you're not. Wait. Are you? Let's defy norms and keep partying! Wait — ugh. Hangovers combined with about-to-graduate existential crises do not make a pretty mix.

You post Facebook statuses like this: "I AM NOT IN COLLEGE ANYMORE. NEVER AGAIN." You were a champion. You still are. Just not the drinking sort anymore, my friend. But that's OK! Your new apartment is too small for a beer pong table, anyway.

More like this
3 Zodiac Signs Most Likely To Be The Center Of Attention
By Nina Kahn
Isa Guha Is Taking The Lead
By Charlie Mock
This Psychological Effect Might Be Keeping You From Hitting Your Goals
By Lexi Inks
Here’s Your Daily Horoscope For September 27, 2022
By Mecca Woods
Get Even More From Bustle — Sign Up For The Newsletter