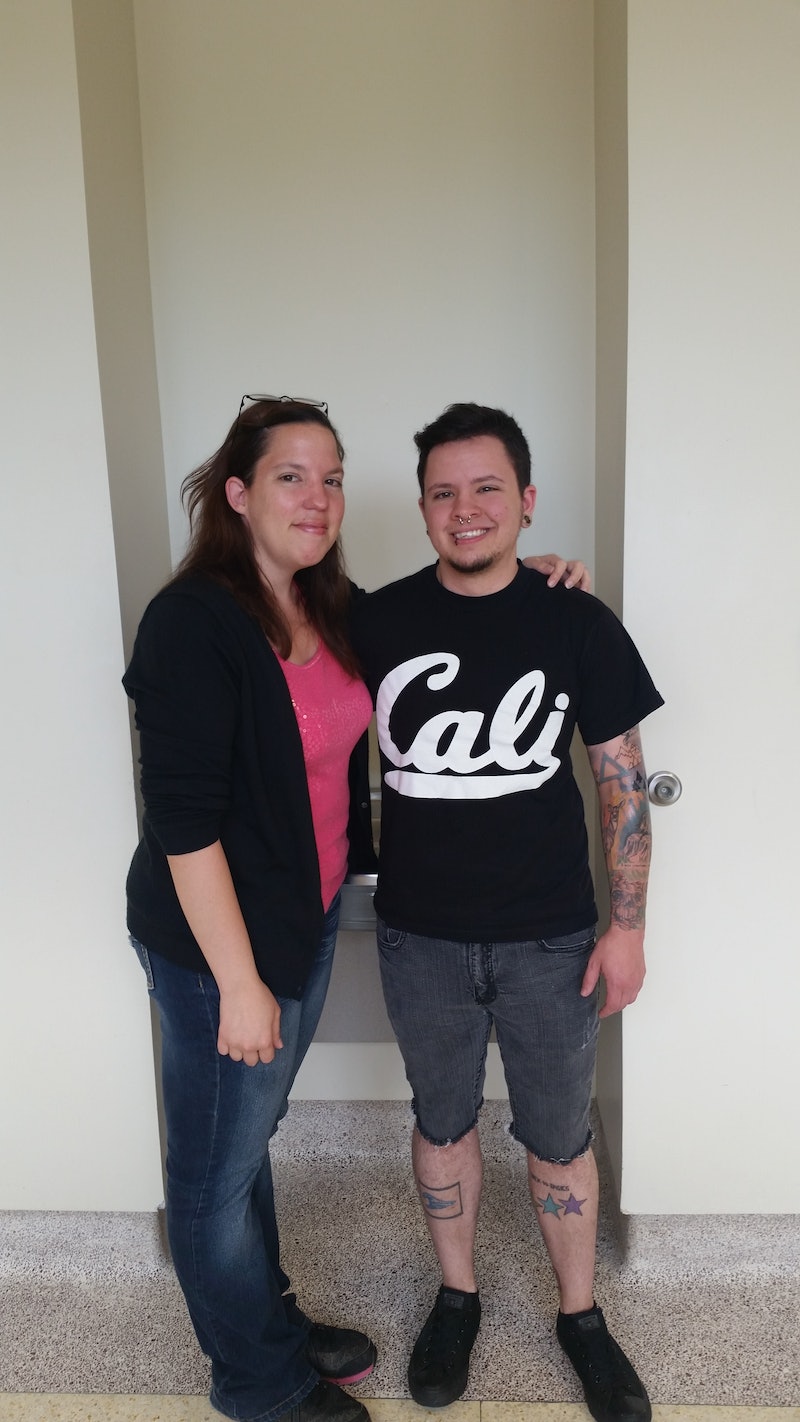 The phone rang loudly in our busy house. My very pregnant mother was a bundle of nerves, biting her trembling lower lip. This was her ninth — and last — child. She already had three girls and five boys. The stench of the testosterone was overpowering. Mom grabbed the phone with shaky hands. Eyes closed tightly, she spoke into the receiver: All right doctor, what am I having? My brothers and sisters huddled around her chanting "boy" or "girl." Mom started to sob and scream out, I'm having a girl! I let out a sigh of relief.

My baby sister Erica* was born when I was 13 years old. Erica had big brown eyes and long, soft light brown tresses that tickled her back. From the day she came home, her smile and girly giggle brightened my days. She was my baby.

When I saw the change on Facebook for myself, I still thought that maybe it was a stunt. News this big, Erica would have surely told me herself, wouldn’t she?

My parents weren't in the picture much, so the girls in our family had to take care of the little ones. I made sure Erica was bathed and fed. I walked her to school and helped her with her homework, and even helped out in her classroom. I took Erica to my cheerleading practice and put my social engagements on hold for her.

Erica would notice me walking home and run down the sidewalk screaming my name. She couldn’t pronounce “Karen” so she called me “Nera.” I taught her how to draw and count. We went on outings, and I took her out to eat on Fridays. I called it Sister’s Day.

It was the mid '90s, and Beverly Hills 90210 was all the rage. Erica knew I had the hots for Jamie Walters who played "Ray" on the show (that was, before he threw Donna down the stairs). We used to have mock fights as to who could stake him as her "boyfriend."

But Erica was a tomboy for much of her youth, and in high school, she confided in me that she was attracted to both women and men. She announced that she considered herself to be pansexual, or attracted equally to men, women, and genderqueer people. She dated a man and openly told me that she enjoyed the sex.

But something was never quite settled for Erica. Her hair began to get shorter, and her piercings seemed to multiply. She appeared sullen all the time. She got a tattoo of a creepy tree with twisty branches and dark undertones on her chest. I wondered if it was a symbol of how complicated and dark she felt.

My husband was the first to know. While looking at Facebook one morning, he noticed that Erica had changed her name to "Eric," and her gender to male. At first, I didn’t believe it — I thought my husband was joking. When I saw the change on Facebook for myself, I still thought that maybe it was a stunt. News this big, Erica would have surely told me herself, wouldn’t she?

As open-minded as I thought I was, a part of me recoiled at the news. My baby sister had been a big part of my life — and now, suddenly, I had to think of her as a "him," and learn to call him by a new name?

When Eric eventually told everyone his news in person, it felt as if there was a death in the family, with no physical body to mourn. Erica legally changed his name to Eric, and then changed his gender. He was 19. The day he went to court to finalize the change, we sat and talked on my tattered brown leather couch. It reminded me of the old days, when we spent Sister Day together. Eric told me that he had always felt like he was in the wrong body. I asked him if he was sure this was what he wanted. He said yes.

The transformation wasn't just a process for him — it was a process for our entire family. It was upsetting to see him use binders to press down his large breasts, which made it difficult for him to breathe. I was alarmed when he used a device similar to a penis to allow him to pee in the men's bathroom. I cringed when watching him inject testosterone shots into his leg and start to develop a deep voice. If I'm honest, it is still hard for me to see him with facial hair. I'm not proud of that.

My visceral reaction to Eric's transition shocked me, since I've always considered myself a progressive person. I have always believed that people should do what makes them happy, as long as they aren't hurting someone or doing anything illegal. In my heart, I knew that this was what Eric wanted, and that it wasn't hurting anyone. That notion allowed me to accept Eric's decision, but I'd be lying if I said it's been easy.

Luckily for me, Eric understands that his transition has been hard for me to get used to. He is more than supportive of the process I am going through as his sister. I do not for a single moment take for granted the fact that he allows me to tell his story from my perspective in this essay — even when that means beginning by describing a time when he was still my baby girl.

Sure, our relationship and life has changed. No longer can we both complain about menstrual cramps (though he kids that he still gets sympathy cramps). Eric is in a committed, long-term heterosexual relationship with a woman. He works a full-time job and has his own place. I've come to realize that the biggest change has been not his gender, but the fact that Eric is now an adult.

We don't have Sister's Day anymore, but we do have days we choose to spend together. And really, that's all I needed, all along.

*Names have been changed