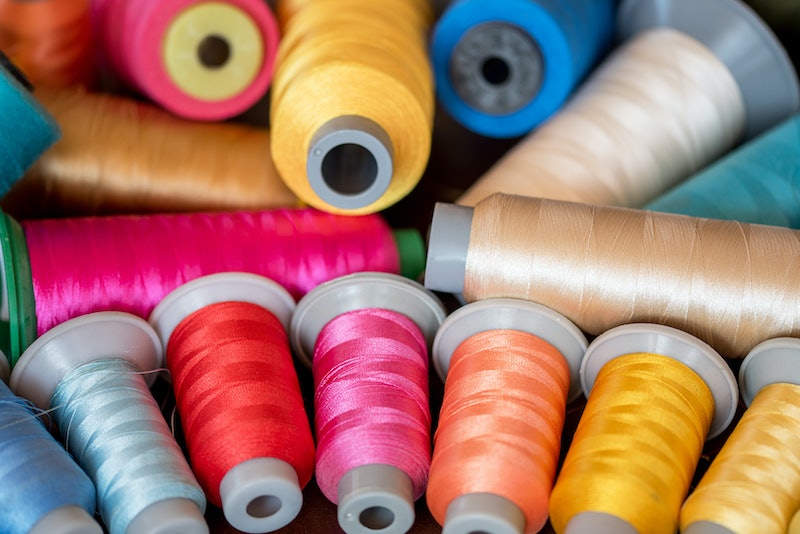 When society thinks of hard labor, of physically stressful work, they most often think of men as the ones doing it. In her new photographic series, "A Woman’s Work is Never Done", London-based artist Eliza Bennett sewed thread through her hands to draw attention to the physical toil that low-paying jobs can take, on both men and women. By turning her own skin into a canvas for traditional embroidery, Bennett has created an incredibly poignant tension between delicate skill and the invisible suffering that often accompanies it.

The visual discomfort provoked by the piece is meant to challenge the notion that women’s work is “light and easy,” and certainly opposes the stereotypes that surround the typically female-dominated tasks of caring and cleaning.

However, Bennett was careful to define her work as something that was not exclusively targeted towards women's issues:

Some viewers consider the piece to be a feminist protest, for me it's about human value. After all, there are many men employed in caring, catering, cleaning etc... all jobs traditionally considered to be ‘women's work’. Such work is invisible in the larger society, with ‘A Woman's Work’ I aim to represent it.

This project is one of three public series by Bennett. Her other two works, "Interior Objects" and "The Room of Undressing" also work with depictions of the human body to reveal tensions between appearances and inner truths.

We will be watching Bennett with wide eyes, eager for more of this kind of provocative work. Though the first impression behind this photographic series was "ouch," a closer look reveals a sympathetic tribute to exploited workers everywhere.

More like this
25 Inspiring Quotes From Black Women To Celebrate Black History Month
By Kyli Rodriguez-Cayro and JR Thorpe
24 History-Making Black Women You Probably Didn't Learn About In School
By Ayana Lage and JR Thorpe
15 Black-Owned Liquor & Wine Brands To Add To Your Bar Cart
By Alexis Morillo
6 Organizations Fighting Police Brutality That You Can Support Right Now
By Syeda Khaula Saad and JR Thorpe
Get Even More From Bustle — Sign Up For The Newsletter
From hair trends to relationship advice, our daily newsletter has everything you need to sound like a person who’s on TikTok, even if you aren’t.