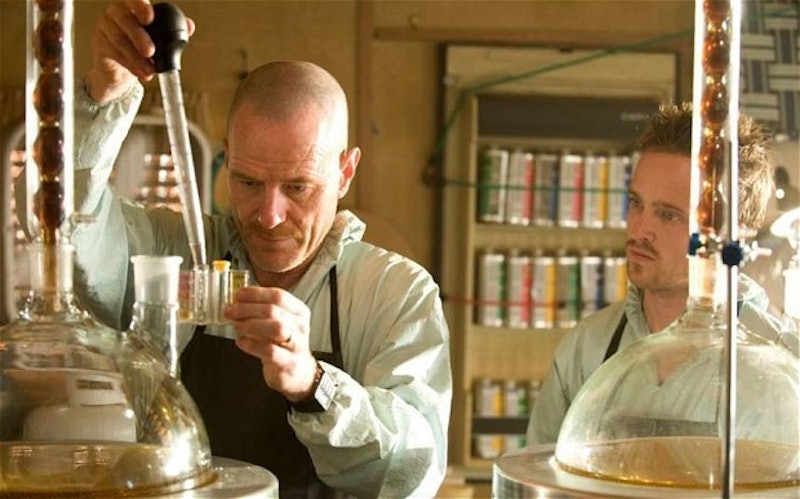 Science is awesome. If you’ve never gotten your hands good and dirty while messing around with some chemicals — whether they’re the fancy ones you find in a high-tech science lab or whatever you can come across in your kitchen — then you’re missing out. In the words of one of the greatest chemists to have ever lived, “Yeah, science!”

Although the science experiments of your youth probably involved things like vinegar and baking soda (makes a mini volcano!), or the effect that different liquids have on plant growth (a fourth-grade project of mine which was a disaster), as an adult, wouldn’t it be more fun to use alcohol? Think about it: You could nerd out — and then drink your experiment! It's a win-win.

So when my esteemed editor asked if I wanted to try out some science experiments you can conduct with alcohol and write about it, who was I to say no? An assignment that would make me feel sort of like Walter White and get me all tipsy by 3 p.m.? It’s the stuff of dreams, honestly.

Although there are tons of experiments out there that involve alcohol, the purpose of these is that you'll be able to actually drink your findings. Vodka and sugar in water may make your flowers live longer, but are you really going to drink that? Probably not. Here are four that are fun and still drinkable, even after you've played with them.

Hey, it was a tough assignment, but someone had to do it.

Both vodka and Gummi Bears are delicious enough to stand on their own, but when you combine the two? It’s double the delish.

Grab a handful of Gummi Bears and toss them in a glass with vodka. In a few hours, you’ll not only notice that the bears are so bloated with vodka that they’re almost transparent, but they’ve also almost doubled in size. The reason for this is that Gummi Bears are a combination of warm gelatin and water. As the liquid cools, and the water is drawn out, it becomes the gelatinous, chewy candy we all know and love.

When they're placed in vodka, or any alcohol for that matter, the molecular make-up of both the alcohol and the Gummi Bear causes the alcohol to move into the candy, forcing it to expand and become our new favorite treat.

Pour your vodka and Gummi Bear concoction over ice, and enjoy. You’ll notice the vodka has a subtle sugary sweet taste to it, and once you bite into a drunken Gummi Bear, you’ll never eat them straight out of the bag again.

I’ve never been able to drink an entire glass of whiskey without weeping halfway through it and regretting that I tried to be “cool” by ordering it in the first place. But when the need for some whiskey does come on, and it’s pretty rare, I opt for a shot. (I find that shots keep my weeping to a minimum, because down the hatch and voilà!)

This experiment is not only fun to watch, but you get your shot and your chaser all in one. Simply fill two shot glasses, one with water and one with whiskey. To keep the two liquids separated, place a credit card or something else equally thin and non-absorbent between the two (leaving a small opening for the liquids to work their magic), with the water on top. You’ll find that within 10 minutes the two liquids have switched places.

All liquids have a different density, and when placed together, the heavier one will sink, and the lighter one will float. In this case, the whiskey is lighter, so it creeps up past the card you've placed to separate them, while the water slides down to the bottom shot glass.

My attempt was messy and I wasted more whiskey than I’d like to admit. It also wasn’t as pretty as it was in the video below. I think I need more practice.

Did you know that tonic water glows in the dark when put under a black light? Do you even own a black light? When I went looking for a black light yesterday for my science experiment, I was forced to realize what I already assumed: black lights are just not as easily attainable as they were in the '90s. I fear the moment of the black light may have passed. But that doesn’t change that, “Yeah! Science!” is still all around us.

It's the quinine in the tonic water that we can thank for both its unique taste and glow. It's also a fluorescent, and by definition, is an "emission of light by a substance that has absorbed light or other electromagnetic radiation." It doesn't really matter what you combine with tonic water, because the results will always be the same. It's just that fun.

If you do happen to have a black light, then you are in luck. Whether you choose to make just a gin and tonic, or step it up a notch and make tonic water ice cubes so every drink is a glow in the dark party, is your call. Either way, it will make your drinking experience that much more exciting.

Tequila has some pretty interesting properties — so interesting in fact, that it’s been used to make diamonds! Tequila-made diamonds may not be as brag-worthy as what Cartier or Tiffany are selling, but it’s still a fascinating result. (And probably too difficult to achieve at home.) Tequila can also bleach some of your favorite veggies — jalapeños to be exact.

Still confused? Alcohol is actually used as a cleaning agent to remove stains. While most would opt for isopropyl rubbing alcohol when spot cleaning a stain, you could, technically, use tequila, too. (It would just take longer as it has more components in it.) So if you want to bleach your jalapeños, as one does sometimes, you'll need to keep them in tequila longer than than it would take for an alcohol spot-treatment cleaning.

It turns out that tequila, the silver one to be precise, will turn jalapeños a pale yellow. And after an evening (or two) soaking in the tequila, you’ll get one hell of a shot out of it.