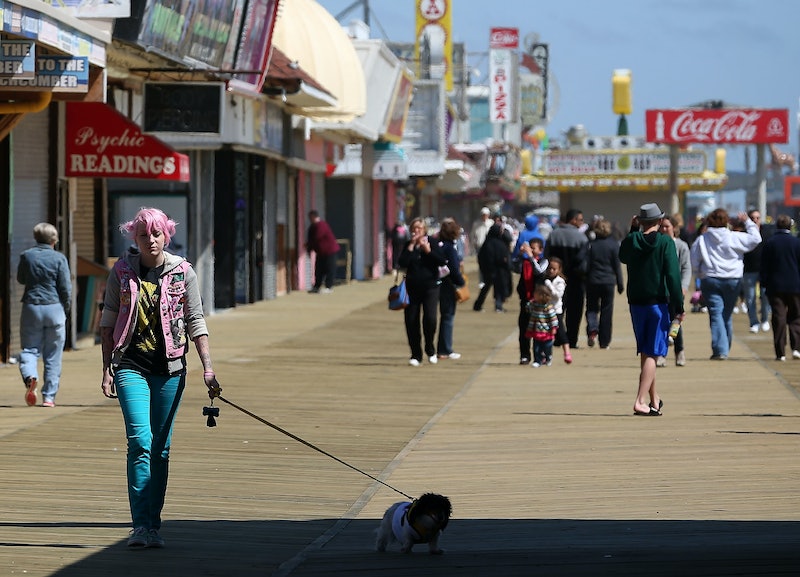 Few things call to mind summer like boardwalks. Caramel corn, cotton candy, ferris wheels, roller coasters, all of it set against the backdrop of the sea: It’s like instant nostalgia therapy. Of course, there’s no reason one has to feel strictly nostalgic about boardwalks (as one has to feel about so many gone-forever things). Boardwalks are still around, after all; and, as it turns out, some of the best have significant staying power. Atlantic City’s first went up in 1870; Coney Island’s, around 1880; Santa Cruz’s, 1907. And though these and other walks have altered significantly in the intervening decades (steel instead of wooden roller coasters; marijuana dispensaries instead of peep shows), they haven’t, in other senses, changed that much at all.

Boardwalks have always been and remain a staple of American summer leisure — what other activity offers so much entertainment in exchange for such a small energy expenditure? Walk down one boardwalk and you might be greeted by one of those life-changing, eminently Instagrammable sunsets; walk down another and you might have your funnel cake swiped by a tattooed-to-death skateboarder or — worse — a trashed soon-to-be-bride. Your experience depends, to an extent, on where you go and what you’re looking for; but, in truth, so much of boardwalking is left up to chance.

Here, we look at the ten best boardwalks in the country, from rural nature walks that look like postcards come to life, to party boulevards that offer junk and thrills in excess. Between California, New York, and even Upper Peninsula Michigan, these are the best boardwalks in America.

Thirty-eight blocks of stores, restaurants, gaming centers, and some 100 rides come together at this award-winning boardwalk in Wildwood, New Jersey. Even National Geographic calls the two-mile walk “one of the kitschiest boardwalks in the country” — and we all know that when it comes to boardwalks (as with almost nothing else) the kitschier the better.

A bold exception to the rule that boardwalks belong next to oceans, the Huron Boardwalk in St. Ignace, Michigan offers visitors stunning views of Lake Huron (which, at 23,000 square miles, might as well be an ocean). The walk connects the city’s downtown shops and restaurants, and includes parks, museums, and historical shipwreck artifacts.

Sandwich Boardwalk adopts a more utilitarian approach to the term “boardwalk,” comprised as it is of, quite simply, boards to walk on. Sound boring? It’s not. Though it exhibits classic New England restraint, the walk takes visitors over a stretch of Cape Cod shore that offers stunning views, facing the shore and towns such as Provincetown and Sandy Neck. A mile from the center of town and amid gorgeous salt marshes, the walk offers a distinctly nature-y experience, with opportunities to birdwatch and canoe.

The boardwalk at Old Orchard Beach in Maine may be small, but it packs enough quaint New England charm to make it an easy addition to our list. The walk, which is really more like a souped-up pier, was first opened in 1898 and has undergone numerous renovations and rebuildings in its more than 100-year history. In its current iteration, it stretches 500 feet and includes a number of shop and restaurants and, at the very end, a nightclub.

Boardwalks tend to be old, if not rickety, affairs, so it’s refreshing to see one that’s brand spankin’ new. Myrtle Beach’s 1.2-mile walk, which took nine months and $6.5 billion to build, was completed in 2010. Lined with palms and charming lamps and affording unbroken views of the South Carolina coast, and the boardwalk plays host to events, festivals, restaurants, shopping, and amusements, making it a central attraction in one of the most popular beach cities on the East Coast.

This half-mile stretch of boardwalk in Santa Cruz is sometimes referred to as “the Coney Island of the West.” That may be, but since this boardwalk is also in California, the beach is even nicer than out East. First built in 1907, it boasts two prized pieces of boardwalk history: The 1911 Looff Carousel and 80 year-old Giant Dipper roller coaster. It’s also got food, games, and newer rides in spades for the non-history-buffs.

Ocean City’s boardwalk is one of the destination city’s premier attractions. National Geographic, which named it one of the best boardwalks in the U.S., says its three-mile stretch is “typically thronged with beachgoers on summer evenings, munching Thrashers French fries (a dousing of vinegar is a must) and queuing up for a spin aboard antique rides, like the Herschel-Spellman carousel built in 1902.” Other attractions include the Life-Saving Station museum, which looks at the history of shipwrecks, and a Ripley’s Believe It Or Not museum.

Don’t go to Venice Beach’s oceanfront walk expecting the same amusements, rides, and family fun you find at other boardwalks. While there’s plenty of food — and, for that matter, plenty of amusement — the area draws a slightly more adult crowd. Skateboarding ramps, tattoo parlors, marijuana dispensaries, graffiti, and impromptu live music come together to give this chunk of Los Angeles’ shore a distinctly alternative and eccentric feel.

Coney Island is perhaps the most culturally significant boardwalk in the United States — references to it in entertainment, from the short stories of O. Henry to Lena Dunham’s Girls, number in the hundreds. But the attraction has more than a claim on our collective nostalgia to its credit. Just this summer, the more than 100 year-old amusement park and boardwalk opened a new roller coaster, Thunderbolt, just down the way from its iconic Cyclone. And if thrills aren’t your thing, rest assured that the boardwalk’s games, venues, beach view, and food — the last of which includes the original Nathan’s Famous Hot Dogs — will keep you entertained.

Bachelorettes, gamblers, and lost-weekenders have been flocking to AC for decades like moths to pink neon. In addition to the casinos, nightclubs, and beaches, the city’s famous boardwalk adds to the city’s appeal. Built in 1870, AC’s boardwalk was the first in the United States. Now, the thing runs some four miles, with restaurants, bars, gaming centers, other attractions fronting views of the Atlantic. Travel writer Malerie Yolen-Cohen writes in the Huffington Post that the walk “varies between honky-tonk, carnival, pub-crawl and natural beauty. You never know what to expect, but people-watching costs absolutely nothing.”

More like this
The 3 Best Heated Steering Wheel Covers
By Margeaux Baulch Klein
Here’s Your Daily Horoscope For January 30, 2023
By Mecca Woods
Here’s Your Astrological Forecast For February
By Nina Kahn
12 Aphrodisiac Desserts To Spice Up Your Valentine’s Day
By Kaitlyn Wylde
Get Even More From Bustle — Sign Up For The Newsletter
From hair trends to relationship advice, our daily newsletter has everything you need to sound like a person who’s on TikTok, even if you aren’t.