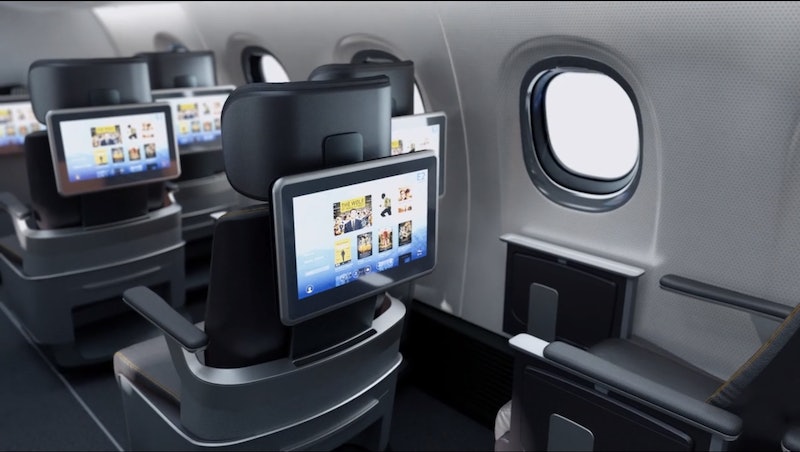 July has been a catastrophic month for flying. A Malaysian airlines flight was shot out of the sky by militia men, a Piper aircraft crash landed on Venice Beach, killing a man and his daughter, and a South African Airways jet experienced such bad turbulence that 20 people were seriously injured. Meanwhile, the mysteries surrounding the downing of Malaysian airlines flight MH370 remain buried somewhere in the Indian Ocean.

While I can't fault you for feeling seriously reluctant about stepping on a plane right now, I can relay an optimistic rumor: airplane cabins might be getting a makeover, should you decide flying is in your future. Designers at Priestmangoode have developed a new cabin layout for the Embraer E2 single-aisle narrow-body jetliner, and their ideas are quite exciting. Say goodbye to the castrophobic seating rows, doll-house-sized cabin storage, and inconvenient overhead control panel.

Much to the relief of your neighbor, this new layout equips you with a smartphone-sized contraption that allows you to control your personal reading light, flight attendant button and personal air-conditioning unit with a remote control. You will no longer have to struggle with the constraints of a seatbelt as you reach across a total stranger to fuss with these various settings.

And it only gets better. Without the bulky personal service unit above your head, more room can be allotted to the cabin storage. Say goodbye to the anxiety you feel when you compete with hundreds of other passengers to stuff your carry-on into the overhead bins. It's a cut throat battle, and losers have their belongings carried off by flight attendants who presumably throw the luggage somewhere into the belly of the plane. With Prestmangoode's design, everybody's a winner.

The most luxurious aspect of the design proposal, however, is the staggered seating, which allots every passenger with more personal space. And just take a look at at those personal entertainment devices! Finally, something that resembles an iPad rather than the world's first television set.

The E2 is set to hit markets in 2018, and we can only hope that more airlines will be inspired to modernize as well.

More like this
The 3 Best Heated Steering Wheel Covers
By Margeaux Baulch Klein
6 Organizations Fighting Police Brutality That You Can Support Right Now
By Syeda Khaula Saad and JR Thorpe
Ashamed Of Your Screen Time Stats? Here's How To Change That
By Alexis Morillo
How To Turn Off TikTok Profile Views So You Can Stalk Other Accounts In Secret
By Alexis Morillo
Get Even More From Bustle — Sign Up For The Newsletter
From hair trends to relationship advice, our daily newsletter has everything you need to sound like a person who’s on TikTok, even if you aren’t.