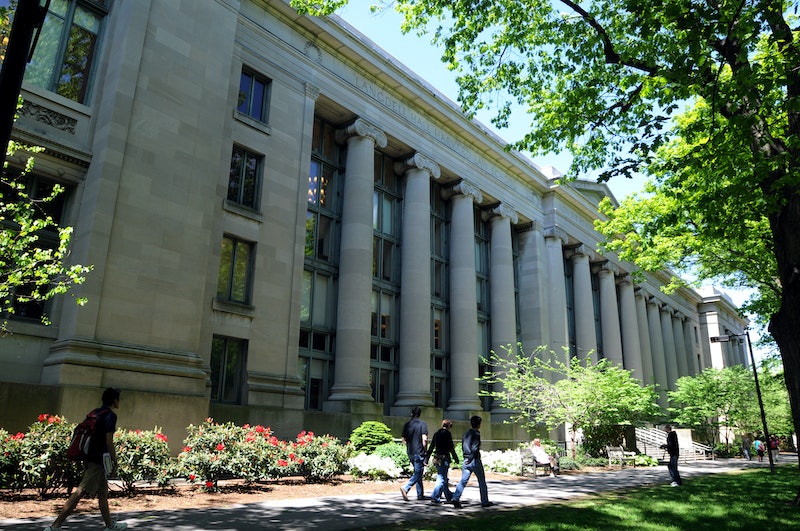 From the first moment you got that acceptance letter, everyone in your life seemed to be talking themselves hoarse about how college will be the best years of your life. Did you feel unchallenged by the coursework in high school work? Well, in college, you'll reach previously undreamed-of intellectual heights! Did you never quite fit in with the cliques? In college, you'll finally find your people, and make friendships that will last the rest of your life! Did you always want to move out of your parents house, and into a tiny room that also has a stranger in it? College will provide the room and the stranger! The sales pitch about the awesome times you'll have at school never quite seems to end, even once you're at your college's front gate.

And some of that stuff is true. You may finally feel socially at ease, or academically challenged, or adequately recognized for your beer pong abilities, or whatever it was that you always longed for during your high school years.

But for every perk in college, there's also a drawback; for every pathway that college opens up in your life, there's also a wall it throws up, leaving you frustrated, confused, and locked out of your dorm room in nothing but a towel. Because while college can be some of the best years of your life, it can also be some of the worst — often at the same time. Here are 17 things that make college the actual worst.

Sharing a 20 foot long above-ground tomb — sorry, I meant “suite” — with an arbitrarily selected human being whose terrible music, creepy dates, and sleep farts you are expected to tolerate for nine straight months? Sure! I mean, what are the odds of that not working out?

2. CLASSMATES WHO LOVE TO MONOPOLIZE DISCUSSIONS

This person who spends 9/10s of every class telling your professor how this reading reminds him of this thing that happened to him once at summer camp — what is his end game? Is he trying to kiss ass for a better grade? Or subtly figure out what the reading was because he didn't do it? Is he simply in love with the sound of his own lips, gently slapping against each other, as they over-enunciate “Emmanuel Kant”? You'll never know (although that is about the only aspect of this blowhard's life that you won't know about by the end of the semester).

3. YOUR FRIENDS FROM FRESHMAN ORIENTATION

Some of these panic-about-being-away-from-home-for-the-first-time-induced friendships that crop up over the course of freshman orientation will be the real thing, and will last long after college is over. And some others will be over by the first week of classes. But what will never be over is the awkward feeling, deep in the pit of your very soul, every time you run into your old orientation BFF, whom you have not spoken to since the day after classes started. Bonus points if you got some ill-considered matching orientation tattoos that you now have to explain to your real friends.

Yeah, I’d say those 60-odd bowls of Lucky Charms you had this semester added up to about a $4,000 value, right?

5. IF YOU GO TO A BIG SCHOOL IN THE CITY: TOO MUCH ANONYMITY

The lack of any clearly delineated campus space makes it nearly impossible to tell a winsome fellow student doing some improvisational street theater from a random guy freaking out on mushrooms who decided to go sit in your library vestibule.

6. IF YOU GO TO A SMALL SCHOOL IN THE CITY: NO COMMUNITY

Why would anyone bother joining extracurriculars or meeting their dorm-mates when they can just go into the city and hit some clubs and see if they accidentally end up meeting Orlando Bloom or something?

7. IF YOU GO TO A BIG SCHOOL IN THE COUNTRY: BOREDOM

Oh, I’m not talking about suffering through your own boredom. I’m talking about suffering through what happens when 2,000 college freshmen simultaneously realize that they’re a 40-minute drive from even that one weird mall that doesn't even have an Auntie Anne's and closes at 6 p.m., so they have to make their own fun. If you're lucky, this fun will only involve horse-mounted police officers breaking things up, like, half the time.

8. IF YOU GO TO A SMALL SCHOOL IN THE COUNTRY: DRAMA

Since there are only about 17 of you up in this picturesque college, everyone is going to have already dated everyone else within your first semester there. Because of this, you are now set up for three-and-a-half-years of near-constant gossip, side eye, and people randomly bursting into tears and running out of the library.

9. OK, FINE, THERE'S DRAMA EVERYWHERE, NO MATTER WHERE YOU GO TO SCHOOL

Why did you make a pass at Sara's boyfriend? Well, why did you use Tyler's wash cloth? OK then, why did the both of you steal Dan's ice cream from the lounge fridge, when you knew he was specifically saving it for later? Why did you let Kara do shots at that party until she barfed Sour Apple Pucker all over her blouse, which she borrowed from Andrea? Why did someone report all of you to the RA for yelling during community quiet hours? WHY??!!

10. PEOPLE WHO BLAST MUSIC OUT THEIR DORM WINDOWS ONTO THE QUAD

Is it a secret rave, or is it some jerk-off who thinks the world wants — nay, needs — to hear their rare 27-minute Avicii remix played at consciousness-scrambling volume? Does it even matter?

11. PEOPLE WHO PLAY GUITAR ON THE QUAD

The outdoor humidity isn’t even good for the strings on that thing, OK? Take it inside, buddy!

12. PEOPLE WHO HAVE SEX IN THE DORM SHOWER NEXT TO YOU

While you are showering. At a time of day that is reasonable for showers, but not reasonable for super-public sex. You’ll be able to tell who it is by the flip-flops peeking out under the shower stall, too, thus adding yet another person to the rapidly-growing list of individuals that you can’t look in the eye anymore.

13. PEOPLE WHO HAVE THEIR BOYFRIEND FROM HOME MOVE INTO THE DORM LOUNGE

I am not saying he will also be roughly 35 years old and have a job selling chicken on a stick at the Renaissance faire, but I am also not not saying that

How did all of your friends get these cool, important internships where they’re teaching children how to read, or writing for awesome websites, or negotiating U.N. peace treaties, while you somehow got stuck alphabetizing filing cabinets in a storage room located a good 60 feet away from anyone who could even theoretically get you a job after graduation?

No matter how smart, studious, or suck up-y you are, you will eventually come across a professor so broken, so tired, so sick of teaching To The Lighthouse to a bunch of hungover 19-year-olds dicking around on their smartphones, that they have completely given up, and will neither engage with you intellectually nor cut you a break.

17. EVERYONE IS OFF LIMITS

By senior year (possibly junior year, if you’re especially frisky and/ or bored), everyone is either an ex, or a friend of an ex, or an ex of a friend, or that weird guy currently in his ninth year of undergrad.

18. THE PERSISTENT WORRY THAT YOU'RE DOING IT ALL WRONG

Sometimes, it seems like everyone at your school has had a life-altering humanitarian experience abroad, or a life-altering spiritual experience in a monastery, or a life-altering spiritual experience at a Phish concert, that puts your own personal evolution to shame. You’ll spend a lot of time wondering if there’s something wrong with you because you’re still pretty much the same person you were when you showed up. But you shouldn't. College is changing you and helping you grow all the time, even when it seems like nothing but a four-year excuse to wear pajama pants outdoors. Don't worry — whatever you're doing, you're doing it right.