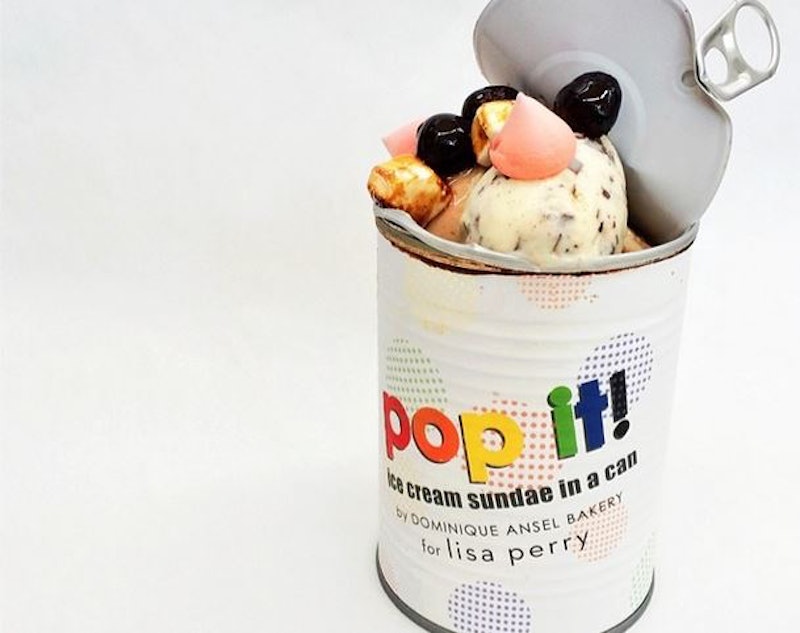 Because apparently all food has to have a gimmick now (hi there, peach butts!), cronut creator Dominique Ansel has just put a new twist on an old summer favorite: Ice cream sundaes… in a can. They’re called “Pop It!,” and they can be yours for one day only — as long as you are in a very specific place at a very specific time.

A collaboration with designer Lisa Perry, these canned treats will be making their one and only appearance this summer on Saturday, August 2 (that’s tomorrow, you guys) in the Hamptons. Bright and early Saturday morning, a “pop up ice cream truck” will be loaded up with 500 sundaes; it will park in front of Perry’s boutique, located at 67 Main Street in East Hampton, NY, starting at noon for a day of deliciousness. Said Perry to WWD, “Dominique was a perfect match for this collaboration, as both of our brands celebrate art, pop culture, and fun. He infuses each of his confections with creativity and imagination and the end result is always a treat in more ways than one.”

I’m not totally sure why they’re bothering to call the truck a “pop up truck” — aren’t ice cream trucks inherently pop up? The whole point is that they can travel around with their treats, right? — but that aside, these things look pretty impressive. Inspired by root beer floats, they feature root beer and stracciatella ice creams, mascarpone semifreddo, macerated cherries, honey-flavored marshmallows, and cute little cherry meringues; then they’re sealed in a chocolate-lined soup can — a nod to Andy Warhol — and frozen. At $15 bucks a pop (see what we did there?), they aren’t cheap, but apparently they’re huge — big enough for two people. Even better, 20 percent of the proceeds will go to the charity City Harvest. Worth it? Maybe. For the curious, the truck will look a little something like this:

Ansel spoke about the challenges of sticking an ice cream sundae in a can to the New York Post: “A regular sundae has a mix of textures because you’re assembling it to order, so some elements are frozen and some are not,” he said. “But when you build a sundae in a can, the trick is to think of things that, when frozen, maintain a distinctly different texture. The root beer ice cream for example, is a little firmer and creamier than the mascarpone semifreddo, which is airy like whipped cream.” He continued, “And I wanted to add in chewy toasted marshmallows and also some crunch from meringues to really liven up the texture. We also lined the inside of the can with chocolate just to keep everything from touching the can itself,” he added.

One thing’s for sure: This isn’t the ice cream truck of our childhood. You’ll have to be fast to snap a “Pop It!” sundae up, though, because only a limited quantity will be available. If anyone manages to snag one, do let us know — we’d love to hear what they taste like.

Now if you'll excuse me, I have some DIY ice cream toppings to whip up. If I can't get a sundae in a can, I may as well make one in a bowl myself.