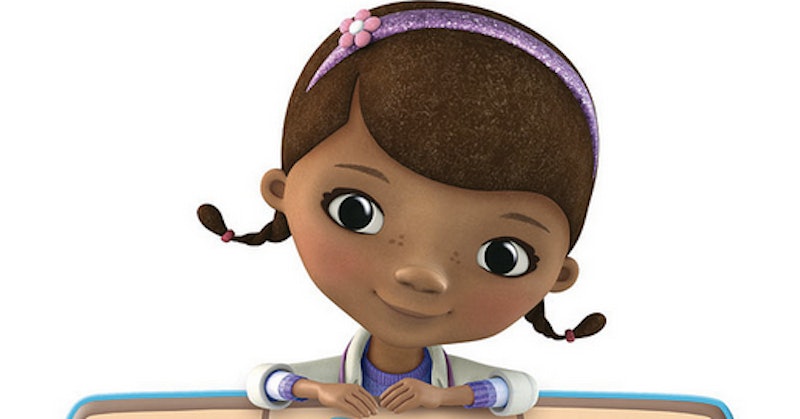 Barbie, in all of her blonde, proportionally skewed glory, has dominated the dolls-for-little-girls market across America for just over half a century now. But as she enters her 50s, Barbie’s real estate on the shelves of American toy stores is finally facing competition. Her opponent? The Doc McStuffins Doll, an African-American doll based off the children’s television series about a six-year-old girl who operates on her friends with the help of her fellow stuffed animals.

Doc McStuffins merchandise amassed $500 million in sales last year, setting a record for the best-selling toy based on an African American character, the New York Times reports. Though Mattel has gone to great lengths to reassert Barbie’s leadership — most notably in their recent introduction of Entrepreneur Barbie — little girls across America are increasingly finding Doc McStuffins, with her modest braids, white lab coat, and pink stethoscope, more relatable.

The changing demographic of America is fueling this trend. Nearly 50 percent of all newborn babies were of racial or ethnic minorities in 2012. Little girls want to play with dolls that look like them, and the industry is finally responding to this demand.

Margaret Beale Spencer, a professor of comparative human development at the University of Chicago, paraphrased the significance behind McStuffins’ success beautifully.

“Children’s play is serious business,” Dr. Spencer told the New York Times. “They are getting ideas about who they are from these objects. There are messages about one’s confidence, one’s sense of self in terms of what I look like and being powerful.”

Though Doc McStuffins is African-American, Dr. Spencer believes the doll's universal appeal is what makes her so popular.

In the meantime, it looks like Barbie is long overdue for a checkup — if she's lucky, McStuffins might squeeze her in for an appointment.

More like this
Flip Phones Are Gen Z's Favorite New Nightlife Accessory
By Maria Santa Poggi
Andie From 'How To Lose A Guy In 10 Days' Is A Total Gemini
By Nina Kahn
25 Inspiring Quotes From Black Women To Celebrate Black History Month
By Kyli Rodriguez-Cayro and JR Thorpe
Ashton Kutcher Wants Danny Masterson “To Be Found Innocent” In Rape Retrial
By Jake Viswanath
Get Even More From Bustle — Sign Up For The Newsletter
From hair trends to relationship advice, our daily newsletter has everything you need to sound like a person who’s on TikTok, even if you aren’t.