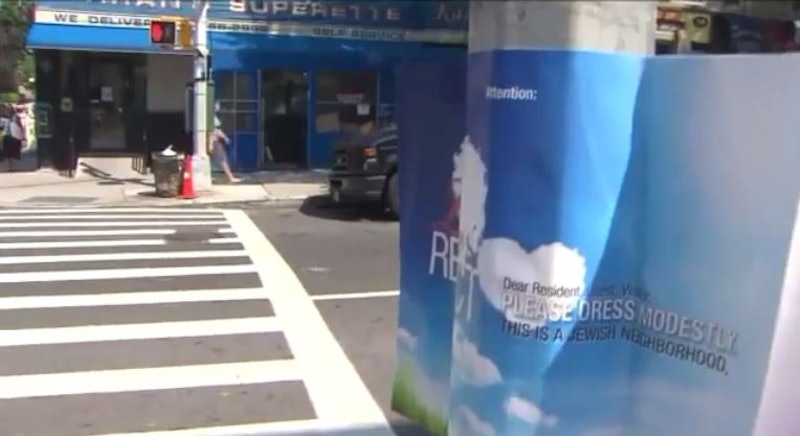 How would you react to a sign on a street dictating exactly what you’re allowed to wear? If you’re anything like most of the Internet, not well. Here’s the deal: Signs have begun popping up in the Crown Heights neighborhood of Brooklyn requesting that any and all people present cover up. “Dear resident, guest, visitor,” the signs read. “PLEASE DRESS MODESTLY. This is a Jewish neighborhood.” They don’t specifically single out women, but it's pretty clear that women are their target audience. They also don’t appear to be affiliated with any temple or Orthodox organization.

Reactions, as you might expect, have been mixed. One rabbi agreed with them, telling PIX11, “A woman should cover up, she doesn’t have to display what she’s got”; meanwhile, an Orthodox woman named Elisheva Schwartz told the news outlet that the signs offended her. “I think it is very important we don’t inflict our views on everyone,” she said, citing Brooklyn’s diversity as one of the qualities that makes the borough so terrific. A good deal of the Internet is up in arms, though; for example, a number of members of a Crown Heights Facebook group (via CrownHeights.info) have commented on the group’s timeline: “‘This is a Jewish Neighborhood’ is claiming ownership and exclusion to others… It is discriminatory,” wrote one; said another, “The issue with the signs, is that they do no good. It’s not as if anyone is going to change the way they dress because of a sign. Instead, it makes the entire community come off as self-absorbed and arrogant”; “These signs are offensive and rude in any neighborhood,” wrote a third.

I’ll be honest: I fall on the side of the offended. The problem here isn’t the religious belief that women should cover up; it’s that the creators of the signs are pushing that belief on other people. Crown Heights resident Alexa Antapol writing into Failed Messiah about the signs noted, “Signs printed with demeaning and insulting subtext that my ‘immodest’ attire is offensive to a particular group to which I do not belong are offensive to me.” This? Is it in a nutshell. As New Yorker Jake Dobkin speaking to Gothamist said, “If you want people to dress a certain way in your temple, or in your bakery, you can ask, because that’s a more private space.” But on the street? No way. As long as I’m not barging into anyone’s home and shoving my scantily-clad heathenness in their face, no one has any right to tell me what to wear. End of story.

At least, as Dobkin continued, the signs are protected by free speech — which means we’re “free to ignore them.” And that’s exactly what I’m going to do. It’s effing hot out. I will wear shorts and sleeveless shirts even if a sign tries to convince me to do otherwise.