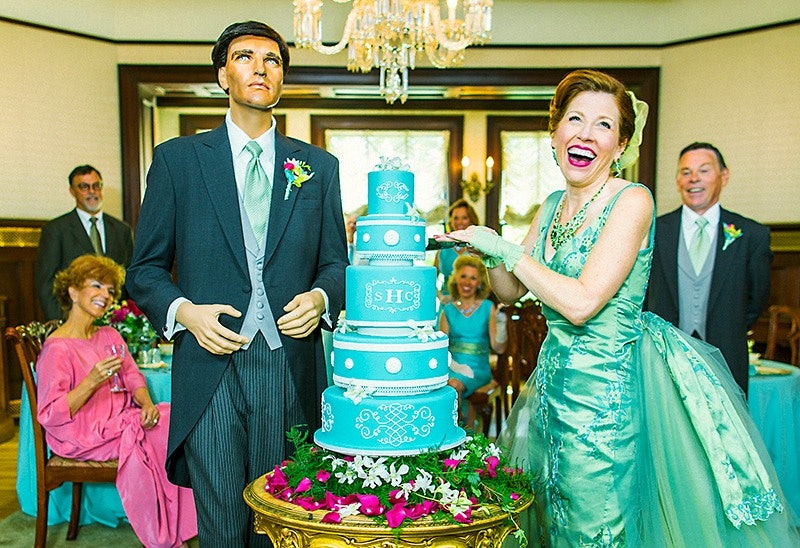 Remember photographer Suzanne Heintz and her “Life Once Removed” series? Well, her mannequin family is back, and this time, she and her stone-faced husband Chauncey, have renewed their vows — with a little help from their daughter, Mary Margaret, and all their loved ones. And what a celebration it was! Although it’s only recently that their not-so-perfect plastic family has jumped into the spotlight, they’ve been together for a whopping 14 years. During that time, they’ve constantly challenged tradition, expectations, stereotypes, sexism, and the notion of “settling down” — along with a whole lot more.

Since last we saw Heintz, Chauncey, and Mary Margaret, "Life Once Removed" has grown considerably. The original photo series gave birth to the Playing House Project, which encompasses not only photographs, but also film shorts, a feature length documentary, and a book. Interestingly, Heintz actually left her mannequins in France last year after shooting their Paris vacation. It was going to be monstrously expensive to ship them back to the U.S., so in Europe they stayed; nor did she make it a priority to go out and replace them. “I was tired of all the effort and strain,” she told 22 Words. “I thought, ‘Maybe this is enough. How can I say anything more than I’ve already said with this project?’” She took a six-month break from photography while she worked on the film. During this time, the photo series went viral — “So,” Heintz said, “I decided to Renew the Vows, both literally figuratively.”

The photos, of course, are glorious. Mary Margaret helped Heintz get ready for her big day:

She and Chauncey said their “I dos” (again):

They walked down the aisle together:

And, of course, they ate cake:

All while poking fun at, and commenting deeply upon, marriage as an institution, the wedding industry, and everything that goes along with it. And according to Heintz, the story doesn’t end there, either. The second chapter for the “Playing House” film, which focuses on the vows, is on its way; and after that, there are plans for a third installment centered around Mary Margaret called “Playing House: The Next Generation.” I don’t know about you, but I can’t wait to see all the good things to come.

What’s the point of the project? As Heintz writes on the Playing House Project website, “CHANGE. To change the misperceptions and feelings which trap us in feeling less than, insufficient, dissatisfied with the state of our lives, and desperately grasping for things out of reach to fix it.” And as polarizing as some responses have been to it, I think it’s safe to say that it’s a resounding success. Sure, there are naysayers; but Heintz told 22 Words, “Overall, what makes this experience as great as sitting in a hot spring is all of the letters people send me about how what I’ve done has deeply affected them. They tell me about how they now perceive their lives and themselves in terms of success and pride, instead of feeling like a freak and a failure. I’ve even heard from people who told me they saw my work and it gave them enough courage to say, ‘To heck with social norms, it’s time to come out of the closet!’”

Check out the trailer for the “Playing House” film below: