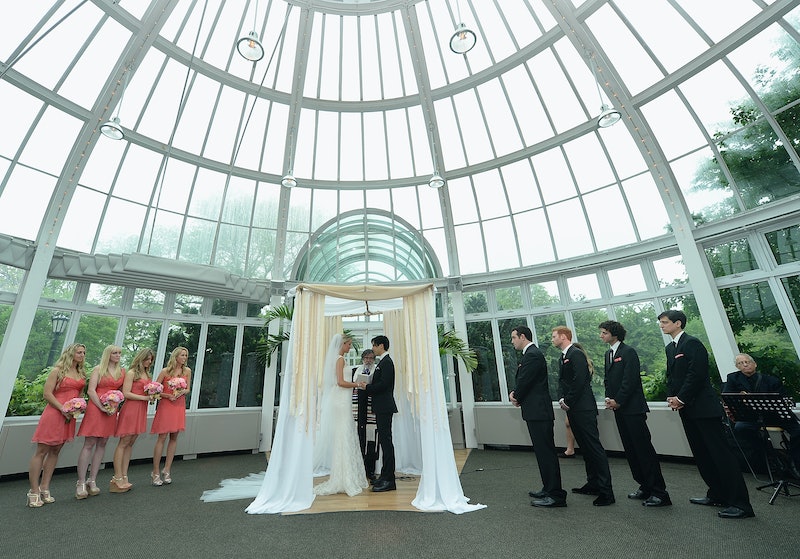 I’m pretty sure I’m not alone when I say that all those quizzes and widgets telling me that I should have gotten married by now bug the heck out of me — but hey, guess what? They’re all wrong anyway. According to a new Urban Institute study, Millennials as a whole are staying single for significantly longer than previous generations did. And call me crazy, but I don’t think that’s such a bad thing.

The study looked first at marriage rates for older generations; then it projected the trends for younger ones. Here’s what they found:

Here, I made you a meme:

So that’s the “what”; the “why,” though isn’t quite so simple. A big part of it is undoubtedly due to the economy; crippling student debt combined with a terrible job market and low-paying positions mean that a lot of people are holding off on marriage until they’re financially sound. The Urban Institute states that education also factors in: They project that those without a four-year college degree will have a significantly steeper decrease in marriage — 62.8 percent for women and 59.2 percent for men, as opposed to 78.7 percent for women with a four-year degree and 77.6 percent for men.

But then there’s also this: A recent Pew poll found that honestly, a lot of Millennials just don’t see the point of getting married. According to AlterNet, the poll asked adults aged 18 and older their feelings on marriage and having children. 61 percent of respondents over the age of 65 answered a question about whether it’s in society’s best interest to prioritize marriage and having families in the affirmative; the number of “yes” answers dropped for each successive age group, though, with only 29 percent of Millennials agreeing. The results of the Pew poll suggest that the declining marriage numbers found by the Urban Institute study might be chalked up to the fact that many Millennials view marriage as obsolete. A committed, long-term, happy, and healthy relationship doesn’t require marriage to work, and with all of the other things playing against us right now, the school of thought that seems to be evolving from it all says, why bother?

The trick, of course, will be in how society juggles married couples and singles in a world with a population that favors singledom over coupledom. As the Urban Institute concludes, “Marital status directly affects policies and programs such as tax rates, eligibility for entitlement programs, and the availability of social safety nets.” A growing single population will change everything from the needs of the programs available and the costs required to carry them off. The times, they are a-changin’ — but with a little bit of luck and planning, maybe we can evolve with them enough to make it all work.

More like this
Androgynous Formal Wear That Will Make You Feel *So* Fancy
By Megan Lasher
The Spiritual Meaning Of Angel Number 000, Explained
By Kristine Fellizar
Twitter Has So Many Thoughts About ‘Don’t Worry Darling’ After Its Release
By Stephanie Topacio Long
It's A Pleasure #53: Help! My Boyfriend Won't Tell Me Why He Stopped Going Down On Me
By Sophia Benoit
Get Even More From Bustle — Sign Up For The Newsletter