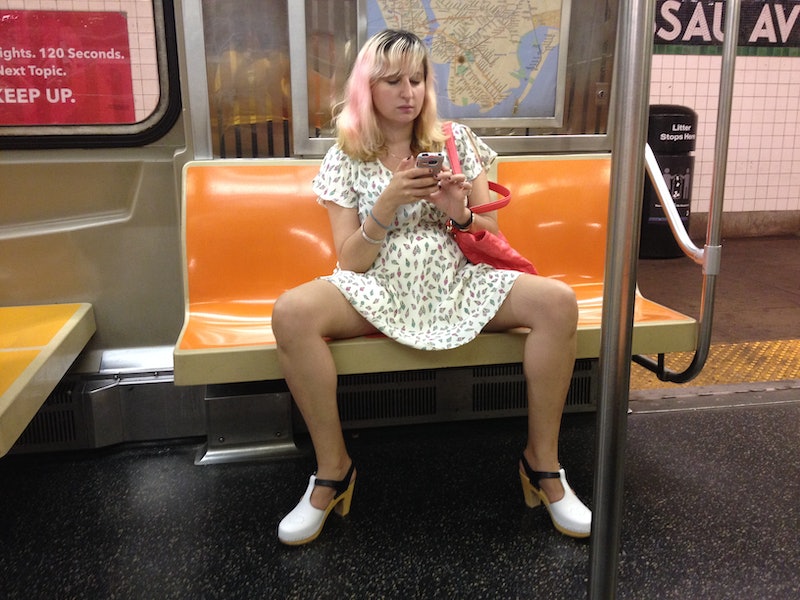 There are only a few sure things we can count on in this crazy, ever-changing world: The moon's regal orbit around the earth. The gentle change of the seasons. And the fact that, on any given subway car, there will be at least one man with his legs spread across multiple seats.

A problem as frustrating as it is mysterious, the man who takes up multiple seats on public transit with his splayed-out legs inspires all sorts of questions among his fellow riders: Is the leg-spreader exercising his male privilege, or, as some defenders would have you believe, merely attending to the unique spatial requirements of his balls? Is he blocking off empty seats to his left and his right with his knees out of obliviousness, or passive-aggressive malice?

I'm certainly not the first to spill digital ink addressing the phenomenon — men taking up too much room on crowded trains has been the focus of a Turkish feminist Twitter campaign; the subject matter of the Tumblr Men Taking Up Too Much Space on the Train that attracted viral attention last year, with one user even catching a picture of the King of the North, Games of Thrones actor Richard Madden, in the act; and the inspiration behind another particularly awesome Tumblr, Saving Room for Cats.

And yet, despite all that scrutiny, I found that I still had questions about the dudes I saw stretching out daily, luxuriating on pee-smelling rush-hour trains as if they were fine European spas. Did it actually feel good to stretch out like that? Physically? Emotionally? Would it feel good if I did it? Would people be angry that a woman was slouched and spreading? Would I even care? Would there, in fact, be room for cats?

I decided, for the length of one weekend, to become a slouch-and-spreader. To truly understand the phenomenon, I decided I'd act like the worst examples I had encountered in my own commuting life: I wouldn't budge for a knee nudge or exasperated expression. I would hold my ground. I would embody the worst of slouch-and-spread assholery to the letter. I would try very hard to imagine that I had balls, and that those balls were desperate for air. And by the end of the weekend, I hoped to understand what made the slouch-and-spreaders slouch and spread.

The weekend began quietly, as I picked a near-empty train to warm up on. My practice session turned into the real thing quickly, however, as a woman made her way over to sit next to me in a two-seater. She gave the same knee nudge I had given countless spreaders before, and for a moment, I automatically reacted, pulling my legs in. Then, I remembered my important/horrible experiment, and kept them splayed out. My seat-mate, realizing she wasn't going to get anywhere with nudges, proceeded to ride the corner of her seat, as I myself had so many times, while I pretended to be absorbed in a game of Candy Crush.

I felt like such a dick that I ran off the the train the second I hit my stop. But as I ran, I was surprised to realize that, for all her obvious discomfort (communicated via a few side-eye glances), my seat-mate didn't say anything. I had thought that maybe, since I was a woman and not physically threatening, people would feel freer to tell me to move it on down. But she, as I had also done so many times before when I was in her shoes, realized that she was dealing with an asshole at best, and a maniac at worst, and so decided to cut her losses rather than end her day with a possible subway confrontation.

This set the tone for the rest of my weekend. Of course, there were a few exceptions: One woman, roughly my age, full-on confronted me, standing angrily in front of the seat I was blocking while gesticulating with a large Frappuccino. (I immediately caved and moved.)

But mostly, the communication was nonverbal. Two other women and one man gave me tiny exasperated glances that I only caught out of the corner of my eye. I encountered one devoted slouch-and-spreader who was already sitting on a bench seat when I entered the train, and when I tried to fight him for space by slouching and spreading against his body as hard as I could, I lost, got uncomfortably squished between him and another man, and ended my ride standing up.

But of the 20 or so folks that I sat next to, most of them, male and female alike, just quietly tried to fit themselves around my body without saying a word or expressing any clear frustration. Though most of the women pulled their bodies inward and away from me for the entire ride, a few of the men slipped into the seat next to me with a pulled-together body posture, before trying to spread their legs out into my space once they were anchored in a seat. (I won those battles, by the way.)

Why weren't men and women alike calling me out when I slouched and spread? It took me a few rides to realize that it was because people were afraid that I might be crazy.

Of course, this isn't news. Everyone who rides public transit is afraid that everyone else who rides public transit is insane. Not just because the statistics and news stories show that the public transit system is a wild, dangerous experience for everyone, including men; but also because to have taken a city bus after sundown is to have lived with the fear that some maniac is going to quietly steal a piece of your hair. It's an experience that tends to make you want to err on the side of letting things slide.

As a rather large man eyed me nervously rather than asking me to move, I realized that I had become this suspected maniac. It felt bad. I was starting to feel like a seriously terrible person.

In other words, I became unconscious of my own manufactured privilege. As people viewed my leg spread as an act of aggression and possible instability and steered clear of me, I slowly began to stop even noticing them.

For the first time in my subway-riding life, I stopped worrying if someone was going to call me a bitch if I took up too much room. I didn't feel powerful, per se. I just felt...relaxed. Was this what those leg-spreading men felt like all the time, I wondered? Relaxed, confident, cocky? I had always thought that there was no way those leg-spreaders could have "not noticed" the people who wanted to sit down. But as I relaxed into my ninth or tenth slouch-and-spread of the day, I realized that I neither knew nor cared who wanted to sit down.

I now believe that some of those men I had raged against had probably genuinely not noticed how much space they were taking up. That's the thing about privilege: It can be mighty blind.

If I had hit that point of purposeful obliviousness after just 72 hours of acting weird on the subway, I couldn't even imagine how much the fear of your fellow riders, combined with a lifelong shot of male privilege, would allow you to block out.

By the end of the weekend, I felt immensely confident, and also profoundly ashamed. I was horrified at myself for having capitalized on the very terror of aggressive strangers on the subway that I myself had felt so many times. But God, it was so easy to act like a dick on the subway! How could we possibly get people to stop slouch-and-spreading when it was this easy to do and this scary to stand up against?

If people were afraid to call me out on the subway, then urging people to potentially risk life and limb confronting slouch-and-spreaders on their own isn't the answer. To make any progress on this issue, we can't demand that individuals take the lead themselves — we need a public shaming campaign undertaken by the transit system itself. Technically, taking up multiple seats can already net you a $50 fine in New York City (though I've never personally seen one given). So why doesn't the city create some subway ads to let us know?

The anti-sexual harassment campaign launched by both the Boston and NYC MTA in 2008 could provide a model. The campaign took a behavior that most riders already felt was taboo — and which already carried legal penalties — and emphasized how it would not be tolerated on the transit system, with large ads on trains, making it impossible to claim ignorance. Boston's program was a massive success and resulted in a 74 percent increase in the reporting of on-board gropings.

Of course, taking up more than one seat is not the same thing as sexual assault. But while critics of anti-slouch-and-spread blogs claim that stopping slouchers is a frivolous issue, I'd argue that it's symbolically very important: Public transit, like all public spaces, is a cultural battleground, and what goes on there sets the tone for the cultural standards at play in the rest of our lives. It's worth it to make that space as welcoming and comfortable as possible for all people.

As I commuted into work on Monday post-experiment, I looked at the handful of men slouched-and-spread on my train. After my weekend of spreading, I felt like I better understood how these guys take up extra space on the train, but I was still at a loss for what to do when they did it. Should I roll up on them and say, "Listen, buddy, I know how fun this feels, but ya gotta stop being a dick"? Should I sit down next to them and try to squeeze them into their own seats?

In the end, I'm sorry to say I stood silently.