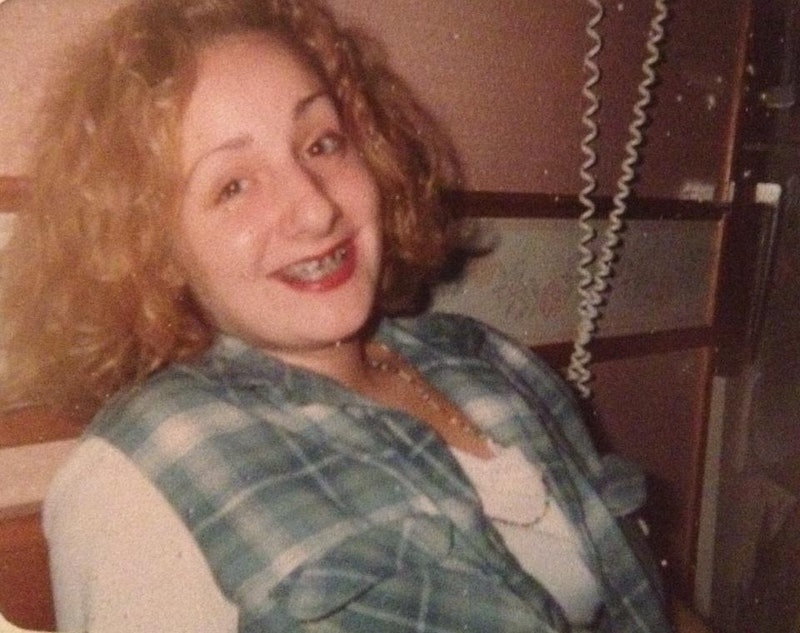 It was the first day of my freshman year in high school. The first day is always the worst, but that day, I got lucky: When it came time for lunch, I had three friends I already knew to sit with. We talked about our classes, and I told them about this boy I had seen with purple hair who would become my crush for most of my high school career.

Partway through my regaling, a kid came over to the table, placed his palms flat against it, and leaned into my face. “What’s up, Beaker?” he asked. I had never seen him before and was pretty sure he wasn’t in my grade. It didn't seem to matter. He then went around the table and gave each one of us a nickname. My best friend got the oh-so original moniker “Red” because of her red hair, and the other two girls, whose names I’ve actually forgotten, got equally neutral nicknames. I didn’t fare so well. I was Beaker because, as he explained, “You have a big, ugly nose.”

“Hey, Beaker!” I heard someone say. “I’ve missed your big, ugly nose at lunch!” Crushed and embarrassed, I darted into the closest bathroom and cried in the stall.

I was well aware of my nose. I have my father’s nose, and it is big. It’s big, it’s French, and for most of my life I had wanted to “fix” it. I strongly believed that in fixing it, I could erase every problem that ever plagued me and be the person I always wanted to be. I even thought that my depression would miraculously go away, with just a few slices and dices of my face. My obsession and insecurity with my nose ran deep.

When the bully walked away from the table, I started to cry. My biggest insecurity had been pointed out to me on my first day of high school, and I saw it as a bad omen. When I got home that night, I hoped that I would never see him again, and that he just had to get some sort of first-day bullying out of his system. But that was just the beginning.

Almost every day of that semester, my bully, Keith, would come to whatever table we were at and harass us — well, me, specifically. I wasn’t just Beaker, with the “big, ugly nose,” but my whole face was ugly, my hair was frizzy, and I had an ugly laugh (“ugly” was his really original go-to adjective). He was a man obsessed.

A few weeks into the semester, his friends joined in on the “fun.” Again, even with them, it was me who got the brunt of it. There was something about me — my looks, my wardrobe, the way I talked and walked, that made me an easy target for them. I had dealt with some bullying when I first moved to New Hampshire from Massachusetts in second grade, but when my mother stepped in and had a meeting with the principal, it stopped.

Although my parents knew what I was enduring, I begged them not to contact the principal this time around. I was in high school. I was just going to have to deal, and become used to the physical turmoil that twisted in my stomach each day before lunch. I was going to have to ignore the dry-heaving and occasional vomiting that the nervousness about each lunch period induced. It would pass, I kept reminding myself. It would pass.

When the semester came to an end, and I was able to shift my schedule around, I did. I may not have been able to sit with Cortney anymore, but anything was better than having lunch with my tormentor Keith and his cronies.

Then one day, when I was walking in the hallway to class, I felt a hard kick to my ass. I ignored it, assuming it was an accident. But then I got it again, even harder, so hard that I tripped and had to catch myself from falling. “Hey, Beaker!” I heard someone say. “I’ve missed your big, ugly nose at lunch!” Crushed and embarrassed, I darted into the closest bathroom and cried in the stall.

Although it was never as persistent as it was that first year, until Keith finally graduated, I would have to endure some sort of bullying from him at least once a week. By my junior year (his senior year), he had started dating one of my sister’s friends, and now, consumed with her, he definitely laid off quite a bit. But still, just when I thought he was gone for good, because an entire three weeks had passed without a kick to the ass, a push in the hallway, or remark about my “ugly” looks, he’d pop back up, and what strength I had grown in his absence would be demolished in seconds.

Bullying is nothing new, but cyber bullying is perhaps even more vicious. I’m somewhat grateful that my bullying came in the form that it did, as opposed to the method that bullies use today. These days, when strangers bully me online for things I've written, my skin is thick enough that I can laugh those bullies off. But others have yet to grow that thick skin.

When I read that Secret, an app that allows you to share, well, secrets, has been accused of putting money before bully prevention, I wish I could say I was surprised. Despite multiple warnings from Christine Lu, an advocate for mental health issues pertaining to teens, about the potential for cyber bullying resulting from use of the app, Secret founder David Byttow continues to turn a blind eye. In an email thread between Lu and Byttow, Lu offered to help them keep Secret from becoming just another vehicle for bullying. His response includes a very disturbing comment from Byttow: “Suicide prevention is something we take very seriously, yet as a society still know surprisingly little about.”

Is that supposed to be some sort of sick joke? It doesn’t take a brain surgeon to figure out the detrimental effects of bullying, especially anonymous bullying through the Internet. If you’re going to market something to a vulnerable age group like adolescents, then you have to take into consideration the repercussions that could come from that creation.

With awareness and education, we can help fight the bullying epidemic. No, perhaps we can't beat it, but we can fight to keep those victims of bullying from succumbing to an end that no one should. It’s easy to say, “Ignore them,” “Be the bigger person,” or “Just walk away,” but when you’re 13 and your hormones are crazy enough as it, being told you have a “big, ugly nose,” every single day really is the end of the world.

Collectively, whether we’re the founders of a new form of social media, a friend, a family member, or someone who has a story to share, we owe it to the victims of bullying to speak out and tell them that yes, it does get better.