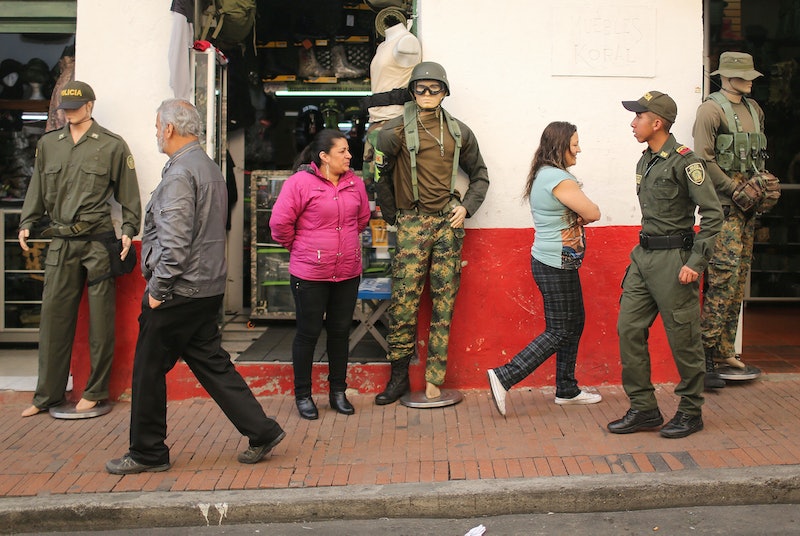 The newest team of undercover operatives to hit the headlines isn't the subject of the next James Patterson novel. It hasn't been assembled for some nefarious, politically charged purpose, and although the operatives are on the lookout for public safety, they aren't the stars of a new superhero series. A new task force in Bogotá, Colombia, has an even more kickass purpose: keeping women from getting assaulted on the city's public transportation system. Seven of the 11 officers are women.

Underwhelmed? You shouldn't be. In many Latin American cities, street harassment plagues women who venture out in public to an even greater extent than the rest of the world. (Although it is a problem everywhere — see the "Sidewalk Sleazebags and Metro Molesters" video for more info.) The problem is particularly bad in Bogotá, where four women were assaulted this past week alone. Hollaback!, an organization dedicated to ending street harassment in public spaces by crowd-sourcing the conversation, interviewed a Bogotá-area Holla group last year, and its answers are illuminating. Marcela, Nathalie, and Maria, the Bogotá Holla's administrators, wrote:

Therefore, it's hardly a surprise that over 60 percent of women are sexually harassed or assaulted while riding the Transmilenio. "Ya uno no se puede venir en falda ni nada porque los hombres nunca han visto unas piernas," or You can't get on wearing a skirt or anything because these men have never seen [a woman's] legs, one victim of inappropriate touching sarcastically told Noticias RCN.

Luckily, the city of Bogotá is taking action. Its law enforcement branch created a team of 11 operatives who will be armed with Tasers and specially trained in recognizing and stopping sexual assault. Seven of the agents are female. Bogotá has a population of over 7,600,000, so that's about 690,909 people per agent, but it's a start. The very presence of the team could serve as a deterrent to repeat offenders.

This is kind of what I imagine they'll look like as they confront street harassers.

This isn't the first time Bogotá has tried to confront public transportation harassment in 2014. In March, it premiered a "pink bus" system, which featured women-only bus carriages. Such systems have met with resounding success in nations like India, where trains that only admit female passengers have begun to spring up. However, the tactic didn't work out so well in Bogotá, where many deemed it sexist. (And for good reason: to me, it smacks of gender-based segregation, as well as attacking the symptom rather than the problem.)

So we'll wait with bated breath to see how this idea plays out. If it works, perhaps other cities across the globe could take note. If not, there are always Cards Against Harassment.

More like this
Black Women's Equal Pay Day Highlights An Upsetting Problem
By Brandi Neal
Women Around The World Are Cutting Their Hair In Solidarity With Mahsa Amini
By Darshita Goyal
Chris Kaba's Family Continue Fight For Justice After Viewing Police Bodycam Footage
By Sophie McEvoy
Here’s Your Daily Horoscope For September 27, 2022
By Mecca Woods
Get Even More From Bustle — Sign Up For The Newsletter