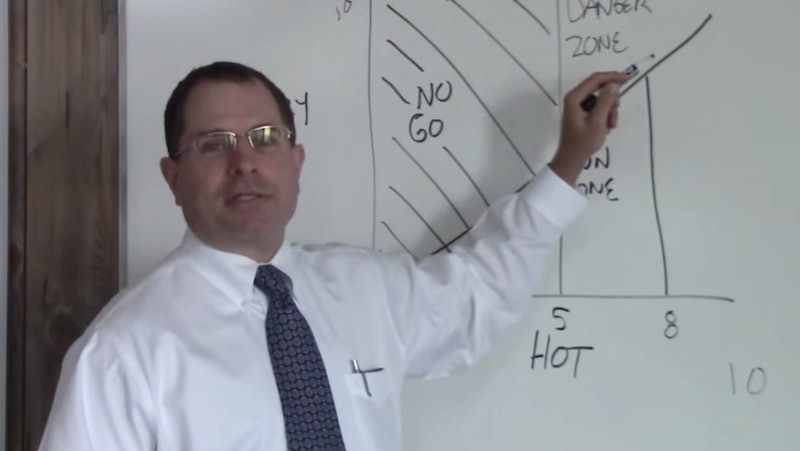 Last week I wrote about a man named Dana McLendon's "Hot Crazy Matrix," which he billed as a young man's guide to understanding everything there is to know about women — essentially that we are all some level of crazy and money-hungry and that if we aren't those things then we are not humans but mythical beasts. After the matrix went wild on reddit, a redditor named TarraDactyl responded to McLendon with a matrix of her own, and it's considerably more nuanced than the original (low bar, I know).

McLendon suggested that guys vet women based on how hot and how crazy they are, while women vet men based on how cute and rich they are. Where are the axes for chemistry, intelligence, emotional supportiveness, sense of humor, political views, access to exotic cheeses, lack of douchey friends, quality of record collection, ability to paint the nails on my left hand because I can't do it myself, etc.? Perhaps I should create my own Julie-specific matrix, but in the meantime TarraDactyl's can act as a placeholder.

While I have a couple problems with this redditor's graph (namely that guys who are manual laborers or service industry workers are considered undateable even if they exhibit "deep kindness and moral conviction," and that movie stars and pro athletes are apparently the romantic holy grail), she gets a lot of things right. She rules out guys who are "full-time hustlers" or those who can't keep a job, and warns against dating guys who are criminals, cheaters, or selfish jackasses. Basically, she thinks that "husband zone" dudes are solid, caring people who can hold down a job and pay their way — which, in my opinion, should be important qualities in a wife, too.

More like this
8 Completely Unserious Tips To Make Your Cuffing Season A Success
By Ginny Hogan
How To Politely Reject Someone Who Keeps Asking You Out
By Laken Howard and Lexi Inks
10 Ways To Be More Empathetic To Your Partner
By Raven Ishak and Lexi Inks
Think Your Partner Is Cheating? These Tarot Cards May Confirm Your Suspicions
By Kristine Fellizar
Get Even More From Bustle — Sign Up For The Newsletter