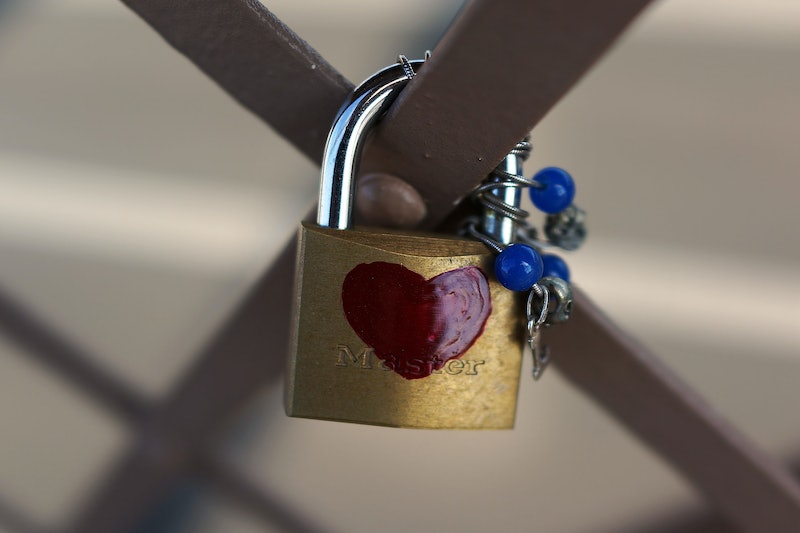 I am something of an experiential authority on long-distance relationships, insofar as I keep getting myself into them regardless of how much they can totally suck. Once, I even talked to a therapist about it on the radio (I was an invited guest, not a call-in! A little benefit of the doubt, please). She asked me something along the lines of, "Why do you think you keep getting into these? It seems that you're doing it on purpose." I responded with something horrible, possibly, "Maybe I don't like to have dudes around that often!" Then I remembered that my boyfriend and his mom and my boss and all sorts of people were listening, and I wasn't sure if it played off as a joke. I wasn't sure if it was a joke. And that's why I don't go on the radio anymore. (And also because no one has asked me lately.)

I digress. The point is that I've done LDRs on LDRs, and more than enough to drop that acronym casually. Relevant experience includes:

The good news is, long-distance relationships can work. Some studies even suggest that couples who are geographically separated for periods of time can still function just as well as those who aren't, if not better. Research published last summer in the Journal of Communication revealed that being apart physically may actually bring two people closer together since it forces them to find new, more creative ways to connect with one another.

But that doesn't mean it's not difficult. If you're reading this, I'm guessing that you're trying to decide if it's worth staying in a long-distance relationship during college (you're not alone — more than a quarter of all college students are in the same boat, according to some estimates). Or maybe you've graduated college and you've been at this for a few months now, and you're wondering if it gets better. Because I feel your pain, I've compiled five questions for you to ask yourself. If you're willing to be honest about some scary things, I promise this will offer valuable insight into whether or not the LDR is right for you.

1. How physical is your relationship?

I'm not even just talking about sex! But of course I'm also talking about sex. Even if you're, like, a super-deep person who loves your significant other strictly for their brain and personality and the meaningful conversations you have about anything and everything and don't care about the rest, it can still be really, really hard not to have that person around for a hug when you need one. Do you spend most of your time snuggled up on the couch, or out and about in public? Are you going to be OK with a videochat standing in for real physical connection for awhile?

2. How long have you been dating?

Length of time isn't everything — I started dating my current boyfriend while we were long-distance, not even prior to! — but it's a valid consideration. If you've already been together for years and know each other really well and are super comfortable with each other, then an LDR might be worth a shot. If you're pretty new and still getting to know each other, it doesn't mean you can't survive the distance, but also, you know, how worth it is it really? Do you suspect this is one of the Great Loves of your life, or a person you'll have forgotten all about a year from now?

3. How's your communication looking these days?

Listen up, kids, this is important: an LDR can only work if you and your partner have kickass communication. I cannot overstate the extent to which you need to be really, really, really, really, really good at it, because communication is all that an LDR consists of. That and wistful #tbt Instagrams, anyway. It can be hard, sure, but if you make it a point to check in on how one another is feeling, you stand to grow even closer (some studies show that couples who try long distance actually form more intimate bonds as a result of more frequent and meaningful communication). That being said, if one of you has a lot of trouble expressing feelings or sharing thoughts and isn't willing to work on talking things out, then an LDR is not going to be a good experience.

4. Does your relationship have any major foundational problems?

Here's the thing: I think that, in most LDRs, it's not distance, per se, that breaks couples up. Instead, it's what distance does, which is exacerbate pretty much every relationship issue imaginable, including some you might not have realized existed from a close range. While this is, at least, sort of positive in that it forces you to dig deep and face the unpretty parts of being in love, it's not healthy to think of an LDR as a test, either. So, if the two of you have any bedrock problems or enduring insecurities, know that they will come up — and, if you know what they are, definitely don't wait until you're in different states to address them. It's like running a marathon on a fractured ankle.

5. What's the game plan for your separation — and the end game?

It's important to plan out reprieves from the separation if you can. Are you able to see each other once a month? More? Less? How many years of separation are we talking here? Two? Four? If you're starting college, it can be really tricky to think that far ahead. There's a good chance, in fact, that one of you is going to take off to a foreign country to "find yourself" on a study abroad trip at some point, or that you'll become interested in industries with different geographical necessities. You need to know how long you're both OK with doing long-distance in general, and how long you can go without seeing each other at all — or, because it can be kind of hard to know what your needs are before you're actually experiencing separation, you at least need to promise yourself that you'll do everything it takes to be realistic and communicative about those needs.