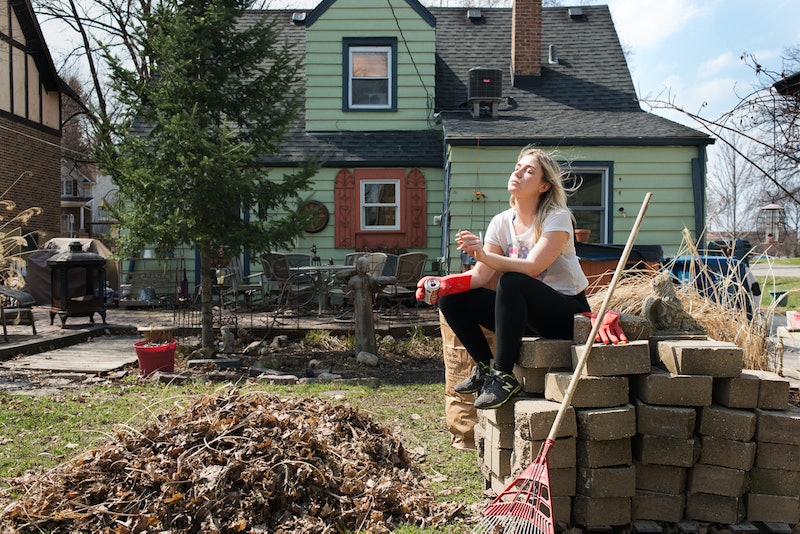 It’s no secret that a huge amount of college graduates over the past few years have moved back home with their parents. For many, student loans are too great, the cost of living is too high, jobs are too few, and salaries are too small to make living on their own financially feasible. It’s not easy for anyone — either for those trying to jump start their adult lives while still surrounded by the people and things that made up their youths, or for the parents who find themselves unsure of how to interact with their children now that they are children no longer. They’re called “Boomerang Kids,” and photographer Damon Casarez’s series of the same name illustrates with stunning clarity just how difficult of a situation it can be.

Casarez, who hails from the Southern California suburbs, graduated from the Art Center College of Design in 2012 with over $100,000’s worth of student loan debt. Although he got by for about a year post-graduation, he eventually ran out of resources and had to bunk down with his parents. “After selling some equipment I had to call it quits and the last resort was to move home,” he told Slate. “I moved onto my parents’ couch in the living room because my old room was turned into an office.” It was after roughly a month and a half of crashing on that couch that he started to wonder how other people in his situation — college graduates who, due to crippling student debt, a still-recovering economy, and a horrible job market, ended up moving back in with their parents or never left home in the first place — were coping.

Casarez started looking for other boomerang kids and photographing them. He contacted friends, placed ads on Craigslist, and reached out via social media — and then in the spring, the New York Times Magazine got wind of his work and commissioned more portraits. Over about two and a half months, he traveled all over the country, ultimately photographing 15 people in 14 cities and eight states; the photos were published at the end of June with the article “It’s Official: The Boomerang Kids Won’t Leave.” (The captions for the photographs seen here were drawn from that article.)

In the month since its publication, the article has racked up over 1,600 comments. Many of them reveal the stigma boomerang kids frequently face; others take a more temperate view. Either way, though, the trend moving back home after graduation isn’t showing any signs of letting up — and may, in fact, be the “new normal” (whatever that means).

Casarez also served as interview subject himself for an accompanying feature on the New York Times’ 6th Floor blog. “The whole intention of the project was to have the sense of contrast with the person and their environment, to show that they are not in their own place,” he said. "I wanted to show the juxtaposition of their adult life with the décor of their parents’ home. That was pretty important to make the photographs successful.” Perhaps the most stirring example of this juxtaposition occurs in the photograph of Robert Shane Ellis, a 29 year old from Alhambra, CA who majored in Asian humanities at UCLA and ultimately hopes to work in film. Ellis’s room is still the same as it was when he was a child, filled with Power Rangers cardboard stand-ups and Batman action figures. Even though Ellis has interviewed for numerous jobs at places ranging from Arby’s to Office Depot, he’s running into the problem of being overqualified: “It seems like they want people that aren’t going to move on to another job really quickly because they think if you have a Bachelors, you’re not going to stay,” he told the Times.

As for Casarez himself? He’s still living at home, but things are looking up. “I’m trying to get out as soon as I can,” he said to 6th Floor. “It’s just a matter of taking care of finances. The first thing is I need to buy a car and save enough money to where I have a few student-loan payments in the bank. Freelance work is very up and down, so it’s hard to gauge how steady work will be.” He added, “But what I learned while going around the country talking to these people is that they are a very optimistic group. Even though we’re in this situation that is not terrible but not ideal, everyone is optimistic.”

Check out the complete “Boomerang Kids” series at Casarez’s website. And while you're at it, read these books. They might not solve your problems, but they'll help you get some perspective. Promise.

More like this
The Spiritual Meaning Of Angel Number 000, Explained
By Kristine Fellizar
It's A Pleasure #53: Help! My Boyfriend Won't Tell Me Why He Stopped Going Down On Me
By Sophia Benoit
Everything You Need To Know About Angel Numbers
By Nina Kahn and Brittany Beringer
Here’s Your Daily Horoscope For October 7, 2022
By Mecca Woods
Get Even More From Bustle — Sign Up For The Newsletter