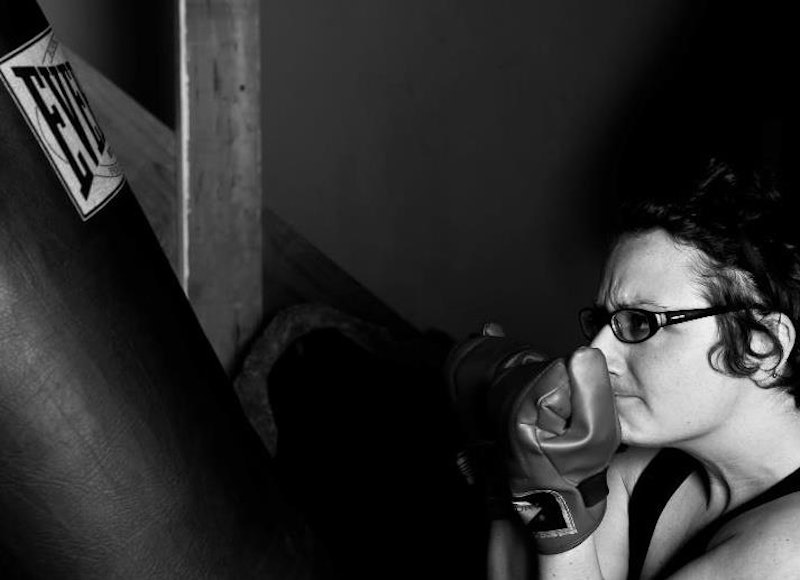 I have my father’s nose. This has been both my explanation and my excuse for my nose for as long as I can remember. It wasn’t always this way, of course. I came into the world with a cute button nose, as all babies do, but by the time adolescence hit, my nose had gone ahead and grown into its full size, leaving the rest of my face to struggle to keep up.

I didn’t really know my nose was big until it was pointed out to me in sixth grade. I was sitting in class, and for no reason at all, this kid Dominick told me my nose was “really huge.” I was shocked and devastated. It was the first time in my life that my looks had been insulted (to my face, at least). I cried, because of course I did. The teacher wouldn’t let me go to the bathroom, so I tried to keep my sobbing to a minimum at my desk. That was the day that my insecurities about my nose began.

Since it was smack dab in the middle of my face, my nose was an easy target. Whereas insults like “ugly” and “fat,” are usually the first to get hurled at a misfit, I got “big nose.” My high school bully harped on it, even nicknaming me “Beaker.” To be honest, in all my naiveté I thought it was a reference to the Muppets character at first, but it didn’t take long for me to realize I was “Beaker” because of my “beak.”

All these years later, my father still jokes that I was gullible enough to believe his offer. "Do you really think I'd give you money to let someone hack away at your beautiful face, Mandy?" But it worked.

My insecurities about my nose weighed heavily on my mind. I kept my hair long as a sort of shield, and never wore it up. Sure, I wasn’t a fan of my naturally curly hair either, but dealing with that was far easier than subjecting myself and my nose to even more scrutiny.

I became determined to get a nose job. I believed in my heart of hearts that it was the only way I’d be able to have a long and fulfilling life. With a perfectly small nose, boys would pay attention to me (in a good way), I’d finally have the confidence to get the pixie cut I’d been coveting, and even my major depressive disorder would go away. I’d be a new woman!

When I told my dad what I wanted, he agreed to make an appointment at a plastic surgeon. He was sure that once they detailed the actual procedure — the breaking of the nose, the recovery time, and the black eyes I’d have for weeks — I’d turn away from my “dream.”

I was 16 at the time of the appointment; prime time to knock the old nose off my face and get a new one. The doctor explained what rhinoplasty was, what the procedure would entail, and how long it would take to heal. His explanation was far less bloody and painful than what my father had told me. I told the doctor that I needed to think about it, even though there was no way my father was going to drop the money on the surgery. I left the office with high hopes for a brighter future. I just needed to start babysitting more.

I opened a savings account and called it my "Get Out Of Here Someday/New Nose" fund. If my father wasn't going to help me, then I'd have to do it on my own. And with 18 only two years away, it's not like he could stop me.

One day after school, a neighborhood girl came to the door to sell Girl Scout Cookies. I hadn’t seen her in a year or so, and at first, I didn’t recognize her at all. There was something about her face that was completely different. She told me that she had been in a sledding accident and had broken her nose. What I was looking at was the result of it being “fixed.” It was scary to see how much she didn’t look like herself. In that moment, as much as I hated my nose, the fear of waking up and seeing the new me after rhinoplasty didn’t seem so exciting anymore. It seemed horrifying.

But that wave of horror passed, and I continued to obsess about my future nose job. I saw photos of Jennifer Grey’s new nose, and took the fact that I was told I looked like Baby all the time as a sign I was right. The only way I was going to get through life was by having a “good” nose.

About the time I started applying to colleges, my father sat me down for one of his infamous father-daughter chats: He told me that he would either pay for college or a nose job. After listening to me piss and moan about my nose for the past several years, my father had had enough. "If you want to botch up your face," he told me, "Then go for it. But you have to choose between that and college. What's more important to you?"

I jumped at the chance to be “normal,” and to finally physically fit in with my peers. But I couldn’t come to a decision right then and there. I needed time to think. (Honestly, I didn’t have any major desire to go to college, except for the promise of being a college DJ, so what I was really weighing was my nose against stacks of vinyl.) Still, after a couple of weeks, I decided college was the way to go. I’d get my nose fixed later. It wasn't like it was going anywhere.

All these years later, my father still jokes that I was gullible enough to believe his offer. "Do you really think I'd give you money to let someone hack away at your beautiful face, Mandy?" But it worked.

In college, my nose seemed less of an obstacle. I made a self-deprecating habit of joking about it, as if to both apologize and beat people to the punch. I felt that if I acknowledged it, then it would be harder for people to either vocally or silently comment on my nose. I wanted them to know that I was well aware of its size, and that I planned to do something about it. It was a Don’t worry, you guys. I know it’s huge, but I’m right on top of that type of mentality.

One day, I was staring at myself in the mirror, pushing down on the bridge of my nose to make it look smaller. I was obsessing, as usual, because that was totally my thing. I could see my boyfriend at the time watching me with a smirk on his face in the reflection of the mirror. When I asked him what was so funny, he told me, "I love your nose. I'd be sad if you ever changed it." I took my hand away from the bridge of my nose, and felt something shift inside me.

It was the first time in my life that someone outside of my family had said something positive about my nose. I felt a strange surge of relief. Not because I needed some sort of validation from a man, but because someone had finally said what I'd long worried: That fixing my nose would make me less me.

Soon after, I cut my hair into the pixie cut I had always wanted and moved forward. The world didn't end, and I even I got plenty of compliments. My nose was never far from my mind, but at least it wasn’t a major obsession.

Shortly after college, I moved to New York City. Between struggling to make rent and trying to pursue my career, my focus on my nose fell to maybe No. 5 or 6 on my top 10 list of concerns. I had come to the city to be a writer. I may have once believed that getting a nose job would make my life better, but in my 20s, I realized that looks had little to do with talent. (To the best of my knowledge, rejection letters for writing aren't based on nose size.)

By the time I reached 30, I wasn’t just at peace with my nose, but at peace with myself. I had gotten out of my 20s alive — despite some major roadblocks — and I had accepted my flaws, every single one of them, with a full-on, almost suffocating embrace. Like Popeye, “I am what I am, and that’s all that I am.” I’m the woman with the larger-than-average nose, but I’m also more than that. I’ve got layers, you guys.

Admittedly, I’ll always be overly aware of my nose. Even when I got married this past May, I was sure to stand so our guests would see my “good” side. My husband, who also has a French nose, was forced to stand on his “bad” side, but for him, it wasn’t a big deal. As his daughter told me, “In France, you don’t get to complain about your nose. We all have big noses.” That shut me up.

When I look back at all the time I wasted hating my nose, energy that could have put toward a greater good, it sort of embarrasses me. I don’t regret it, because it was essential to who I am today, but it just seems so silly. No two noses are alike, and that’s a good thing.

In the end, I don't think it was as much about my nose as it was about having something to blame. I was an awkward, unpopular kid who let a handful of peers define my opinion of myself. By being self-conscious about my nose, I could justify keeping to myself, instead of growing the necessary backbone to step out of my shell. But as time wore on, I realized that getting a new nose wasn’t going to make me a better person or even more confident — time was the only thing that could do that.

I no longer have my father’s nose. I have my nose. And just like the rest of me, I own it now.

More like this
How To Politely Reject Someone Who Keeps Asking You Out
By Laken Howard and Lexi Inks
Bustle Daily Newsletter: October 4, 2022
By Hayley Schueneman
Here’s Your Daily Horoscope For October 7, 2022
By Mecca Woods
Angel Number 1144 Wants You To Look Forward To New Beginnings
By Kristine Fellizar
Get Even More From Bustle — Sign Up For The Newsletter