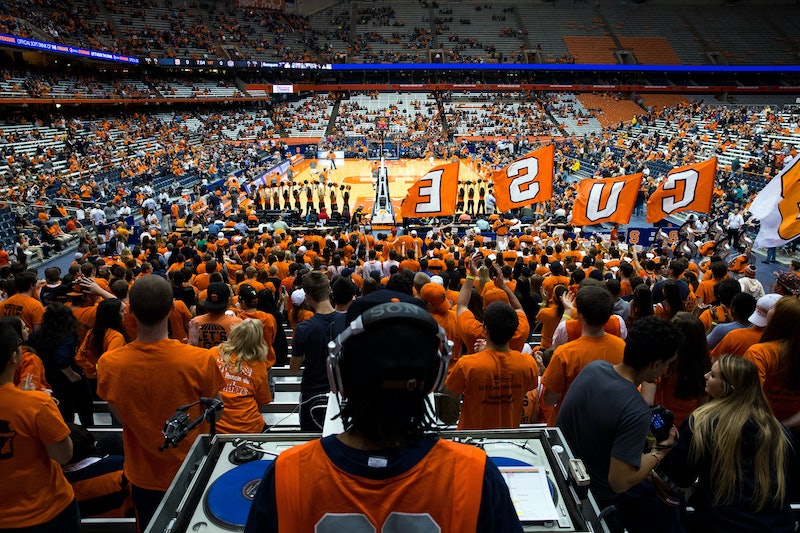 They say you don't know who you're gonna meet going into college, but when you go to Syracuse you're guaranteed at least a few friends. Their names are Chuck, Maggie, Lucy, and Harry. And if you're really adventurous you might even meet P.J. along the way.

Yup, these are the names of some of the top bars on the Syracuse Hill. And these are the local watering holes you'll frequent even when the weather hits -18 degrees. (No, seriously, I've gone out to the bar in -18 degree weather, but more on that later.)

It's really no surprise that Syracuse was just named the top party school in the nation by the Princeton Review. I mean, it does snow for three quarters of the school year, so what else is a girl to do? At Syracuse, we truly do take partying to another level of awesome, but if you're about to head out there to start school this fall, you might be wondering what you can expect.

Oh, I'll tell you. Here's what it's like to be a part of the Cuse party scene and how it changes (because the weather never will) during your years in undergrad. ...

So it's your first weekend at school and it's party time in the Cuse. Prepare to be moo-ed at.

After being solicited for nearly every frat party the first weekend of school, you and your entire freshman floor will head out. You will be moo-ed at because duh, you're like cattle in the streets. This will continue until enough frats turn you down. Then you'll graze over to Euclid Ave. house parties.

One of your first nights out, you'll pass DKE and be amazed

I mean, it has a freaking Moroccan smoking room. And Dick Clark is their most famous alumni, so it's kind of like seeing a celebrity.

a few weeks later, you'll be written up by your RA for drinking in your room

But you'll never ever forget the first time the sketchy liquor store on Marshall Street sold you underage Keystone Light.

Because what self-respecting person would EVER eat Sbarro?

You won't be smart enough at this point to play with water instead of beer. You'll pretend you totally don't see dirt floating in your beer. #yolo

If you refuse to get swept up in Greek life, then you'll join the grad students for Flip Night at Faegan's

Wednesdays are the night to secretly let out that gambling problem of yours.

You'll eventually have an open keg at the bar, or know someone who does

You'll have heard of or met Crazy Chris by now.

You'll somehow scrounge up cash for multiple $3.50 pitchers at Chuck's

Then you'll graduate and laugh/cry at how expensive pitchers are in the "real world."

You will most likely be unrecognizable and look like a ninja turtle or other warrior in these subzero temperatures. On the flip side, when it hits 40 degrees, you'll go out in only a T-shirt because that's basically summer weather.

It's over 60 degrees out? It's the most glorious of party times, guys!

At some point, you will learn how to balance your beer while doing a slip 'n slide

This usually happens during that one nice day a year. And it's usually in Walnut Park.

You'll also pray you get the guy with the ponytail because he's awesome. In retrospect, you'll sit in amazement that you now walk miles to get to work but couldn't survive the five-block walk to Euclid when you were a young, spring chicken.

Castle court parties will never cease to amaze you

Are all these people just in an underground frat? Are they all just friends? Why is this place that sort of seems like prison so much fun?

every single night will end with pizza

Auggies, we will never ever forget your $1 slices … WITH RANCH!

So there's Two for Tuesdays, Flip Night on Wednesdays, Thirsty Thursday, Friday night happy hour, and then, well sorry, it's the weekend.

You never know when you're going to need to graffiti the walls in Chuck's.

Wait, other people study on Tuesdays and Wednesdays? Not comprehending.

You'll probably forget who won at least one (five) basketball games a year, because beer

The Carrier Dome sells beer. Delicious beer. Step down, all you other schools.

Oh they canceled that? That's weird because the all-day drinking event is still going strong.

you'll think that you'll graduate from this party scene when you leave Cuse, but in reality you can never escape it

Have you heard of Murray Hill? Oh right, so has the rest of your graduating class. Hey, at least everyone here bleeds orange.