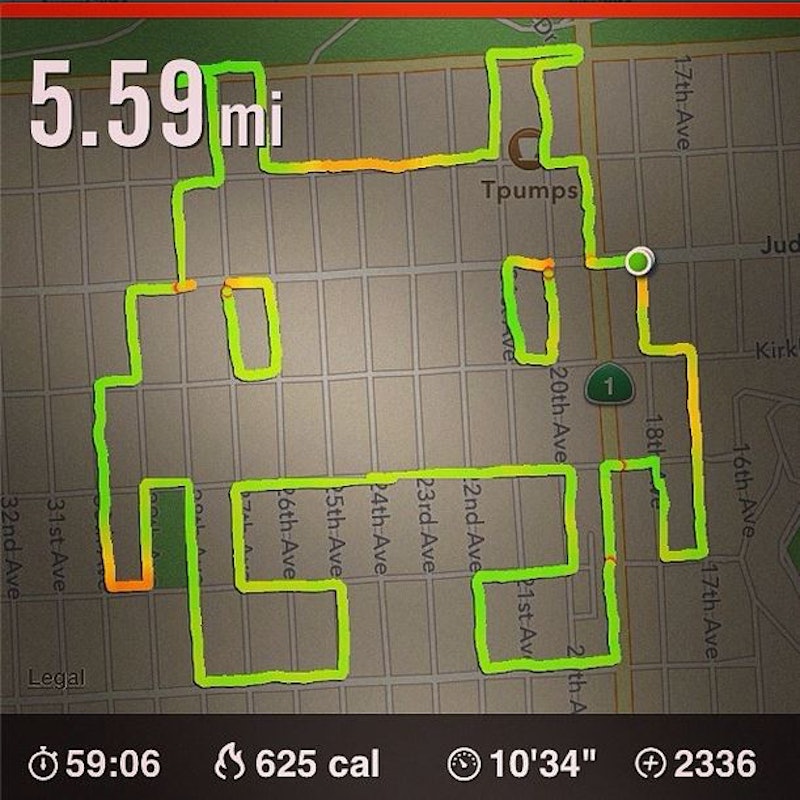 There are a lot of running apps out there. Many of them map your routes each time you go for a run, thanks to their fancy-schmancy GPS technology. But only one of them is being used to draw surprisingly accurate images of dicks in each map. Ladies and gentlemen, meet Claire Wyckoff, whose Running Drawing Tumblr showcases all of the NSFW pictures she’s managed to turn out while running with the Nike+ app.

By day, Wyckoff is a copywriter based in San Francisco. Running Drawing is still fairly new — its first map appeared on June 14, 2014 — but as Stacey Ritzen of UpRoxx noted, Wyckoff is just getting started. “Think about it,” she wrote. “The possibilities are endless. Dick 5Ks? Cock and Balls Half Marathons? PENIS-SHAPED MEDALS? As both a runner and purveyor of fine dick humor, my head is absolutely spinning with the possibilities.” Mine is, too. I don’t think Jezebel’s Erin Gloria Ryan is alone in her feelings about the Tumblr, either: “Two takeaways here," she said. "First, this is literally the only reason I’d ever use Nike+. And second, I think I want to marry Claire Wyckoff.” Claire? You might want to prepare yourself for an absurd number of marriage proposals. They're coming, and it's only a matter of time before they totally take over your inbox.

Dicks aren’t the only things Wyckoff draws as she runs, by the way. She’s also done a corgi:

An alien from Space Invaders:

And Slimer from Ghostbusters:

But the dicks? Are kind of the best. Because nothing beats the fact that someone is actually sitting down and carefully plotting out running routes, purely so she can draw dicks on a map and post them on the Internet. See more of them over at Running Drawing or on Wyckoff's Instagram account.

Also, does anyone else want to know what Janet Silverman of “Janet Looks at 89 Dicks” might think of these GPS-driven masterpieces? Someone needs to send them her way, stat. I sense a sequel video in the works. ...