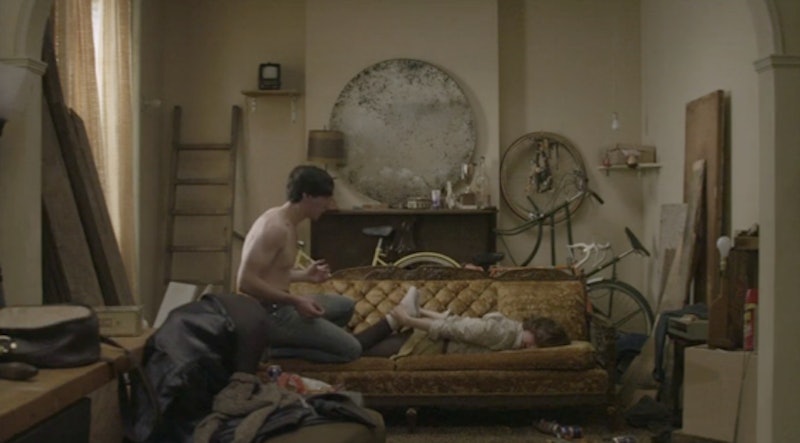 If Cosmopolitan Magazine figured into any part of your early sexual education, you surely have a memory or two of puzzling over the magazine's infamously inventive sex position guides, wondering if that was how people actually did ... it.

Pretty soon into your actual sexual career, though, you realized that positions like the Sensual Spoon and the Sexy Scissors were about as practical as becoming a philosophy major (and just as likely to end in frustration and dejection). This hasn't stopped Cosmo from coming up with new, surreal-looking sexual positions on the regular for the past half century, of course, and it also hasn't prevented most of us from occasionally trying them out due to an excess of boredom and/or alcohol in our lives. But despite all that innovation from Cosmo's end (and all that sangria on your end), these out-there sexual positions always seem to end not in ecstasy, but in major rug burns.

This week, Cosmo seems to have finally admitted that sex positions that promise to spice up your love life, achieve better orgasms, and improve your credit score are just as impossible to pull off as many readers have long claimed. After enduring some criticism this week for a feature on "28 Mind-Blowing Lesbian Sex Positions" (some of which, bloggers like the writer Jenny Block noted, crossed the line from fanciful whimsy into actual physical impossibility), Cosmo responded with an article of ultra-mundane heterosexual sex positions titled “50 Unretouched Sex Positions for Real People” — a series of variations of guy-on-top missionary with such spicy additions as a blanket or a T-shirt.

While experimenting in bed is a great way to keep your relationship fresh and kill time until So You Think You Can Dance? comes on, the reality is that there are a few sex positions that work well for each of us, and the rest are pretty much nothing but invitations to dissatisfaction, feelings of frustration, and possibly slipping and falling in the shower. I say this not to be a prude but to help us feel less inadequate — who among us hasn't felt like a sexually unadventurous loser on occasion while doing the dude-on-top/ girl-on-top/ doggy-style combo for the 1,000,000th time? Cosmo isn't to blame for this, of course, but historically, their Cirque du Soleil-inspired sex advice certainly hasn't helped.

But if Cosmo is opening up to the idea that the most effective sexual innovation may not necessarily involve standing on your head and using your kitchen island for leverage, it might improve not just the sex lives of American women, but the future of the magazine. If Cosmo embraces being realistically in touch with our actual sex lives and offering up valuable tips that we might actually apply in bed, the magazine stands a great chance of transitioning from a campy read into a more relevant source of sex advice for modern women.

I hope so. It took a lot of moxie for Cosmo to print an article skewering its traditional stock in trade, and I hope it's the beginning of a whole new, more grounded attitude for the magazine. Because that, my friends, would be a move even bolder than the Sexual Seesaw.