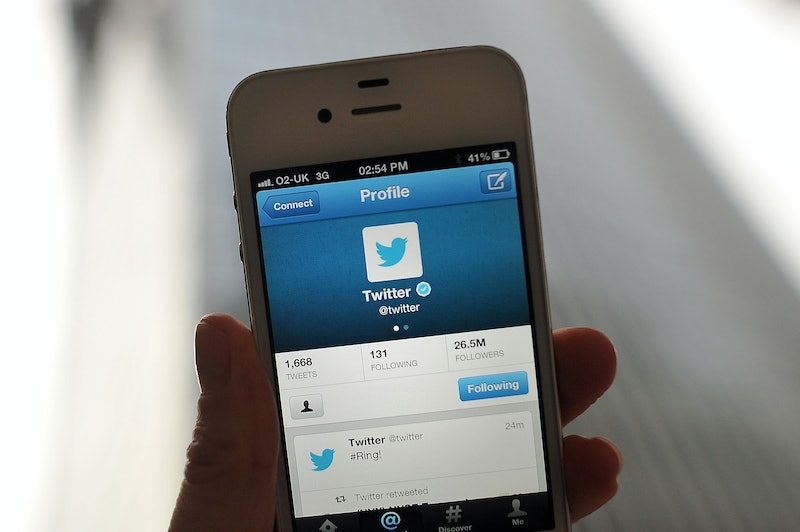 Attention people, this is not a drill: Twitter psychosis is real. Or at least, potentially real according to a new study published in the Journal of Nervous and Mental Disease. But "potentially real" is a little too real for my taste.

The study focuses on a patient researchers refer to as Mrs. C, who was admitted to a Berlin psychiatric hospital at the age of 31 following a mental breakdown. Prior to the breakdown, Mrs. C didn't really show any signs of psychotic behavior, but she was massively addicted to Twitter. Over the course of the previous year, her friends and family claimed, she'd begun spending all her time on the site, "neglecting her social relationships and, sometimes, even meals and regular sleeping hours,” according to the study.

And, in fact, her first symptoms of mental illness manifested through Twitter. The study reports that she became convinced a famous actor was secretly communicating with her through different Twitter accounts, sending her coded messages. She became convinced that the Twitter messages she received could be interpreted symbolically and that they gave her special tasks she needed to complete. After a few months, she began to also see symbols in her off-line life as well, and became convinced a secret organization must be behind it all. Not long afterward, she was admitted to the hospital.

Though this obviously is only a single case and can't really be taken as representative of a wider problem, the researchers who observed Mrs. C feel that the nature of Twitter might have contributed to her mental health issues. They write that "the amount of symbolic language (caused by the limitation of 140 characters per Twitter message), the automated spam responses with seemingly related content, and the general interactive features of Twitter might combine several aspects that could induce or further aggravate psychosis." Though they don't think people without an existing predisposition for mental illness would be affected, that still is not at all reassuring.

It's well documented that social media can have all sorts of affects on your emotions (Facebook, for instance, can make you lonely and lower your self-esteem). Twitter itself might be making us more self-centered. But there's a big difference between making some changes to your emotional state and giving you a mental health disorder.

Again, it's way too soon to say if Twitter can cause you to develop mental health issues; one case is no reason to panic. Still, with social media becoming a bigger and bigger part of our daily lives, it's scary to think that what we jokingly refer to as being "addicted" to Twitter could carry with it some real, negative consequences. Personally, I doubt this phenomenon will prove to be very widespread, but still; it makes you wonder. After all, social media sites keep getting better and better at roping us in. Will they one day become a literal threat to our sanity? Only time will tell.

More like this
Why TikTok Is Flooded With Controversial Videos About "Pick Me Girls"
By Courtney Young
Why Everyone Is "Soft Tagging" Friends On Instagram Right Now
By Alexis Morillo
26 Ghost Story Podcasts To Get You Ready For Halloween
By Jessica Booth, Mia Mercado, JR Thorpe and Emma Carey
20 Smart Devices Under $35 That’ll Change The Entire Vibe Of Your Home
By Emma Carey
Get Even More From Bustle — Sign Up For The Newsletter