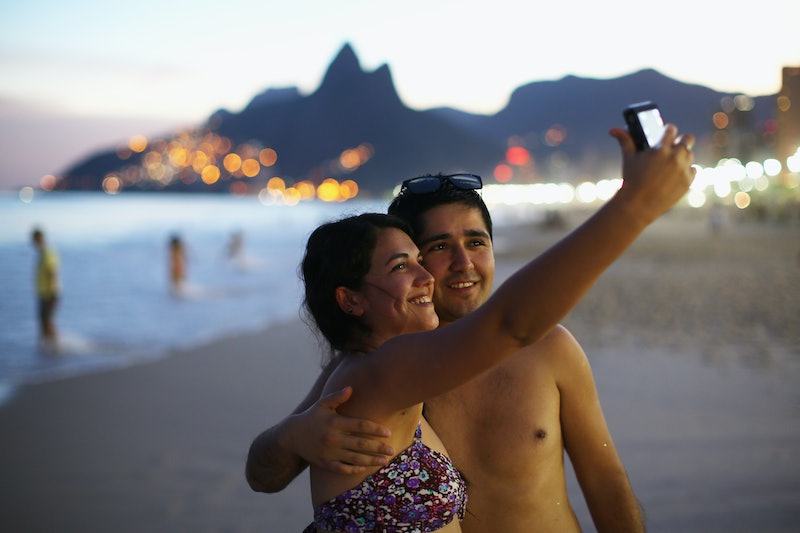 Plenty of people describe their partners as their “soul mates.” We bandy about this and other phrases like it — “my better half,” “we’re made for each other,” “two become one,” and so on — without a second thought most of the time… but new research suggests that we might do well to give up the habit. It turns out what that how you frame your relationship has a huge effect on how strong it is, and thinking of love in terms of unity completely undermines it. The solution? Start thinking of love as a journey instead.

Spike W.S. Lee and Norbert Schwarz of the University of Toronto published the findings of a study they conducted examining the framing of love in the September 2014 issue of the Journal of Experimental Social Psychology. For the purposes of the study, they narrowed it down to two frames: One that views love according to the Aristotle quote, “Love is composed of a single soul inhabiting two bodies” — the unity view — and one that views it according to the classic wedding vow, “I, [your name], take you, [partner’s name], from this day forward, for better, for worse,” etc. — the journey view. Then they got to work.

Anyway, Lee and Schwarz used 73 people for their sample size, adults of all ages who had been in a committed relationship for at least six months. First, they gave them a quiz asking them to identify five phrases as well as indicate whether or not they had heard them before. Some of the phrases were random — things like “cross your fingers” and what have you — but others evoked one of the two frames: Things like “made for each other” for the unity one, and phrases like “look how far we’ve come” for the journey one. It’s important to note that each participant was primed with only one frame — so, no single person saw in their quiz a phrase that evoked unity and a phrase that evoked journey.

(That's us celebrating. Yes, we have a party cannon. Who doesn't?)

This may not come as too much of a surprise; after all, as Melissa Dahl at the Science of Us points out, previous studies have shown how the belief in soul mates can ultimately hurt us. When she spoke to Haverford College’s psychology department chair Benjamin Le, who was unconnected to Lee and Schwarz’s study, he told her: “There is research that shows that people who believe in ‘destiny’ put less effort into working through relationship conflict. The idea here is that if we are soul mates, then nothing will go wrong in our relationship, and it will be easy. A conflict makes a destiny-believer question whether the current partner is actually their soul mate, and then they give up on working it out.”

As the New York Times notes, though, the previous research only looked at the correlation between the belief that love is a journey and the strength of relationships — they haven’t dealt with the causation. Lee told the Times that he and Schwarz used their study to “manipulate these two frames directly to see if we have causal influence”; and ultimately, he concluded, “I think it’s pretty clear that the journey frame serves some protective function.”

Let’s unpack that idea a little further. Said Schwarz to the Huffington Post, “When people think about their relationship in terms of unity — that they were ‘made for one another’ and so on — it makes them vulnerable when a conflict comes up. Why? “Because a conflict indicates that maybe you were not ‘made for one another’ — you’re fighting, after all.” If, as Lee says, the journey frame serves as a method of protection, then here’s one way in which it works: According to Schwarz, “It’s actually a good thing: You were fighting and you’re still together. So you overcame these past difficulties and you have a good chance of probably overcoming future difficulties as well.” Journeys allow for change and evolution. Unity implies that everything is perfect as it is — even if it’s not.

Maybe if Romeo and Juliet hadn't been so taken with the ideas of soul mates, they would have made it through the play alive. Sorry, guys.

As Tracy Moore over at Jezebel brings up, the majority of Americans report that they believe in soul mates ... but maybe it’s time we ditched the idea. Journeys are exciting, and if life is a journey, so is love. Besides, what’s more appealing: A world in which you discover cool new things every day, or one in which everything is always the same, all the time? I’d rather go exploring. Life’s no fun if there are no surprises.

More like this
10 Ways To Be More Empathetic To Your Partner
By Raven Ishak and Lexi Inks
The 19 Best Tweets & Memes About Bisexual Awareness Week
By Lexi Inks
21 Signs You're Not In Love Anymore
By Sara Altschule, Kathleen Ferraro and Carolyn Steber
Are Quality Time & Gift-Receiving Love Languages Compatible?
By Lexi Inks
Get Even More From Bustle — Sign Up For The Newsletter