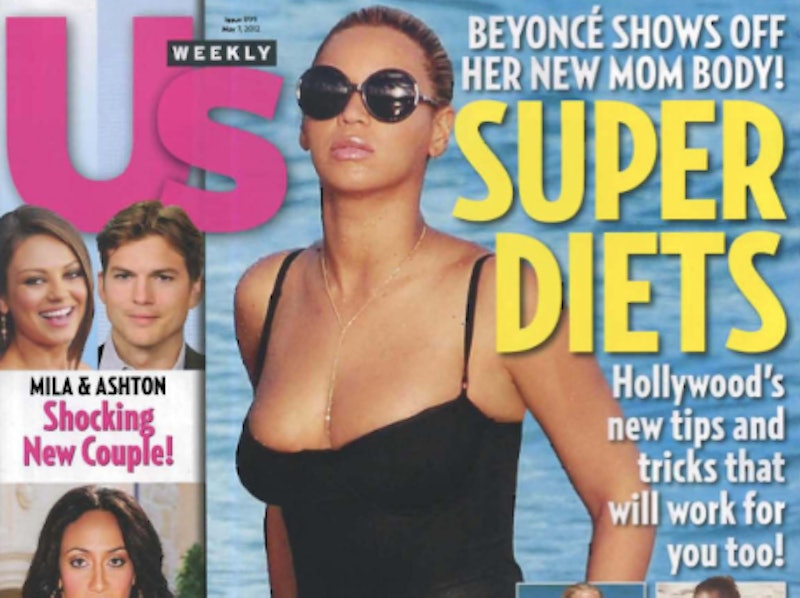 If you're like me, the magazine display at the grocery store checkout line is a source of fascination — more for the ridiculousness of the magazines than for the gossip they contain. It's pretty easy to see that the magazines are sexist in the way they treat their famous subjects, but have you ever wondered what would happen if they suddenly started treating the celebrity men the way they treat the women? Well, over at Huffington Post, they decided to imagine just such a world, and the results are hilarious.

The project is somewhat reminiscent of Vagenda magazine's contest to take sexism out of headlines, which included such memorable alternate titles as "Woman Has Legs," "It's Mildly Breezy Outside," and "Woman in Tracksuit Probably Not Disowned by Entire Family." Except instead of just re-writing the headlines without the ridiculousness, Huffington Post's project highlights the ridiculousness by changing the subjects around.

After all, would we ever expect men to gush about finally being a groom? Or carry on petty feuds over who is more attractive? Or any of the other nonsense the tabloids have us believe famous women are constantly getting up to in their daily lives? Of course not. And yet somehow, when the magazines say these sorts of things about women, they aren't laughed out of the store.

To take a peek at an alternate universe where male celebrities get this kind of treatment, here's one of the gender-swapped magazine covers. You can also check out the rest on Huffington Post.

Come to think of it, why don't they do a men's beach body issue? Presumably a majority of the women who read these are straight. Why is judging other women considered to be more enjoyable than ogling men? I'll just be in the corner shaking my head. See the rest of the covers here.