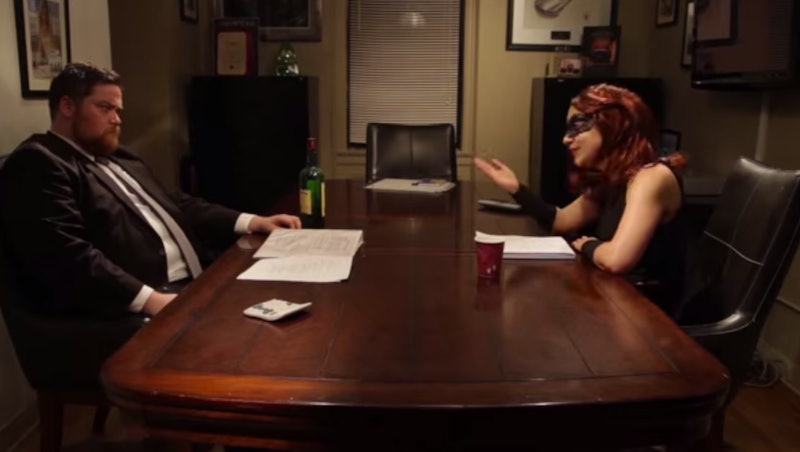 It remains an enduring mystery why fans are still waiting for a female superhero movie with a woman as the title character — not a "Black Widow kicks butt in this movie along side the male lead" type of film, but a "Black Widow's name is one the goddamn poster in giant letters with no male lead in sight" type of film. I don't know what happens when people try to pitch female superhero movies — I refuse to think that no one is pitching them; someone pitched Ant Man after all — but a new video called the "Adventures of Angelfire" probably comes pretty close. Sadly.

The video shows us Angelfire, a female superhero on an epic quest to convince movie executives to make a movie about her. As it turns out, saving the world is nothing compared to this arduous task. It's enough to make you want to pound your head against a wall for a while.

The truth is that there is no good reason for not giving the world a female-led superhero movie. Women still represent a majority of all movie goers — in fact the largest movie goer demographic is Hispanic women. Women are also make up close to half of the audience for superhero films, and that share has only been increasing. Imagine what it would look like if a woman was the lead. Plus, as films like The Hunger Games and Lucy clearly demonstrate, action films with a strong female lead do very, very well at the box office. Plus, if there are people out there who will go to see Ant Man there will definitely be people who would go see a stand alone Wonder Woman film.

And yet when people try to pitch a female superhero movie, it probably goes something like this.