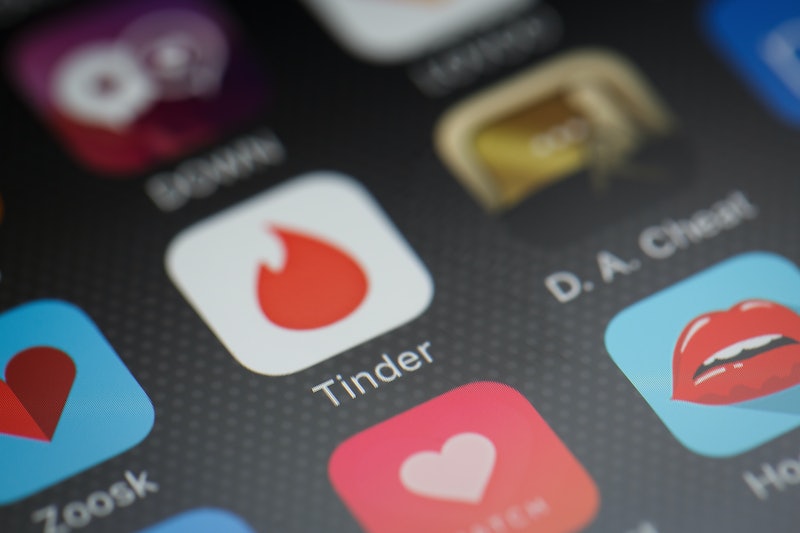 Pardon me while I step on my soap box for a moment: A psychologist named Emma Kenny is claiming that online dating has given rise to something called “Tinderella Syndrome," which makes otherwise normally-functioning adults incapable of dating anywhere but the Internet. According to Emma Kenny speaking to Look Magazine, we’re no longer able to start conversations with people we don’t know in the real world because of online dating. Gasp! The horrors! Except you know what? It’s nonsense. Complete and utter nonsense.

Here’s what Kenny said (via the Daily Mail):

“The problem is, online dating breeds impatience and insecurity. You’re suddenly inundated with so many potential love interests that you stop investing the same amount of effort into meeting actual people offline. Of course, it’s going to be harder to take the plunge to start up a conversation with a stranger in a bar than sending an anonymous message to a man with a witty dating profile — especially because you can just log off if it gets uncomfortable, rather than finding yourself trapped in an awkward conversation. But online dating was designed to enhance your love life — not replace it altogether.”

A few disclaimers: I couldn’t find the Look Magazine article in which this sound byte occurs, so I don’t have any context other than what the Daily Mail has given. Also, it’s the Daily Mail, which isn’t always reliable, so do with that what you will. And lastly, yes, I’m a little bit biased; I met my significant other online, and five years later, it’s by far the most successful relationship either of us have had. All that said, though, let’s unpack this paragraph of sweeping generalizations and oversimplifications, shall we?

Kenny's statement implies that not only is there only one "right" way to date, but even worse, that it's by chatting up strangers at a bar. I don’t think I have to remind anyone that the bar scene isn’t everyone’s cup of tea; it’s also far from the only way to meet people. What about taking a class, or going to a museum, or any one of an almost infinite number of ways you can experience new things and meet new people?

Furthermore, it implies that all people should enjoy talking to strangers, as well as that all people should enjoy being approached by strangers. It fails to take into account the fact that, no, not everyone has the personality traits that make talking to strangers a joy; it also doesn’t deal with the fact that not everyone wants to have random people start conversations with them when they’re out and about. That’s the awesome thing about humans: We’re all different. So why are we all being held to the same standards here?

2. It Does Nothing to De-Stigmatize Online Dating.

The good news is that the stigma seems to be vanishing on its own, in spite of assumptions like this one; a survey conducted by the Pew Research Center earlier in 2014 revealed that 59 percent of adults today believe that online dating is a good way to meet people, up from 44 percent in 2005. Fewer people, too, think that “people who use online dating are desperate”; that figure is only at 21 percent, down from 29 percent in 2005. Sure, online dating may not be for you — but why would you belittle something that works for someone else, especially when it ultimately has no bearing on you yourself?

3.Conversation Etiquette Rules Apply Both Online and Off.

Then there’s the claim that “you can just log off” if an online conversation gets uncomfortable, which is also inaccurate. You know how you wouldn’t just walk away from someone without warning when you’re talking to them in real life? The same is true when you’re chatting online. Gracefully exiting a less-than-stellar conversation is a valuable skill to have — and no one should ever feel “trapped in an awkward conversation.” Make your excuse, then physically remove yourself, whether it’s leaving the chat room or the actual room. You always have the power to do so, regardless as to whether you’re online or off.

4. You Still Have to Actually, Y'Know, Go On Dates With People.

And as for online dating “replacing your love life altogether?” Bollocks. Dating online is only one possible venue in which to meet potential dates. Meeting and talking to someone online is one thing, but if you click with someone, you do eventually have to go on an actual date with them — which is no different than it is when you meet and talk to someone at a bar, or a museum, or wherever. All of the IRL things that go on when you’re actively dating don’t just vanish when you use the Internet as your initial stomping grounds.

5. Far From Limiting Your Options, Online Dating Expands Them.

It’s incredibly difficult to meet people outside of your friend circle or your work environment or industry as an adult. Online dating, however, can open up a whole world of folks you might not otherwise come into contact with when you reach that tricky point in your life where making new friends, let alone potential partners, is hard enough. This is anecdata, so take it with a grain of salt — but without online dating, there’s no way my boyfriend and I would have met. When we first started dating, I was both in graduate school and working in the theatre. This meant that I spent on average 12 to 14 hours a day — essentially all my waking hours — with theatre people. Don’t get me wrong, I love theatre people — but your world gets a little small when the only folks you see day in and day out are the ones you work with. My boyfriend, on the other hand, is an engineer. Neither of us ran in the same circles, either socially or professionally; but we found each other on the Internet, making it a perfect example of online dating “enhancing” our love life.

6. Online Dating Is Great for Introverts.

Consider, too, the opportunities online dating affords people who aren’t naturally gregarious. Much has been written about how great a match online dating is for introverts; to add to the conversation, here’s what my experience was: Large crowds easily overwhelm me, I have to prepare myself ahead of time when it comes to dealing with unfamiliar people and situations, and all of the above leave me drained in their aftermath. Online dating, however, gave me the power to control the pace at which things moved. It gave me the chance to get to know people a little bit before I had to sit face to face with them for a potentially awkward, hour-long meet-and-greet. It let me protect myself from how overwhelmed dating often made me feel, and it left me better able to enjoy the dates I went on. How is any of that a bad thing?

7. Plenty of Folks Who Meet Online Go On to Get Married.

According to a study published in the journal Proceedings of the National Academy of Sciences in 2013, almost a third of married couples meet online. It’s true that this study was commissioned by eHarmony; but even taking that into account, it’s not without its merits. First, it was conducted by a respected researcher and published in a reputable journal. Additionally, although we can’t conclude from the study that online dating is “better” than offline dating, the research does support online dating as an excellent option for lasting relationships. Said Northwestern University social psychologist Eli Finkel, “Does this study suggest that meeting online is a compelling way to meet a partner who is a good marriage prospect for you? The answer is ‘absolutely.’”

So you know what, “Tinderella Syndrome?” I call bullshit. Online dating is no better or worse than offline dating; it’s just something we’ve got tucked away in our dating toolboxes. If it doesn’t work for you? That’s fine. If it does? That’s fine, too. Happy dating!

More like this
10 Ways To Be More Empathetic To Your Partner
By Raven Ishak and Lexi Inks
30 Clever Ways To Slide Into Your Crush's DMs
By Griffin Wynne, Carolyn Steber and Lexi Inks
How To Politely Reject Someone Who Keeps Asking You Out
By Laken Howard and Lexi Inks
Are Quality Time & Gift-Receiving Love Languages Compatible?
By Lexi Inks
Get Even More From Bustle — Sign Up For The Newsletter