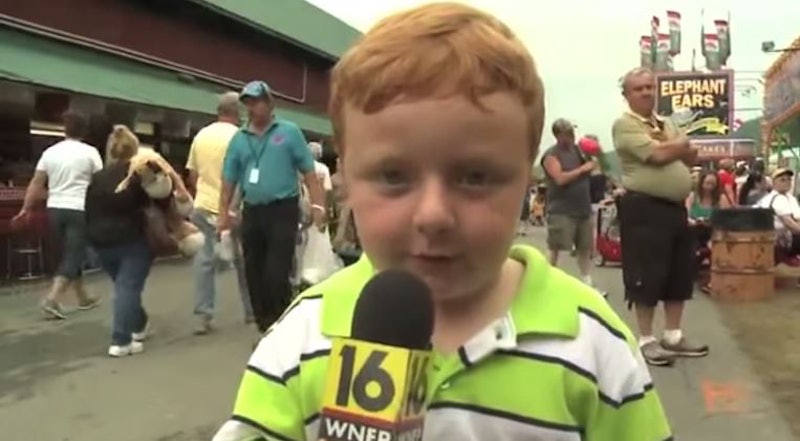 You know you’ve become a viral hit on the Internet when someone takes the video for which you’re known and remixes it. You know you’ve become a bonafide viral star when the Gregory Brothers are the ones that do the remixing. And Noah Ritter, also known as the “apparently” kid? Just hit the big time. Not bad for a five-year-old, no?

Noah became a sensation last week after his Wayne County Fair interview with reporter Sofia Ojeda hit YouTube; precocious and with a questionable grasp of the definition of the word “apparently,” he stole the Internet’s collective heart, giving us something to simultaneously laugh at and “awwwwww!” over. Now, thanks to the auto-tune masters known as the Gregory Brothers, he’s also got a hit song on his hands, called — what else? — “Apparently.” The catchy tune is part of the "Songify the News" series (formerly "Auto-Tune the News" — it appears to have been rebranded back in 2011, although I only just discovered that fact now), and, as always, it’s downright brilliant. Here, take a listen:

Raise your hand if you’re going to be singing this out loud at your desk all day!

And in case you need a little reminder of where the source material came from, here’s Noah’s original interview:

The Gregory Brothers, of course, are best known for 2010’s “Bed Intruder Song"; in the four years since its debut, it’s racked up over 122 million views. Not going to lie: Occasionally I still pull it up from the depths of the Internet and rock out to it. For some reason, it never gets old — which, when you stop to think about it, is quite a feat, indeed.

Actually, you know what? Let’s take a listen to it right now. It’s not Throwback Thursday yet, but whatever. I don’t need a reason to get nostalgic. Who’s up for a singalong?