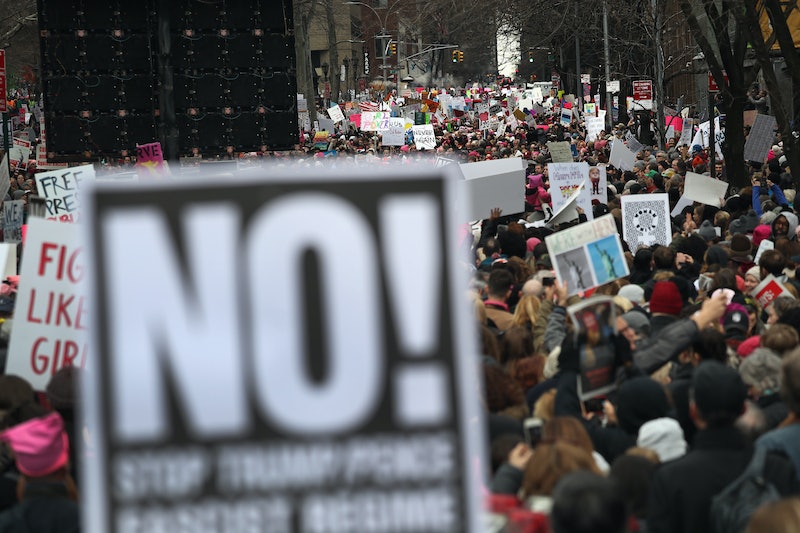 Last month the internet was taken by (shit)storm with the Tumblr and Facebook group Women Against Feminism (WAF). For those of you who don’t know, WAF features women holding up signs explaining why they don’t need feminism…and most of them are incredibly misinformed, ignorant, and confused. With statements like “I don’t need feminism because I can own up to the mistakes I’ve made in my life and do not have to blame them on the completely fictional patriarchy” and “I don’t need feminism because I don’t have to push men down to feel equal to them,” it is clear that these women don’t understand what feminism actually is and don’t care to learn, which would be less disturbing if WAF’s Facebook group hadn’t amassed over 25,000 likes.

Luckily for us, witty internet feminists are at it again with the Twitter account @NoToFeminism. The account is a truly hilarious satire of WAF and delightfully points out how foolish the Facebook group and Tumblr really are. The accounts bio is ‘lol feminism no thanks’ and the tweets feature amazingly bizarre logic, strategic spelling errors, and snarky jabs at anti-feminist logic that will bring tears of joy to your eyes.

The laugh out loud account has gained over 16,000 followers since August 5. We highly suggest that you join them.

Here are some of our favorites:

Need any reminders on why we do need feminism? Check out how Bustle editors responded to WAF.

More like this
Why TikTok Is Flooded With Controversial Videos About "Pick Me Girls"
By Courtney Young
This TikTok Song About An Unrequited Romance Has FYPs In Shambles
By Emma Carey
Why Everyone Is "Soft Tagging" Friends On Instagram Right Now
By Alexis Morillo
19 Latinx Therapists & Mental Health Experts To Follow On Instagram
By Kaitlyn Wylde, Naydeline Mejia and Lexi Inks
Get Even More From Bustle — Sign Up For The Newsletter